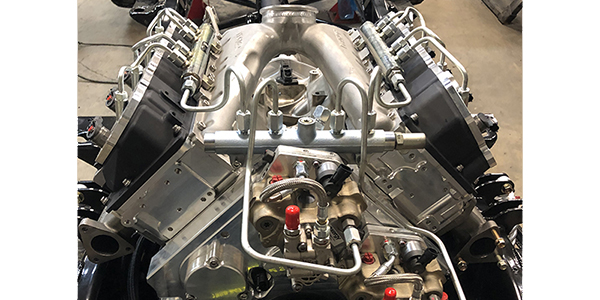 When Tony Burkhard’s Super Stock truck, Last Minute Hooker, suffered from an explosion during the 2019 Ultimate Callout Challenge, he thought his engine might be toast. Luckily, the damage was minimal and his shop, Dirty Hooker Diesel, got started on a rebuild of the 460 cid Super Stock Duramax that would make it better than ever. Find out what went into this awesome diesel build!

During the 2019 Ultimate Callout Challenge (UCC) diesel event, spectators and the team at Dirty Hooker Diesel, got much more than they bargained for. At the UCC event, diesel participants have to compete in a drag race, a dyno pull and a sled pull. Many of the competitors have diesel engines capable of nearly 3,000 horsepower!

It was Tony Burkhard’s turn to put his truck, called Last Minute Hooker, on the chassis dyno. Tony, the owner of Dirty Hooker Diesel in Harbor Beach, MI, watched his truck rev up on the dyno with high hopes, and in a matter of seconds his hopes were dashed. An external part of the engine exploded, erupting everything into flames!

“The Precision turbocharger’s exhaust wheel is friction welded to the shaft,” Burkhard says. “The exhaust wheel is a 5-lb. exhaust wheel and we were spinning 113,000 and it let go on the dyno. When that wheel exited the charger, it caused an explosion that made the hood go up in the air six inches. The whole truck jumped two inches in the front and an inch in the back. Shrapnel was flying around from the charger coming apart.

“When that explosion happened, the metal rolled backwards on the stack – sharp, pointed and jagged – like you’d see in a cartoon. It was so much force, so fast, it just peeled the metal before the whole stack could move away. The stack fell down onto the dry sump belt and shredded the belt.

“A chunk of the charger also knocked off a line and fitting from the fuel rail, so now we had regulators running wide open and 30,000-lbs. of pressure spraying straight up to the bottom side of the hood, causing a shower of hot diesel fuel down on the motor.

“Another piece of fragment put a hole in the intake right above the intake manifold, so the fuel that was spraying up in the air was splashing down and going right into the motor. It just was running wild. It was just inhaling raw fuel and combusting it. We estimate it was spinning 8,000-10,000 rpms for about a minute where it was running off of sprayed diesel fuel.

“For that minute it was running, I believe it had no oil pressure. We tore the motor apart and looked at the bearings. The crank was perfect and the bearings all looked really good. Because no we had no oil going up into the cylinders lubricating the cylinders to the piston, we had one piston get stuck to the cylinder and that bearing was beat up a little bit more than any of the other bearings. However, it didn’t spin a bearing and it didn’t tear up the crank.

Thankfully, no one was hurt, including the team member running the truck and the event crew operating the chassis dyno. And luckily, Tony and Dirty Hooker Diesel got out of the situation with a best-case-scenario, since the part that exploded was external. That being said, the engine still needed to be rebuilt.

Tony Burkhard started Dirty Hooker Diesel in 2000. At the time, the shop was called All Season Service and Sales.

“I was doing snowmobiles and lawn and garden equipment,” he says. “Before long, I got overloaded with boats and I was working out of a 2,000 square-foot shop, which was a tiny, little spot to work. I had also leased a brand-new diesel pickup, and a few guys told me I should go pull it – add a new exhaust, a chip and intake and go pull it – so I did. The next thing you know, I’m a dealer for Bully Dog and got started doing other pickups and that’s how the business started.”

In 2005, Burkhard moved to his current location in Harbor Beach, which is a 22,000 square-foot shop, but the name remained All Season Service and Sales.

“When I moved to the new shop and had the pulling truck, I was trying to figure out a diesel name,” he says. “It became All Season Service and Sales Diesel Performance, which was way too long of a name. It also came out abbreviated as ASS.

“I was on the phone with a friend of mine and I was asking him what to name my pulling truck. He told me to go walk through a marina or go walk around a bunch of boats because everyone’s got names on their boats. At the time, I had a boat in my shop that I was tearing apart and its name was Dirty Hooker. My friend said, ‘That’s it.’

Today, DHD has 15 employees and creates high-quality products for its customers as well as does repair work and full engine builds. The shop does engine work for drag racing, truck pulling and marine applications.

“Usually, the most radical engine builds are my own,” Burkhard says. “The motor in Last Minute Hooker is a super rowdy, awesome motor. How that motor came about was I had a Super Stock chassis here. I was building a new Super Stock truck and everything was new from the ground up.”

Tony has several other pulling trucks DHD runs, and those trucks were taking most of his time. The engine for Last Minute Hooker sat for five years.

Initially, Tony needed to get rid of a heavy motor and make more power, because his old set up was limited to 1,800 horsepower with the motor that was in it. He had a billet aluminum block sitting at the shop, and the build was underway.

“The block is an LSM aluminum block for a 460 cid motor,” Burkhard says. “When we built it, we used a SoCal stroker crankshaft, R&R rods and originally it had Wiseco pistons. When we tore it down after the fire, we used Diamond pistons.

“I had the rotating assembly balanced. Jeremy Wagler made us a set of billet aluminum heads for it. We also have an Exergy fuel system. I did have a Precision turbocharger on it, but that’s what let go on the dyno. The new engine is getting a Jeb’s 106mm turbocharger. We also have a Wagler front cover and it’s got our DHD back cover. We used a PPE dry sump pan and a Peterson dry sump system and tank.

“The engine is going back together with a Wagler Duramax alternate fire camshaft. Eventually, we want to have two 106mm turbos and an 80mm to make a good number on the dyno. This time, keeping the engine together is the main goal.”