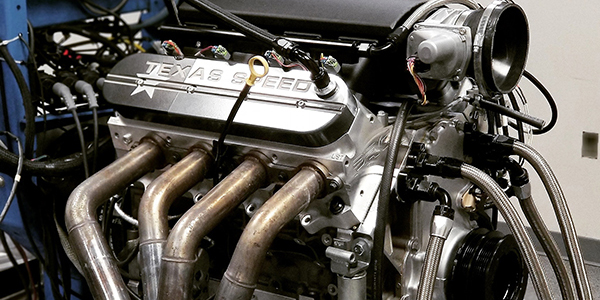 When TV personality Jesse James approached Texas Speed & Performance about turning an old Chevy Cameo pickup into an Ultra4-style racing machine, the shop got busy building this 427 cid Ultra4 LS engine for the owner of West Coast Choppers. Find out what went into this custom engine build!

When Jesse James of West Coast Choppers calls up your shop asking to do an engine build for him, you say yes and provide him with anything he wants to do. That’s exactly what Trevor Doelling and the guys at Texas Speed & Performance in Georgetown, TX did, when they were asked to build a 427 cid Ultra4 LS engine for the TV star.

Trevor is one of two owners at Texas Speed & Performance, which has come a long way since it was founded in October 2002 as strictly a parts resale business. There was no manufacturing in-house at all at the time.

“When we started the business, our mindset and business approach was to appeal to the masses and provide as many different things for the LS/LT market as we can,” Doelling says. “Our first manufacturing that we did take in-house was in 2004 with our cylinder heads. Later on, the next thing that came in-house was our engine program in 2011. Prior to that, we were offering engines that were being built by our machine shop locally.”

With anything Texas Speed & Performance (TSP) has added as an in-house capability, the shop’s goal has been to deliver better quality, machining and processes. Bringing engine building in-house gave TSP far more capabilities in terms of what could be built, the timeliness of the build, the use of better equipment, and other customizable options.

“We’re big believers in investing in the latest technology anytime we bring something in-house,” Doelling says. “That provided us with more capabilities and options for customers when they build an engine. Bringing engine building in-house was just another thing to complete our lineup of what we can offer the customer.”

Today, TSP can do everything in-house utilizing its 60 employees and nearly 40,000 sq.-ft. facility, complete with a Super Flow engine dyno and a chassis dyno.

With all of these capabilities and the engine and parts manufacturing to back it all up, how could Jesse James not choose TSP for a build?

“When Jesse approached us, he was going to be doing an off-the-wall build where he’s taking an old Chevy Cameo pickup and essentially setting it up for Ultra4-style racing,” he says. “This thing is going be seeing a lot of off-the-wall use.”

TSP has good relationships within the Ultra4 racing industry, so the shop looked at one of its existing packages it offers specific for Ultra4, and decided to tweak it Jesse James style!

“The engine is 427 cid and has a 4.155˝ bore and a 4.000˝ stroke,” Doelling says. “The Ultra4 guys are really hard on these setups because they’re having to do everything. They do low-speed crawling as well as high-speed endurance across the desert. The engine is going to see just about any condition you can really put it in.”

The block for this engine is a factory GM, aluminum Gen IV block. TSP cut out the factory sleeves and installed aftermarket Darton sleeves.

“We’re not having to start from scratch as far as complete design of the block, but we’re taking an existing block and making it better,” he says. “We use very strict tolerances and a specific amount of crush to put those sleeves in place. Re-sleeved engines like this are just so versatile – they can be used for off-road applications to drag applications. The platform is super versatile and that’s what’s so great about that engine and why it’s so popular is you don’t have to spend quite as much money as you would going to an aftermarket, six-bolt block.”

Doelling says the sleeving process provides much less cylinder wall distortion due to the harder sleeve material and thicker cylinder walls. When combined with today’s gasket technology, it allows you to push a lot harder with boost.

“You’ll have guys run 28-30 lbs. of boost on these engines as a four-bolt block and able to hold the head on it,” he says. “The re-sleeved block is super versatile because it can do just about everything that anyone is wanting to do to it.”

“Those will have some added power potential as well as a little bit more rpm potential over the LS3 heads, and no one ever wants less power in this game,” he says.

To add to the custom engine build, TSP utilized one of its newest components – a new LS7 sheet metal intake manifold.

“It’s a three-piece design because both of the runners are billet aluminum and they bolt in place to the sheet metal top,” Doelling says. “We design it as a short runner, and offer both a notched and non-notch for those needing additional clearance.”

TSP is also grinding Jesse James’ camshaft in-house, which will be a hydraulic roller and will use Johnson lifters. TSP also incorporated its own rocker arm line, using a set of Texas Speed LS7 rocker arms with roller tips.

“With the LS7 being prone to valvetrain geometry issues, those roller rockers help a ton in solving some of that guide wear that you normally see on the stock stuff,” Doelling says.

With an off-the-wall application in mind, Jesse James wanted this LS engine to make somewhere around 650 horsepower, and Texas Speed delivered on that as well.

“This set up won’t get too crazy as far as compression, but this package made 673 horsepower and 549 ft.-lbs. of torque that’ll be pump gas friendly,” he says.