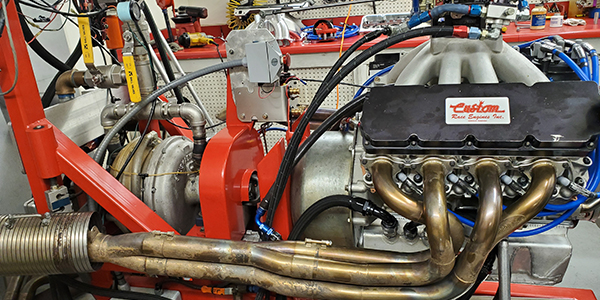 Larry Clark is an engine builder who needs no introduction. Over the years, Clark has built engines for NASCAR, Pro Stock drag racing, drag boat racing, circle track, tractor pulling, and dirt late model. Clark has also been a mentor and an educator to a number of prominent engine builders who have worked at his shop, Custom Race Engines, Inc., in Knoxville, TN. Vic Hill, who was featured in this series a few weeks ago, was one of them.

“Everyone who’s worked for me, remains a friend today,” Clark says. “That’s a good thing, I believe. Vic Hill once said, only two guys in his life have influenced his life more than anyone else, and I was one of them. It was a great compliment. He’s doing well and I’m proud for him.”

Clark first got into engine building after graduating high school and attending a machinist school. From there, he went to work for a Cup shop in North Carolina building engines for future NASCAR racing stars – Harry Gant, Tommy Houston, Jack Ingram, and Richie Panch – to name a few.

“I can remember meeting Ralph Earnhardt, Dale Earnhardt’s dad,” Clark says. “He would come up and hang out from time to time.”

After working in a shop for some time, Larry decided to stop and go back to school at the University of Tennessee to be an attorney. Larry admits, it wasn’t his best decision.

“I hated it,” he says. “My passion was always the engines. Even when I was in law school, I was building engines for various people to pay my way through school. When I got out of school, I didn’t enjoy being an attorney. My engine hobby became my business.”

Law school is what brought Clark to the Knoxville, TN area, where he opened Custom Race Engines in 1984.

“It was probably 1983 or 1984 when I first met Scott Bloomquist,” he says. “I redid the cylinder heads on one of his engines for him. In the late-‘80s, I did some work for him for several years and we grew as a business and really got involved in the dirt stuff in a big way in the early ‘90s. We took a different approach to it from a drag race, horsepower perspective. We were able to design and develop a lot of new pieces.

“There was a point in time that we just had some dominating pieces. We won championships with Freddy Smith, Billy Moyer, Dale McDowell, Scott Bloomquist, Steve Francis, and Casey Roberts. Also, Chris Madden has won back-to-back Crown Jewel races (USA Nationals, $50,000 and North-South, $50,000) with our RY45 engine in a Bloomquist car.”

“We were at a pinnacle in 2006-2010,” Clark says. “We were on top of the world, but I got lazy. I went through a bad divorce. Then, I met an incredible lady who is now my wife, and basically, I wanted to do some other things. About three years ago, I decided that I wanted to retire. My son Jeremy has worked here 22 years, since he was 19. I turned the business over to Jeremy and semi-retired.”

Larry retired to his place on St. Simon’s Island, GA, where he would play golf, took flying lessons and tried anything that might occupy his time. However, retirement didn’t sit well with him.

“People asked how I liked retirement, and candidly, I was miserable,” he says. “I’m used to doing things and making things and creating things. I enjoy making power. Retirement just didn’t fill my soul.

“About two years ago, I got back involved in the business and I ran into Scott Bloomquist. We started talking about building race engines together again. Since then, we have been doing an incredible amount of development on RY45 Fords. These things are good. We’ve gotten the power curve on them where they’re incredibly good. Right now, we’ve got the best stuff I’ve ever had.”

Clark’s focus has been RY45 Ford dirt late model engines, and they are a platform he says is making a new name for itself.

“It’s an interesting platform and it is the most current platform that Ford offers,” he says. “It is a wide bore spacing piece, which the potential that’s there is unlimited compared to the D platform. The RY stuff, with the way that we’ve got it balanced now, it’s measurably more power and torque. It’s my belief that the D3 stuff is good. We build a lot of those as well, but they’re pretty much maxed out. The bore spacing on the block is a limitation. The cylinder heads are capable of finding 1-2 horsepower, but you’re not going to find 20-25 horsepower. It’s just not there.

“Today, guys are running the wide bore spacing stuff. Power is your friend. The more that we work on the RY45 platform, the better it gets. It’s my belief that eventually it will replace the D3 platform, because it will offer enough gain that, where there’s traction on the big tracks especially, the D3 is not going to run with the RY45.”

For Custom Race Engines’ RY45 build, the block, cylinder heads and rocker gear comes from SRI, but it’s produced and machined by Roush Yates. The block has a 60mm cam tunnel and a sealed crankcase.

“It’s got a lot of options that they have more or less spun right out of Roush Yates’ Cup program for the dirt,” Clark says. “The cylinder head casting that we start with on the engine is the same head that they run in Cup. It’s the FR9 head. With the cylinder heads, the big difference is NASCAR mandates dimensions on ports, port locations and how far you can be off the deck for the floor of the intake port. You can’t change any of that stuff around.

Clark’s good friend and customer Scott Bloomquist complained that his RY45 engine wouldn’t take off. With that in mind, Clark went to work.

“The engine is an air pump,” Clark says. “We work with cylinder head, manifold and cam design to make the thing efficient at certain rpm ranges in the curve. If you look at these late model dirt races, restarts are more critical than racing. There’s more positions changed on these double foul restarts than on the track racing. So the engine has to be able to fire and go.

“The differences in our build are the cylinder head and manifold package and the cam package is totally different than what you would buy if you bought a kit to put together. Most of these engines have been built using a vanilla or cookie cutter package. They’re good pieces. They bolt together and run well, but it’s not a good design for what we’re doing.”

Instead, Clark designs his own billet manifold, which saves weight and can put 20 hp in the engine at certain places in the power curve. The shop also tests a large number of FR9 cylinder heads to find that perfect combination.

“We’ve got half a dozen pairs of cylinder heads that we use as test pieces that we’ve got all kinds of shapes and sizes and different things that we’re running in an effort to see how it changes that power curve,” Clark says. “Everybody is interested in how much power an engine makes. That is the wrong question to ask. In a late model dirt car, where they have to run over a 5,000 rpm power band, you want to know how broad is that power curve. That’s what makes it where they can drive it. They can drive it when there’s traction. It’s got a lot of torque and power to race and turn the car, and they can drive it in the slick. They can work the throttle pedal because the power curve is smooth. That’s the key.”

While the manifold, cylinder heads and cam are the real stars of the RY45, Custom Race Engines also incorporates either a Sonny Bryant or Callies billet crankshaft, a COMP Cams camshaft, Mahle or Diamond pistons, Dyers or Carrillo connecting rods, Total Seal or Mahle piston rings, Clevite bearings, an MSD ignition, and an Xceldyne belt drive.

“Here’s why I love this platform – it responds to change,” Clark says. It may go the wrong direction, and that’s okay. It will give me as much data and direction if it loses power when I change something as when it gains power. We’re constantly evaluating and looking at what’s going on in the power curve and how we can manipulate the power curve to move the power around in the curve. How do we put more power in the middle? How do we change it to where it makes and runs harder in the top? The engine does respond to changes unlike a lot of other engines that I have worked on through the years. That to me, makes the thing all the more desirable for an engine builder to work on.”

With Larry, Jeremy and Custom Race Engines working hard behind the scenes on these RY45 Ford engines, they’ve got them dialed in to churn out more than 900 horsepower across a smooth power curve that his clients love.