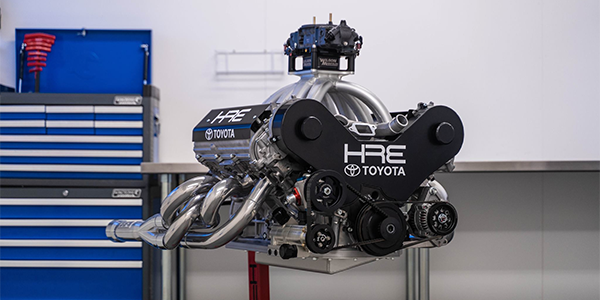 Engine building isn’t necessarily rocket science, but having spent three years working for Rocket Lab, the New Zealand space program, as the leading hand of propulsion responsible for engine production certainly can’t hurt. That’s the background of Tom Hughes, which has translated into many high-end race engines being built throughout his career and at his new engine shop, Hughes Race Engineering. Find out what aerospace engineering went into this Toyota/Lexus 1UZ-FE V8 race engine!

Engine building isn’t necessarily rocket science, but building today’s high-end race engines certainly involves elements of space age technology and engineering, so the knowledge can definitely help. And it has helped Tom Hughes, who spent three years working for Rocket Lab, the New Zealand space program, as the leading hand of propulsion, responsible for engine production. That background, among other things, has translated into many high-end race engines being built throughout Hughes’ career.

Growing up racing motocross, Tom Hughes gained an early love and flare for anything mechanical. At age 16, he took an apprenticeship with a reputable engine builder as an automotive machinist where he spent 7 years working on dirt track, circuit and motorbike race engines. After his stint with Rocket Lab, Tom then founded Hughes Race Engineering Ltd. in early 2017.

“After playing with the idea for many years and my love for engineering still lying with high-end race engines, starting this shop was always a case of when, not if,” Hughes says.

According to Tom, Hughes Race Engineering (HRE) was created to challenge the standards offered to the racer, whether it be in service, product or race team support.

“Learning what I did in aerospace, I have incorporated that standard of workmanship into everything we do as a race shop,” he says. “From build documentation, quality control, engine development and even workshop layout and function. Our experience is mainly in 4-valve naturally aspirated engine tuning. The passion for high-revving, 4-valve engines is something I have carried since a young age with a 4AGE making its way into my 1976 Toyota Corolla at 15 years old.

“As we grow as a company, I expect different opportunities to arise and am not afraid to take on engine builds that require outside-of-the-box thinking.”

As a start-up race engine shop, HRE has a good amount of machinery, however, most serious automotive machining is currently outsourced until the shop is more set up.

“We always work with the best machine shops available and double-checking quality is a must,” Hughes says. “The HRE facility is made up of a machine shop, office, engine assembly clean room, grinding room, and cleaning area.”

Currently, HRE is just Tom, but occasionally a buddy or two come to lend a hand when needed. Despite being just a one-man shop, HRE still churns out incredible engine builds such as its most recent creation of a Toyota/Lexus 1UZ-FE V8 engine for New Zealand Speedway Super Stock racing.

The 4.0L, 242 cid, all-alloy 1UZ-FE debuted in 1989 in the first-generation Lexus LS 400/Toyota Celsior, and the engine was progressively released across a number of other models in the Toyota/Lexus range. The engine is oversquare by design, with a bore and stroke of 3.440˝ and 3.250˝, respectively. It has proved to be a strong, reliable and smooth powerplant with features such as 6-bolt main bearings and belt-driven quad-camshafts.

Since HRE is still a relatively new name to the New Zealand engine building scene, the 1UZ-FE engine was built and developed as a shop promo engine to show what Hughes could offer as an engine package and service.

The block was bored, decked and honed, and HRE lightened and balanced the rotating assembly.

“Being a development engine, we had some huge learning curves along the way,” Hughes says. “Every aspect of this engine has had multiple attempts at getting it to the point we are at now, and I still believe there is more horsepower to be gained, even with the class restrictions.

“As we have grown, we have met some very helpful people who have pointed us in the right direction, whether it’s with cylinder head design, camshaft lobe profiling, bottom end orientation or dry sump systems. Huge leaps and bounds have been made in this one-year engine project.”

With all the kinks worked out and some space age engineering behind this Toyota 1UZ-FE, the engine cranks out 501 hp at 8,100 rpm and 378 ft.-lbs. of torque in its restricted class format. Time to go racing!

Advertisement
In this article:Elring, Engine of the Week, PennGrade Motor Oil, Toyota