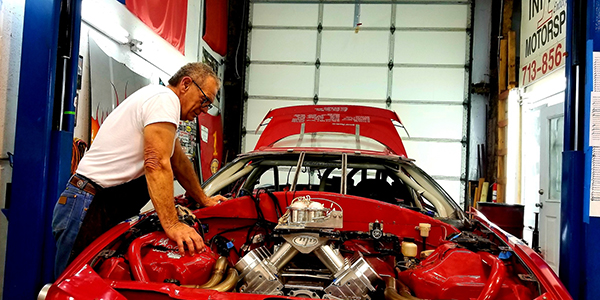 My passion for Bonneville began in 1963 in Mrs. Combest’s 2nd grade class in Electra, TX. Our class had just received our Weekly Reader Newspaper with an article written about a young Craig Breedlove building a land speed car in his dad’s backyard to run over 400 mph at the Bonneville Salt Flats! I was so intrigued!

Bonneville Dreams and an Influential Woman

Sipping my cup of coffee at a local café, a familiar old timer walked by and acknowledged my 200MPH Club red hat hanging on the corner of an adjacent chair. He smiled and asked me if my mother had taught me, “not to wear your hat at the table.” I chuckled and replied, “As a matter of fact, she did!” As I looked up, I saw that his head was adorned with the same red hat…only quite worn and faded from time. We shook hands and I offered him a seat at my table. We talked about our love for Bonneville as we ate breakfast and I asked if he was returning this year. He looked down at his breakfast plate and said, “Probably not”. He went on to share that he had lost his passion for the Salt. That comment struck me hard…I know about the long hours after work, on weekends, the expense and the sacrifices made, but it made me think about my own level of passion. I am so fortunate to hold two world records at Bonneville and my passion is still growing!

My passion for Bonneville began in 1963 in Mrs. Combest’s 2nd grade class in Electra, TX. Our class had just received our Weekly Reader Newspaper with an article written about a young Craig Breedlove building a land speed car in his dad’s backyard to run over 400 mph at the Bonneville Salt Flats! I was so intrigued! I recall asking Mrs. Combest as to why someone would want to build a car to run 400 mph and where was this Bonneville Salt Flats? Instead of just blowing me off and sending me back to my seat, she embraced my enthusiasm.

She explained to me that there are people in the world who desire to do something extraordinary and will do whatever they have to do to accomplish those dreams. I wanted to know more about the Bonneville Salt Flats and where Utah was. She smiled and sent me to the school library to research. I carried my Weekly Reader to the library and excitingly asked Ms. Smith, the librarian, for assistance. She too was compassionate about my inquiries. Remember, in 1963 we didn’t have Google! We looked through several of the Britannica Encyclopedias for Craig Breedlove and the Bonneville Salt Flats. I was disappointed we were unable to find anything on Craig, but I learned a lot about the Bonneville Salt Flats and Utah.

I excitedly returned to Mrs. Combest’s class, where she had me stand up in front to share what I had learned. I held up my Weekly Reader and pointed to the Craig Breedlove article and boldly shared that one day I would build a car to run on a salt lake bed in Utah, and it would be named after Benjamin Bonneville – a U.S. Army Officer who explored the area in the 1800s for the government. I didn’t know how then, but I believed I would accomplish my dream, just as Craig Breedlove did before me.

In 2017, I had three of my boyhood dreams come true. One dream was to one day drive a 1953 Studebaker at Bonneville. I broke a 10-year-old land speed record and set a new one over 200mph that got me inducted into the 200MPH Club. Attending the 200MPH Banquet was an incredible honor for me. I met my mentor, Craig Breedlove, who was present, when I received my award! My wife, our son, his wife, our daughter, her husband, my team partner Gene McFaddin and our crew, were all in attendance. I visited with Craig and shared how he influenced my life 54 years earlier with the article from the Weekly Reader. He was taken by my comments and was very humbled. We shook hands and I thanked him again for his inspiration that allowed an 8-year-old boy grow up to be the grateful man I am today. We still share a lot of the same dreams of setting new land speed records at Bonneville….

This experience gave me an insatiable desire to reconnect with Mrs. Combest. I wanted to share how powerful her words were and how her positive actions had influenced me, not only at Bonneville, but in my life! Sadly, she passed a few years earlier, and although she is no longer with us, I owe her immensely and will make a positive effort to treat other young minds as she treated mine.

Advertisement
In this article:Bonneville Salt Flats