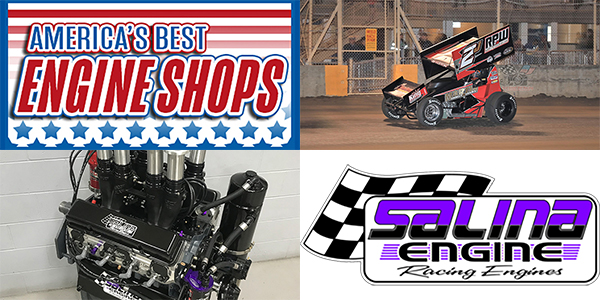 Are you one of America’s Best Engine Shops? If so, see how you might stack up against Salina Engine located in Salina, KS. They have entered the Race category.

Are you one of America’s Best Engine Shops? If so, see how you might stack up against Salina Engine located in Salina, KS. They have entered the Race category.

In the late-2000s, the shop’s focus shifted to other business opportunities and the volume of race engines it supplied declined.

However, beginning in 2017, Salina Engine brought on new personnel and is back up to full capacity. Looking to pick up where the shop left off, it has reestablished connections with the industry’s top manufacturers, and is taking on work from all forms of racing.

The customer experience is also an important part of what Salina Engine does. The shop works closely with its customers, and the shop’s part of the equation doesn’t end at the point of sale. The shop will work closely with you to make sure an engine is performing on the racetrack to its optimum potential.

Salina Engine also never stops improving its product. R&D is critical at Salina, and it’s what keeps the shop ahead in this competitive industry. In that same vain, Salina works closely with top vendors in the industry to deliver a product of the highest quality.

Adam Cofer is one of Salina Engine’s newer employees who has helped drive the shop forward to reach its full potential, and he has plenty of experience building 360 and 305 Sprint Car engines.

Many people familiar with Salina Engine can identify the shop’s work due to its signature look – a painted gray block with black external components. Salina Engine was founded in the 1960s by Russell Roberg as Salina Engine Supply. Throughout the ‘80s ‘90s and 2000s, the business was run by Russell’s children, with his son Tod acting as president of the company.

Salina Engine is capable of doing most machining operations in-house, only outsourcing its CNC cylinder head porting and any necessary cam tunnel or lifter modifications to various outside companies. The shop operates out of a 12,500 sq.-ft. facility that consists of a front office area, parts and storage area, machining area, two assembly rooms, a break room, dyno room, and a tear down area. Keeping Salina Engine running like a well-oiled machine are three machine shop employees, some office staff and owner Tod Roberg.

The shop builds engines like this ASCS 360 Sprint Car engine. It is the shop’s Base package, which cranks out more than 700 horsepower and almost 600 ft.-lbs. of torque – enough power to achieve 120+ mph on most tracks!

“The intent of our base package was to attempt to curb the cost of 360 Sprint Car engines,” Cofer says. “Most high end 360s range anywhere from $45,000 to $55,000 for a complete new engine. With our base package, we were able to get this price down to $35,000 and still have a reliable, lightweight and powerful combination.

“We offer packages with price points above this, and for professional race teams, we suggest those higher packages, but this package will compete on most dirt track surfaces right along side the higher priced offerings.”

You can enter the 2019 America’s Best Engine Shops contest at www.topenginebuilders.com.