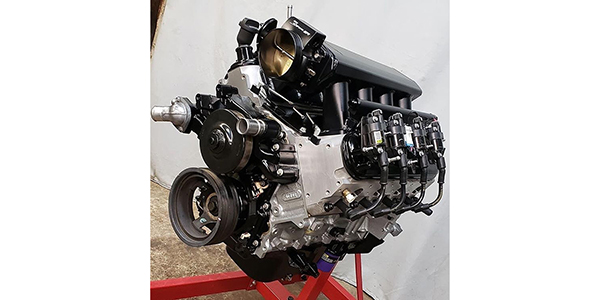 The world of hot rods and horsepower commonly utilize the benefits of stroking an engine, and for many performance builders, it’s more commonplace now than ever before.

Years before I was old enough to drive, magazines were the closest my allowance got me to a muscle car and one of the first things I picked up from the editorial was that bigger is better. Cubic inch displacements of 426, 429, 440, 454; I was enamored with numbers like this and Detroit’s top performers of a time past with these monsters lurking under the hood. I formed an allegiance with cubic inches and power; make or model didn’t matter.

A true understanding of what these numbers meant came along with a career as a technician, and while originally paying homage to what I perceived as the pure genius of Detroit’s engineers, the more I became involved with performance, the more familiar I became with the term “stroker.” The world of hot rods and horsepower commonly utilized the benefits of stroking an engine, and for many performance builders, it’s more commonplace now than ever before.

Siebert Performance in Topeka, KS, is one such shop that lives by the longer stroke. “I would say most everything we build is stroked,” says Luke Siebert, owner of Siebert Performance. “We do more stroking than building it the way it came from the factory just because everything we build anymore is really a race engine. Even down to your big-block Chevy stuff, we rarely do a 454 or 468 anymore, usually they’re 496 and up.”

Siebert works with customers to build an engine that best suits their needs and budget, taking advantage of stroking an engine whenever possible. “Number one, it’s just easier for us to take more advantage of available cylinder heads these days,” Siebert says. “As technology has delivered better and better flowing cylinder heads, if you don’t increase the stroke, the only way you’re going to be able to take advantage of them is by spinning any given motor at higher rpm, and not everyone has the budget to spend on an expensive valvetrain, so the extra stroke, just by simple math, is going to lower that rpm range.”

Before beginning any build, Siebert considers all options so they know exactly what they are getting into. “Starting with the short block, you have to make sure you can fit your given stroke and the connecting rods you’re going to use within the actual pan rails of the block without having to machine excessively,” Siebert says. “The next thing, and this is very prominent on a small-block Chevy, is the rod to camshaft clearance. When you start getting big enough, you’ve got to go to a small base circle cam, and sometimes we have applications where we’re doing enough stroke that we have to go from the 2.100˝ standard rod journal down to 2.00˝ inch or even the 1.889˝ ‘Honda’ rod journal, just to reduce the diameter of the connecting rod so we can get more stroke.”

Siebert Performance offers a number of engine packages, with GM’s LS being some of the most popular. Siebert enjoys the opportunities that come with building an LS engine. “One of the reasons why we like the LS engine is you don’t really have any camshaft clearance issues with the connecting rods and stock cam height,” he says.

Siebert cautioned about short cylinder length on the stock block of an LS engine, warning that if you go longer than a 4.00˝ stroke, you’ll start pulling the piston skirt pretty far out the bottom, so he recommends aftermarket blocks with longer cylinders if you’re going longer than that.

All Siebert Performance’s machine work is done in-house with the only exceptions being the equipment they don’t have; a line hone and a crank grinder. Siebert also offers custom-built carburetors, rebuilding and calibration. “That’s really what I feel one of our benefits is over some other engine shops; when you come to us, you’re not just going to get an engine, you’re going to get a whole package, if you want it, and know it’s going to be tuned properly. We also provide tech advice from the carb to the pan,” he says.

Siebert’s passion for what he does carries on after hours with his ‘67 Camaro bracket racer. Under the hood sits a 408 cid LS, hydraulic roller carbureted mill putting out 742 horses at the crank. It’s all steel and cruises through the traps in the 9.70s at 140 mph. We’d say that’s some pretty good advertisement for your business.

Next stop is the far east, where we caught up with Carmen Trischitta, owner of CT Performance in Vineland, NJ. Old school quality is what they are known for and they build a wide array of engines from motorcycles to imports to domestic performance. “It’s all in the details,” Trischitta says.

One of the more common builds for them is again the popular LS engine. Trischitta said that a lot of people fall under the spell of internet videos with claims of big horsepower on stock bottom-end LS engines. They want to save money this way, but when they find they’ll have more money in building it stock, it makes the stroker an easy sell for CT Performance.

“You know what they say, ‘there’s no replacement for displacement,’” Trischitta says. He has always been into racing and loves the competition, stressing that reliability is one of the most critical aspects of a performance engine.

“Valvetrain parts are critical for an engine to make good, reliable power,” Trischitta says. “That’s what it’s about; good reliable power. It all comes from the quality of the work you put into what you’re building. Everything performance I do, when I hone it or bore it, whatever I do it’s got torque plates and the mains are fully torqued. I try to simulate running conditions as much as possible throughout the machining.”

Regardless of engine, there are no shortcuts at CT Performance, but when building a stroker, the amount of detail climbs to a whole new level. “When you’re taking away from stock and you’re adding stroke, you’re going into a whole other dimension and everything has to be checked,” he says. “Everything needs to be mocked up. To do it right, it has to be fully mocked up, checked, taken apart, then final assembled; it’s a lot of work.”

While building a proper performance engine is a lot of work, and stroking an engine adds even more, the end result is always worth the effort, because bigger is always better!

When it Comes to Stroker Engines – Bigger is Better