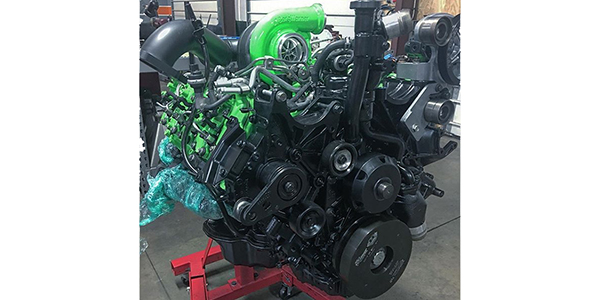 Just like most who become enamored with diesel engine work, Ray McClelland Jr. started tinkering at a young age. A new transmission, new clutch, upgraded tune and a turbo, and now he’s made it a career creating diesel performance at his shop, Full Throttle Kustomz Diesel. Ray recently finished this LML Duramax build, which is ready to take on a drag race, a sled pull and a dyno run, but it hasn’t forgotten its street manners. Find out what went into the build!

Growing up in the Pittsburgh area, Ray McClelland Jr. learned a lot from watching his dad work on cars and run his performance shops. He would even join him at the race track to see the hard work pay off. Ray became more and more engrained in the world of motorsports every day. He then got into racing dirt bikes for KTM where he began tinkering with engines.

“I was always the kid who would take things apart and try and rebuild it,” McClelland Jr. says. “With all my dirt bikes, I was tearing carburetors apart and seeing how things worked. I would play with the jets and play with everything to see how I could better it – even at a young age.”

Ray ended up getting a Dodge Ram in 2007, and heard of people making 600 horsepower – at the time. With the piquing his interest, Ray now had a new goal to strive for!

“I started tinkering with things and got a newer transmission,” McClelland Jr. says. “I ended up upgrading the clutch and upgrading the tuner, which led to a turbo. That started my whole craze with diesel performance.”

Ray’s dad now has a performance shop out in California, but Ray set up his diesel shop, Full Throttle Kustomz Diesel, in Boardman, OH in 2016. The five-employee, 6,000-sq.-ft. diesel facility has a chassis dyno, engine and transmission assembly rooms and tear down rooms. Full Throttle Kustomz (FTK Diesel) pretty much does it all when it comes to diesel performance.

“We do Duramax mostly and a fair amount of Cummins and Powerstrokes,” he says. “We’re a specialty shop, so we’re not a general repair like most of the diesel performance shops you see. We don’t accept just anybody, but we’re more than happy to refer people to other reputable diesel repair shops.

“We build engines from mild to wild. Even our stuff that just has basic tuning, we’ll do some substantial upgrades. With Duramax engines, they’re pretty prone to holes in the pistons and breaking crankshafts. Even if it is just a basic engine build, we’re building it with that in mind. We use forged cranks, updated cast pistons, forged rods, hardened bearings, and typically an alt-fire camshaft to try and balance out the distribution of load on the crankshaft.

“Our low end works great for the guys who are towing and street driving. Then we have a handful of trucks that are over 2,000 horsepower with Cummins and Duramax platforms.”

FTK Diesel works closely with outside machine shops as well as Wagler Competition for its machine work. The shop also does custom tuning and transmission builds in-house.

Typically, FTK Diesel’s mild to wild engine builds fall into three different categories, and the shop will adjust them based on a customer’s needs. Recently, the shop built an LML Duramax engine for a customer who wanted to do it all.

“This engine is in a 2014 Chevy 3500,” he says. “The customer wanted a vehicle that he could drive on the street, but still be able to put a good dyno number down if he was at a truck event. He also wanted to be able to drag race and truck pull it if he wanted to. He kind of wanted to have the option to do everything, but he wanted to keep street manners in mind.”

The customer told FTK Diesel he wanted 1,000 horsepower and off the built went.

“We sent the heads and block to Wagler [Competition],” McClelland Jr. says. “We had them open up the stock cylinder heads and they did a five-angle valve job. On the block, we always have the line hone checked and the block surface checked.”

For the internals of this all-around Duramax build, FTK Diesel incorporated a Wagler Competition rotating assembly, which has a Callies crank, Wagler rods and de-lipped, cast pistons, as well as Wagler’s alt-fire camshaft. The shop always uses ARP hardware, and this build has ARP for the main studs, rod bolts, the rocker support bridge and head studs.

“Depending on the build, we use Steed, AFE or PPE manifolds,” he says. “This build uses a PPE manifold and has compound turbos – 80mm and 69mm. We used S&S Diesel Motorsports for fuel injectors and injection pumps. We used a Fluidampr for the balancer, a SunCoast billet flexplate and a Mishimoto intercooler.”

Behind all of that, FTK Diesel has a few different levels of Allison transmission builds the shop can incorporate.

To top off the LML Duramax build, as well as all of the engines FTK Diesel sends out the door, Ray adds AMSOIL for peak performance.

“My father has always been a big fan of AMSOIL, so it’s been in my family’s vehicles for the majority of my life,” he says. “Personally, I’ve been using AMSOIL since 2007 in my stuff. I even put it in my lawnmower. We use it in everything.”

All said and done, the LML Duramax cranked out 998 horsepower and 1,860 ft.-lbs. of torque, making this one satisfied customer!