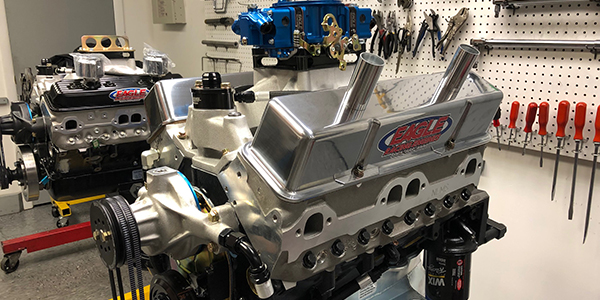 With an extensive background in building race engines, Mike Hedgecock has been running Eagle Racing Engines for nearly 40 years! He now runs the shop with his son and grandson churning out complete engine builds like this 358 cid National Late Model Chevy engine. Find out what goes into these race-ready builds!

When Mike Hedgecock was in college trying to be a mechanical engineer, he paid his way through by working for a guy who had a parts store and a speed shop in Roanoke, VA. Unfortunately, college didn’t pan out for Mike, but a love for cars and engines had developed, and Mike’s new career path was set before him.

“The speed shop had a Pro Stock car and I started going to races with them and got bit by the bug,” Hedgecock says. “I got really into cars and engines. That was in 1969 or 1970. Then, I worked for another engine builder locally for a few years. Then, I moved to West Virginia for a couple of years and worked for a race engine shop there. Then, I moved to Knoxville, TN to work for a parts warehouse.

“At that time, several people who I had built race motors for on the side, convinced me to open my own business. I officially opened Eagle Racing Engines in 1980.”

The Knoxville, TN-based Eagle Racing Engines began by building dirt short track motors. In the late-‘80s and early ‘90s, Hedgecock got into drag race engines and nitrous engines, which turned into big business.

“That was my whole business for years,” he says. “We won several IHRA championships and were big with Top Sportsman and Top Dragster – we covered drag racing thoroughly. We got up to eight or nine employees.”

In the mid-2000s, Hedgecock decided to slow down a little, decreasing his staff. Today, Eagle Racing Engines still builds drag engines, dirt track engines and circle track motors for series such as RUSH, NLMS and Southern Clash. Mike’s son Chad and grandson Cory now work in the shop as well, alongside Mike as his only other employees.

Eagle Racing Engines is a full machine shop with 5,000 sq.-ft. of space and the capability to do everything in-house other than crankshaft grinding.

“We’ve had our good days and bad days,” Hedgecock says. “But overall, we’ve been very successful. We do a great deal of crate engines now. Circle track has been good for us.”

One of the shop’s best-selling engines is its 358 cid Chevy engine for the National Late Model Series (NLMS) and Southern Clash.

“That’s a pretty good engine program for us,” he says. “We start these engine builds with a Dart SHP block. We have a four-axis RMC machining center, so we use that to do all of our boring and decking block work. All these motors will get bronze lifter bushings in them. We also have a Sunnen hone to line hone the blocks and get the finish where we want it. These engines are 358 cid and are a stock 4.000˝ stroke and 4.030˝ bore.”

The rules of the sanctioning bodies require these engines to feature either a roller or a flat tappet, depending on which sanction. Eagle Racing Engines will run Brodix spec cylinder heads, which can’t be modified. The pistons have to be a flat top and the engine has to have a 5.700˝ rod. In addition, no tie valves can be used, and the engines must be set up with wet sump oil systems.

“We can’t do anything exotic to them because of the rules,” Hedgecock says. “We typically use Callies or Manley rods, but the sanctioning bodies give you a list of rods we can use – they just need to be 5.700˝. We use Callies or Manley for the crankshaft as well. For the pistons we use CP, and we use COMP Cams for all of our valvetrain stuff.

“We will balance the crankshaft in-house and fit the Calico-coated bearings and set the clearances. From there, we will do a fresh valve job and surface the heads to get them to the minimum cc that we’re allowed to go to. It’s a thorough build.”

To add to the race package of these 358 cid Chevy engines, Eagle Racing Engines will sell them with the carb, fuel system and the shop’s own stainless-steel headers.

“We try to offer a complete package,” he says. You don’t need anything other than to stick a fan on it, stick it in the car and bolt the headers to it.”