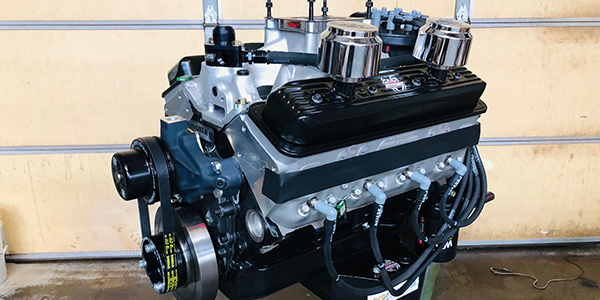 Steve Hendren can thank his dad, Bill Hendren, for teaching him everything he knows about engine building. In fact, the whole Hendren family is an integral part of the evolution of Hendren Racing Engines in Rutherfordton, NC. It’s that family formula that helps crank out 140-160 engines a year like this GM 604 engine. Find out what goes into making this a mean race engine!

Steve Hendren can thank his dad, Bill Hendren, for teaching him everything he knows about engine building. In fact, the whole Hendren family is an integral part of the evolution of Hendren Racing Engines in Rutherfordton, NC.

The original business was founded in 1976 in Santa Cruz, CA, where the Hendren’s race shop and speed shop focused on circle track, dirt track, drag race and offshore marine engine work and parts. By the mid-‘90s, a bad economy and the fact that much of the shop’s business was coming from the East coast, prompted Bill Hendren to move the business to North Carolina in 1995.

Steve began working for his dad when he was around 12 years old, and put his first engine together just a year later. Steve’s dad Bill passed away in 2011, and today, Steve and his brother Mike run Hendren Racing Engines along with their mom Bettie. Steve’s son Alex has also joined the family engine shop.

“When we moved to North Carolina, we were building dirt late model, super late model engines and limited late model engines as well as some drag race stuff,” Hendren says. “Around 2004, several racing series started introducing the GM crate engine and my dad recognized that was the way racing was going to start trending, so we started getting into that and became authorized builders to do all the crate engine stuff. We’ve done that almost exclusively since about 2010.”

“We build about 140-160 of those a year,” Hendren says. “We do everything in-house – nothing gets subbed out. It’s primarily my brother, Alex and myself doing the work. We have 7,500 sq.-ft. and we’re somewhat of a modern shop, so we don’t need 20 guys to do the job of three people.”

With roughly 150 engines being built each year, Hendren Racing Engines’ bread and butter remains the GM 604.

“We started building GM 604 engines back in 2004,” he says. “Not only do we freshen and rebuild them for people, but we’ll take brand new 604s out of the box, completely disassemble them and re-machine the entire engine per the GM specs. What we’re doing is what GM can’t do as far as being a production line-built engine and we’re making them all equal.”

According to Steve, because they’re production line-built engines, you see stacked tolerances all the time and you see tolerances out of spec. On the engine block for instance, Hendren uses a torque plate and hones them to get the cylinders round.

“Somehow, GM manages to make square bores, but that’s another story,” he says. “We line hone and deck the block to within spec. As far as the cylinder heads go, I’ve got a Newen BB2 CNC machine and we do all our valve jobs on that. We correct the valve job and get the combustion chamber volume correct.”

Due to the rules of the racing series these engines run in, internal parts for the 604s must be from GM.

“These engines have to remain 100% GM,” Hendren says. “Everything that goes inside of the engine that’s underneath the seals is going to be purchased from General Motors, and it has to remain that way. Otherwise, it would be an illegal engine and we don’t do illegal engines. Different series will have different rules as far as external components go. We work with different manufacturers to produce those components such as Pro Fabrication on headers, Willy’s or David Smith for carburetors, and we also build our own stuff. We use high-velocity head spacer plates and we use Jones Racing Products or KRC front drives and water pumps.”

“We’ve got a Dyno Jet chassis dyno in-house, and we constantly are testing new products, new fuels, new headers – anything that’s made for these engines we’re constantly testing,” he says. “We’ve got our own house car, so that allows us to find what’s best.

“Depending on a guy’s drivetrain, the 604 engines will give you 410-420 horsepower at the rear tires. It’s about the same on torque. These engines are 9.5:1 compression and run on oxygenated race gas or e85.”

Advertisement
In this article:Elring, Engine of the Week, PennGrade Motor Oil