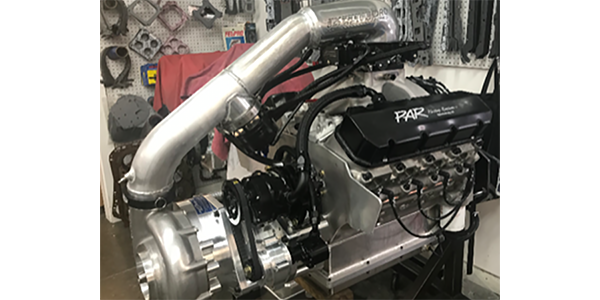 Scott Duggins of PAR Racing Engines will build anything from a 434 small block to a 860 cid big block, including this blown, ProCharged Top Sportsman engine. Find out what went into this fast, high-horsepower build!

In the late-‘70s, Scott Duggins’ dad would build engines in his home’s car port, which translated later into starting a full-time engine rebuilding service. Scott was quick to join his father at the shop and soak up as much engine knowledge as he could.

“I was always intrigued by the performance side of it,” Duggins says. “I started building performance engines in the late-‘80s. That’s what got me started.”

PAR Racing Engines operates out of 7,500 sq.-ft. and has eight employees who do all engine work and machining in-house using modern CNC equipment.

“That’s one thing we take pride in is being able to fix, repair and re-machine all here in-house,” he says.

“We have an RMC CNC machine that we use to do all of our blocks and our cylinder head work,” he says. “We double o-ring the block and the cylinder head because that really holds the head gaskets well. We build these engines using Brodix 24-degree heads and a blow-through carburetor. We’ve made over 2,600 horsepower.”

“The reason I jumped on building these engines is it’s very affordable horsepower,” he says. “We’ll build these engines from 540 cid all the way up to 600 cid. We build them with front mount blowers, but also use side mount blowers whenever we don’t have enough clearance for the front mount stuff. We call those side slingers. Both of them will produce about the same power. We’ve actually come up with a reverse mount, side mount for dragsters. It should be the fastest dragster blower, and we’re working with ProCharger on that.”

The blown Top Sportsman engine is a hipped Brodix block with 4.840˝ bore spacing. Over the years, PAR has really refined the build.

“We’ve refined the fuel system, the cylinder head combination, the camshaft, the compression ratio – we’ve refined this engine build,” Duggins says. “At one time, with a blow-through carburetor, about 1,600 horsepower was the max anybody was getting. We have 1,000 horsepower over that now with the same blow through and only running around 28 lbs. of boost. A lot of the fuel injected stuff that we do will run up to 50 lbs. of boost. Whenever you get it to a boost level like that, you really need to go to billet stuff whenever you start getting up in that 50 lbs. of boost range to really get the reliability out of it. We can build a very durable, 2,600 horsepower engine.”

“All of the port work on the manifold and stuff like that is done here in-house,” he says. “We do all the tubing, piping and welding fabrication all in-house too. We also use BAM roller lifters, which run on a DLC-coated pin because the lifter doesn’t have a bushing or bearing to ride on.”

These Top Sportsman builds also get APD Fuel Systems and carburetors, which are very instrumental in helping to supply the high horsepower needed.

Now all that’s left to do is go racing!

Advertisement
In this article:Elring, Engine of the Week, PennGrade Motor Oil

Commentary: Cheers to a New Decade