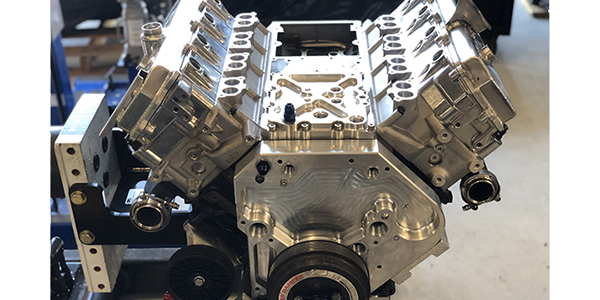 If you’ve ever rented property, an apartment or a home, you’ve likely had to deal with a landlord, and I’m sure you’ve had both good and bad landlord experiences. You hope your landlord is a nice person and lets you be, but is also responsive when needed. Jared Alderson, owner of Kill Devil Diesel (KDD), has one of the coolest landlords you could ask for.

Kill Devil Diesel is located in Poplar Branch, NC, and Jared’s long background in engine work and his years spent working for Monster Jam itself have come in handy on the diesel side.

“I had worked at a shop for seven or eight years doing machine work, and then Feld Entertainment had an engine building position open up for Monster Jam, which owns Grave Digger,” Alderson says. “I worked there for several years building 540 cid blown alcohol motors for the monster trucks. Feld Entertainment is one of those big companies that nobody’s really heard of. They own Monster Jam, Disney on Ice, Supercross, and a lot of those big traveling show productions. I had been around motorsports, mud bogging and the monster truck industry for a while, and then I started working over here at the Grave Digger compound.”

In the time Alderson was building monster truck engines, he continued doing diesel engine work on the side. Eventually, his diesel work took off to a point where he couldn’t continue to do both anymore.

“I reached a point where I had to focus on the diesel stuff,” Alderson says. “As much as I liked the job with Monster Jam and working for a big company like Feld Entertainment with the benefit and security of a 40-hour-a-week paycheck, we had too much growth potential with Kill Devil Diesel to ignore it. I was the restriction. I was holding that back.”

Alderson stopped working for Monster Jam just earlier this year, and his focus is now 100% on Kill Devil Diesel, a 7,200 sq.-ft. performance diesel engine and machine shop with four full-time employees and some part-time staff.

“We’re steeped in motorsports lore,” he says. “The Kill Devil name comes from us being just outside Kill Devil Hills, NC. We’re right outside the Outer Banks. We’re in the middle of it all. There’s blown alcohol engines here on the dyno on the property and a lot of good connections have come out of that relationship and my time at Monster Jam. One of the parts I really enjoyed most about the job was the development and the collaboration with different people and different vendors in the industry. I wouldn’t have been afforded as many of those connections on my own, so Monster Jam was a huge help.”

Having spent 40 hours a week building 1,400-1,500 horsepower blown alcohol motors has allowed Alderson to carry over much of that knowledge into the diesel world.

“We’re an engine and machine shop,” he says. “We’re not a repair shop, so we never really see the truck. We do a lot of engines, cylinder heads, cam kits, pistons, and other parts and pieces that we make here in-house. We’re involved with the ‘big three’ – Powerstroke, Duramax and Cummins. The 6.0L and 6.4L Powerstroke stuff is what keeps us busiest, and a little bit with the 6.7L and 7.3L.

“We try to offer as much USA made and as much house-branded products as we can in order to have as much control over what’s going out the door. We work with companies such as Mahle, Carrillo, Total Seal and PAC Racing on developing products for diesel platforms. We do all the final machine work here in-house and then assemble everything.”

Alderson attributes some of Kill Devil Diesel’s magnetism towards the 6.0L and 6.4L Powerstroke market to being involved with a couple different race trucks.

“We did an engine for Charlie Keeter in Virginia, and we work with KC Turbos, which is a company out of Arizona,” he says. “That’s brought a lot of attention to us, and again, we’ve been fortunate to have some of those partners and some of those relationships in the industry.”

The partnership with KC Turbos in particular, has led to one of Kill Devil Diesel’s latest engine builds for the turbo company’s race truck, which features a custom, one-off 6.0L Powerstroke engine.

“We to try and push the Powerstroke envelope further every year,” Alderson says. “That’s why the engine for the KC Turbos race truck has lots of one-off and prototype parts. Now that it’s done, we’re all really excited to get this engine out there and see what it will do.”

To start the 6.0L Powerstroke build, Kill Devil Diesel went with a factory Ford 6.0L block, which got the shop’s standard machining and race prep done to it.

“This engine can split the cylinder walls somewhere around 1,500-1,800 hp, so we’re working on improving some of that with a partially filled water jacket,” he says. “It has Power Bore ductile iron cylinder sleeves we had made for us that’ll also strengthen up the cylinder walls. The engine also has our own aluminum cylinder heads with our port work profile that we’ve developed over the years. The aluminum heads take 80 lbs. off the nose of the truck, which is a pretty considerable reduction.”

Another important partnership in the build of the 6.0L Powerstroke was with CP-Carrillo. Kill Devil Diesel worked with Carrillo on its hybrid rotating assembly.

“They’ve had that out for a couple of years now for the Duramax and Cummins market,” Alderson says. “We’re working with them to bring that hybrid kit, which uses a Top Fuel Hemi DLC wrist pin with a forged/anodized piston, to market for the Powerstroke crowd. You also run .200˝ longer connecting rods, which helps the rod to stroke ratio. The smaller wrist pin and the longer rod actually knocks almost half a pound per cylinder out of the rotating assembly. If you told the NASCAR guys you could knock those pounds out of the rotating assembly, they would foam at the mouth. The engine also got our cryo-treated crankshaft.

“I’m optimistic that with a longer rod and some of the geometry changes in terms of dwell time, piston speed and some of that, we should be able to light the chargers a little bit quicker, especially with the camshaft. We also used a torque converter that will help the truck leave the line, and in the power band, it’ll go from a 2,600 rpm stall to a 3,200 rpm stall.”

The valvetrain of the 6.0L Powerstroke is another critical, developmental aspect of this engine design, and Kill Devil Diesel pulled out all the stops.

“The engine has a solid roller kit, which allows the engine to make power higher up in the rpm band,” Alderson says. “That is one of our goals. It’s really hard on parts when you make 2,500 ft.-lbs. of torque at 2,100 rpm, so we detuned some of the torque and the cylinder pressure down low and raised those power levels up higher into the rpm range where you change the stress from the bottom end to the top end in the valvetrain.”

The engine comes with a Total Seal ring package that should work well with the ductile iron sleeves. It has Kill Devil Diesel’s o-ring design, which is a double o-ring – one in the block and one in the head. It has the shop’s cylinder head with CHE ductile iron valve seats, REV (Racing Engine Valves) Inconel valves, billet adjustable rocker arms, and pushrods from Trend Performance.

“The engine also has .937˝ solid roller lifters that we co-developed with Jesel,” he says. “The valvetrain set up features a camshaft profile we developed, and the design is not for street-friendly use. It should move the peak power band from 3,500 rpm to almost 5,000 rpm. It’s a big jump and it helps, especially with our port profile. With the cylinder heads, we’ve really found that helps the efficiency in the higher rpm range, where they get up around 3,600 rpm, and they plateau. We’ve been able to bring that power band up to keep climbing until around 5,000 rpm.

“This doesn’t constitute the majority of the engine builds that we do,” Alderson says. “But these are the ones that I really like because we can push the envelope of not just the Powerstroke stuff, but the diesel industry in general.”

All said and done, this four-wheel-drive KC Turbos race truck and its 6.0L Powerstroke should be capable of making 2,000 horsepower.

Advertisement
In this article:AMSOIL, diesel, Diesel of the Week, Powerstroke