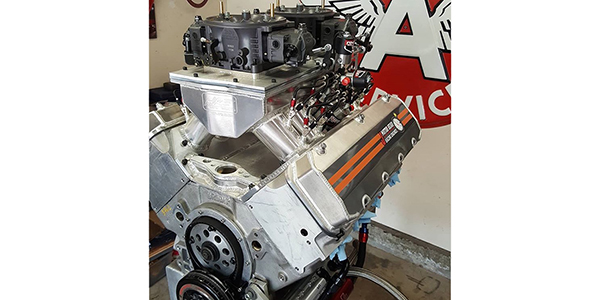 Having retired as an automotive technician a few years back, John Messmore needed something fun to occupy his time. His love for building big block Chevys led him to opening his one-man engine shop, J Motorhead Racing Engines, in San Diego where he builds big cubic inch, big blocks like this 632 cid Chevy nitrous engine for grudge racing. Find out what goes into building this 2,000 horsepower beast!

Growing up with a dad who built race cars and drag boats for fun, John Messmore took a liking to cars and engine work at a young age. His first car when he was 16 was a ‘69 Camaro, and after tinkering with that, there was no looking back.

“After I built enough of my own cars and engines, people wanted me to start building stuff for them,” Messmore says. “That’s how it all got going. I just learned engine building from doing it for the past 20 years or so. I’ve been building engines at J Motorhead Racing Engines for almost 5 years.”

Messmore builds 12 to 15 engines a year and gets all of his machine work done at Total Performance. Because J Motorhead Racing Engines specializes in one-off, custom builds, some engines can take quite a while, like this recent build of a 632 cid big block Chevy nitrous engine for grudge racing.

“I just finished a 632, which was a really cool build,” he says. “This engine build came to me from my buddy Duncan who owns Barona Drag Strip. He came to me wanting to do a big nitrous motor to compete with other guys at the track. I had already built him a 569 cid nitrous motor that he set the track record with. He wanted something bigger because there’s other guys coming out with competitive stuff.

“I’ve been wanting to do a 632 cid build with these Race Flow Development heads that are out on the market. They’re not that easy to get. Curtis Boggs is the guy who does them, and it takes months to get these heads, but they’re worth it. It’s worth the wait to have this guy make you a set of heads because he’s got custom CNC programs. Out of all the 14.5-degree style heads, his are the best flowing heads out there. This was always a build that I wanted to do if someone had the money to do it, and Duncan said let’s do it.”

In addition to the Race Flow Development 14.5-degree heads, the 632 uses an all-aluminum, Brodix ultra tall deck block with a 10.7˝ deck height. The block had a custom heat treatment and windowing done to it when it was ordered. It’s also got a .400˝ raised cam tunnel and a custom ground 60mm Bullet babbitt bearing camshaft in it, which Messmore admits doesn’t get done too often.

“The engine’s got an ultra-long 7.200˝ rod length – actually 7.196˝ – all-aluminum GRP custom rods,” he says. “We had Diamond make us a custom set of pistons for big power and big nitrous, which came with Total Seal piston rings. It’s got two Holley 1250 Ultra Black Dominators. The intake was made by HRE, which is a full custom, one-off intake.

“It’s got Inconel exhaust valves. The intake valves are 2.525˝ intake valve size. It’s also got a full T&D shaft-mount rocker system with Inconel exhaust rockers, which I haven’t seen a lot of. Manton made me a custom set of pushrods for it. The crank is a Crower Enduro crankshaft. It’s got a Jesel belt drive, PAC springs and retainers, Crower lifters, and Clevite H-series bearings.

“The engine has a Dailey Engineering 6-stage dry sump oiling system on it also and a lot of cool features that are going to work well with the combo. The engine also runs on nitrous and has two fogger kits from Induction Solutions.”

Just like any build of this caliber, there are inevitably road blocks and minor issues that come up during the build, which Messmore had to alleviate.

“There were clearance issues with the pushrods and the heads,” he says. “I had to dry assemble the engine a few times in order to get the clearances right as far as the pushrod to head clearance. I had to put a dummy spring on every single valve and then go through one at a time and just roll it through one at a time and mark areas in the head that I had to clearance for the pushrods. I used half-inch pushrods on the exhaust and 7/16ths pushrods on the intake with zero taper, so I had to get in there and massage the cylinder heads a bunch to get those to clear the way I wanted them to.

“I also had to massage the drain back oiling areas where I had scavenging for the dry sump in the back of the cylinder head. I opened that area up and made it to where the oil could flow through there quicker to get it out of the top end to get it back to the oil tank for the dry sump.”

This 632 big block Chevy has taken almost a year to build by due to all of the custom components.

“When everything is one-off, it takes time to get stuff done,” Messmore says. “The block itself had to go in the mill and get clearanced for the different rods that I went to. That stuff adds up.”

The customer, Duncan, is currently racing with Lizzy Musi’s old Pro Mod car, which has a J Motorhead Racing Engines-built 569 cid nitrous motor in it currently.

“With his old 569 cid motor, he ran 4.49 in the eighth mile,” Messmore says. “We’re going to pull that motor out and put the new 632 in. The new engine is capable of handling around an 800 horsepower shot of nitrous, and should make over 2,000 horsepower using both nitrous kits. The car should run in the low fours once it’s all dialed in.”

Here’s to hoping it sets a new track record!