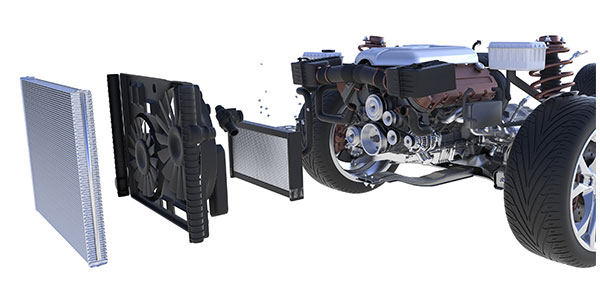 We all know the internal combustion engine (ICE) is going through a metamorphosis these days as the OEMs carefully scrutinize and squeeze every component for maximum efficiency.

We all know the internal combustion engine (ICE) is going through a metamorphosis these days as the OEMs carefully scrutinize and squeeze every component for maximum efficiency. Many engine components that were traditionally engine-driven are now considered power hogs, and in some instances, these parts are redesigned to improve their efficiency.

According to our sister publication, Underhood Service: “New cooling system technology will make engines run better and cleaner.” But also, these new technologies are being developed to not only reduce emissions, but will result in more power, too.

One of the last holdouts of engine-driven components is the water pump found in late-model applications. But this could be changing soon. As the water pump pulley rotates with each engine revolution, the internal impeller moves coolant through the passages and out to the radiator to cool. However, it is very inefficient as the constant pumping of coolant robs power. Today, some luxury vehicles and hybrids use more than one water pump. The secondary pump is typically electric to allow water to circulate if the engine is suddenly turned off (i.e., start-stop applications) or to cool other parts such as turbos or batteries in the case of hybrids.

Electric water pumps have been used for years in the racing and performance industry. But to use an electric pump that is computer-controlled to run at variable speeds, would be a benefit for passenger cars as well. Another advantage is that it could be remotely located, which could be useful in tight engine bays or where weight and mounting position are paramount.

A variable speed electric pump could also be configured to increase or reduce the speed of coolant circulation for different operating conditions (i.e. computer-controlled). If the current electrification trend holds, we think there will be a computer-controlled pump offered sometime soon.

Switching gears to performance and racing – some racers and hot rodders are converting to electric water pumps to free up horsepower. CVF Racing, Proform Parts and others, for example, offer an electric water pump for older engine applications such as SBC and SBF. CVF’s electric SBC pump is CNC machined from 6061 aluminum to reduce weight and save horsepower. The company says its pumps will free up 5 to 10 horsepower compared to a mechanical water pump. The pumps are also designed to work with the company’s accessory brackets for easier installation.

Proform offers an electric water pump for Ford 289-302 engines based on its popular Chevy versions. The Ford small block electric water pump features a 12-volt motor pumping up to 35+ gallons of water per minute. Each pump is made from die-cast aluminum with epoxy powder coating for corrosion resistance. The kit includes a billet aluminum backing plate, mating weather-tight connector and two aluminum inlet fittings. The pump is 6˝ high from mounting surface to top of the motor.

While keeping the cylinder head cool helps prevent detonation at high engine torque, keeping the cylinder head hot is just as important for increasing fuel economy at low engine torque. Some manufacturers have tried redirecting coolant from the lower radiator directly to the cylinder head to improve temperature control, which is a big concern for the OEMs as they develop the next generation of engines. Chemicals used today have also changed from the “green stuff” that has been a mainstay for decades. The chemical compounds must interact with multiple types of metal and not allow corrosion to set in. Racers who are required to run straight water should consider running an additive that prevents corrosion. Many of these additives improve cooling by allowing the water to contact more surface area inside the cooling system.

Today, most radiators use aluminum cores with plastic headers to save cost and weight. Aluminum-plastic style radiators are more prone to failure and can’t be repaired as easily as copper-brass, but it is a more thermally efficient heat exchanger.

In most performance and racing applications, aluminum is the most desirable material for radiators. Although it’s not as thermally efficient as copper, it is more efficient than brass, which when combined with copper, makes the overall thermal conductivity less than all-aluminum.

Keep in mind that the cooling system is only as good as the surface area you have available for air to flow through the radiator fins. Some race cars and more exotic production vehicles can run multiple radiators, depending on how much frontal area is available. IndyCars, for instance, mount a radiator in each side pod because the nose of the car holds the wing and is used as an aerodynamic device. Many hot rodders have also switched to aluminum for better efficiency in a smaller package, and besides, it just looks cool.

The Slimfit is 40-percent thinner than the average radiator, fan and shroud assembly. The way Proform achieved such drastic results was by flipping the fan and fan motor around. The fan motor is mounted inside of the radiator instead of outside and brazed in. Furthermore, the design doesn’t compromise the radiator’s cooling capabilities, according to the company.

Performance radiator companies such as C&R Racing say the key to a good radiator core is in the tube itself. Chris Paulsen, the founder of C&R, said at the Advanced Engineering Technology Conference (AETC) a few years ago that in the past, radiators used rows of half-inch tubes. But new technology has enabled C&R to make tubes much wider, allowing more surface contact and heat rejection.

Developments in extrusion, according to Paulsen, allow thicker metal on the leading edge of the tube to ward off debris, compared to rolled and welded tubes that start as flat sheets of aluminum. Extruded tubes are much stronger and can handle high pressures. Paulsen noted that even more technology goes into making the louvers on the fins between the tubes. He also pointed out that high flow rates keep the hot spots down and increase heat rejection.

A crucial deciding factor in fan selection is the amount of airflow needed. Is the vehicle for racing (high-performance application) or is it a weekend cruiser? Companies such as Maradyne recommend matching the CFM (cubic feet per minute) of the fan to the performance level of the vehicle.

There’s not as much heat generated in a mild performance application; therefore, you don’t need as much CFM to keep it cool. Higher performance engines require more CFM, depending on the application. While no one ever complains about too much CFM and running too cool, people certainly complain about not being cool enough. According to the folks at Maradyne, the goal is to choose the correct fan to match the application; and remember, too much CFM is better than not enough.

Before you go the electric fan route,  make sure the charging system, battery and alternator can handle the amp draw. Most 12˝ to 16˝ fans draw about 15 to 19 amps. Some dual fan setups can draw as much as 22 to 35 amps. Next, you or your customer will need to choose the type of fan, which will depend on how much space you have.

For most installations, a “puller” fan should be used, which is mounted on the backside of the radiator in the engine compartment to pull cool air through the radiator. It is recommended to set the fan up in a puller configuration, so you don’t obstruct the incoming air to the radiator from the grill opening. Using a “pusher” fan would be used on the front side of the radiator between the grill and radiator. Some manufacturers offer fans that are reversible and can push or pull, depending on your preference. If you use a shroud around the fan, it will improve cooling because it creates more focused airflow. But some fans can be set up as unshrouded, but they are not as efficient.

Engine coolant flows through the cylinder head through passages cast into the block and holes stamped into the head gasket. Moving an even flow of coolant through the block, head and around hot exhaust ports is the primary goal of any cooling system. An uneven flow will cause hot spots and lead to failures.

Engines should operate near the boiling point of water to ensure that it evaporates from the engine oil during regular operation. Without high coolant temperature, oil can turn into black sludge and clog oil passages and corrode internal parts. Today, wax pellet-controlled thermostats are the standard for mechanically managing coolant flow and temperature.

During engine warm-up, the thermostat blocks the flow of coolant that can create different thermal expansion rates between cast-iron (blocks) and aluminum (heads). The difference of heat transfer will eventually cause cylinder heads to warp and the head gasket to fail. The coolant bypass circuit allows the water pump to warm the engine assembly evenly by circulating coolant through the engine block and cylinder head while the thermostat is closed. Most bypass circuits circulate coolant directly from the pressure outlet of the water pump to the base of the thermostat, which ensures an accurate thermostat opening temperature.

No matter what cooling system you put in place, just make sure it’s doing the proper cooling for your application.

Keeping an Eye on Cooling Systems

Diesel Injector Update
Connect with us