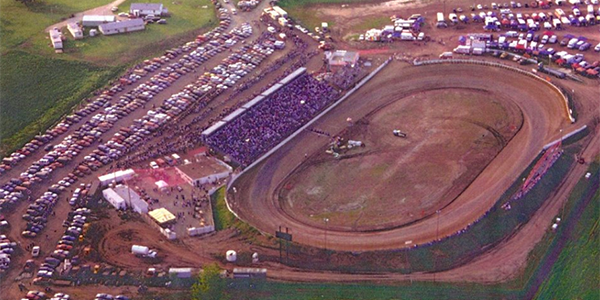 LaSalle Speedway, located in LaSalle, Illinois, is for sale at $2.0 million. The near 56-acre facility is located 90 miles west of Chicago and 80 miles east of Davenport, Iowa.

LaSalle Speedway, located in LaSalle, Illinois, is for sale at $2.0 million. The near 56-acre facility is located 90 miles west of Chicago and 80 miles east of Davenport, Iowa. It is conveniently located just south of the I-80 and I-39 interchange.

The speedway features a 1/4 mile dirt oval. The famed dirt track has attracted top-level racers from across the country, including NASCAR stars Kasey Kahne, Ken Schrader, Kenny Wallace and Tony Stewart. It also has fielded many a dirt track star such as Billy Moyer and Scott Bloomquest. Sprint car pilots have included Steve Kinser and Sammy Swindell. It has a storied history.

In 1947, LaSalle Speedway was founded as the Tri-City Speedway. It closed after only six races. For two years after that, a cow milking facility operated in its location. Starting in 1951, a drive-in theater operated on the property. The Glynn family operated it in the mid 1980’s, closing again after several seasons.

In December of 1991, Kerry and Tony Izzo Sr. bought the land with plans to bring racing back to the site. LaSalle Speedway was rebuilt by the Izzo family and opened its doors in the summer of 1992. In 2000, Kerry Izzo took over sole ownership. Tony Jr., Kerrianne and Joe took over operations, each working in a variety of capacities. Throughout their ownership, Kerry, along with her family, watched the Speedway flourish, providing some of the greatest short track racing in the country. They continually added improvements and upgrades, including Musco lighting in the infield.

The facility has nine air conditioned skybox suites that each hold up to 15 people. The front main grandstand seats 3500, along with a set of bleachers that hold an additional 700 people. The back straightaway has seating to accommodate 500.

Popular events at the track include the Thaw Brawl to kick off each year, Lucas Oil Dirt Late Model events, the UMP Summer Nationals, the IMCA One Night Stand, the Bill Waite Jr. Memorial IRA Sprint Car Special, the World of Outlaw Sprint Cars, and the ARCA Truck series. Races at the track have been featured many times on Dirt on Dirt broadcasting, as well as various Chicago and Davenport stations.

The facility has also served as a temporary music venue and has hosted many big names including Toby Keith, Sawyer Brown and Trick Pony. Additionally, the Speedway has hosted Monster Truck events, Circuses (including the Shriners Circus), Flea Markets, and Car Shows. The possibilities are endless.

The city of LaSalle and its officials have been long term supporters of the Speedway since its very beginning and have promised to continue their support. The turn key facility comes ready to operate and the property includes four homes ready for living or renting.

With her children going different directions in their lives it is with a heavy heart and a seventieth birthday that Kerry has chosen retire and sell the historic property.

Advertisement
In this article:race track, racing

LaSalle Speedway for Sale in Illinois

Jason Smith, Family Owner of Speedway Motors, Passes Away at Age 60
Connect with us