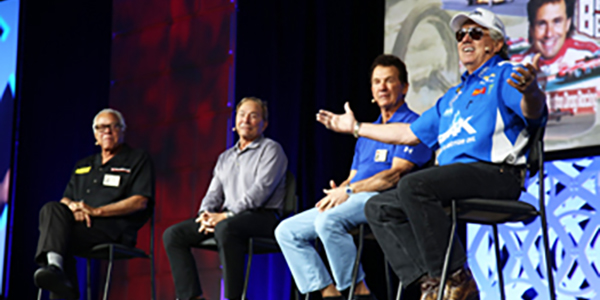 To kick off the 50th anniversary of Pro Stock, the 2019 NHRA Breakfast will bring the superstars of this highly competitive category together to discuss “50 Years of Pro Stock.”

One of the most popular and longest-running events at the SEMA Show in Las Vegas, the NHRA Breakfast is often referred to as a “can’t-miss” event, and this year will be no exception. To kick off the 50th anniversary of Pro Stock, the 2019 NHRA Breakfast will bring the superstars of this highly competitive category together to discuss “50 Years of Pro Stock.”

The NHRA Breakfast will feature drag-racing legends and current fan favorites, including Herb McCandless, Warren Johnson, Greg Anderson, Erica Enders and Jeg Coughlin Jr. For the second year, FOX broadcast announcer Brian Lohnes will serve as the panel moderator, asking probing questions to provide attendees with a revealing glimpse into a category that bases some of its appeal on secrecy. Attendees will hear some of the best-kept stories that helped to drive the Pro Stock category throughout the years.

“The NHRA Breakfast at SEMA is always a must-attend event,” said Lohnes. “But now that we’re going to peel the curtain back on the most secretive class in NHRA history.”

The NHRA Breakfast at the SEMA Show will be held Wednesday, November 6, from 7:30 a.m.–9:00 a.m., at the Westgate Las Vegas Resort & Casino Paradise Events Center. The annual NHRA Breakfast is part of the 2019 SEMA Show, held November 5–8, at the Las Vegas Convention Center. Following the breakfast on Wednesday, NHRA will host an autograph session featuring all five drivers on the panel at the NHRA Booth (#10000) from 10:00 a.m.–11:00 a.m.

The NHRA Breakfast is open to all registered SEMA Show attendees at no cost—however, tickets are required. A continental breakfast will be served. To order your event ticket or register for the show, visit www.SEMAShow.com/register and click “Add Event Tickets.”

Herb McCandless: McCandless became the first Pro Stock driver to win at the prestigious U.S. Nationals when he nabbed the Wally in 1970 driving a ’70 Plymouth Duster for the famed team of Sox and Martin. After retiring, he became a well-respected engine builder. Still very much a part of drag racing, he returns to the U.S. Nationals each year to announce color commentary the HEMI Challenge event.

Greg Anderson: A four-time Pro Stock world champion, Anderson sits just four wins shy of tying “The Professor” for the second winningest professional NHRA driver in history. With a desire for perfection that borders on obsession, he began his career as an engine guy before stepping into the driver’s seat for the first time in 1998.

Erica Enders: This two-time NHRA Pro Stock world champion (the first and only female to ever hold this title) is known for her razor-sharp reaction time and her prowess handling the complexities of one of NHRA’s most competitive categories. Enders currently holds the National Pro Stock record for speed and is currently the third winningest female in the history of drag racing.

Jeg Coughlin Jr.: With a successful career in both the professional and sportsman ranks, five-time Pro Stock world champion Coughlin comes from a long line of racing enthusiasts. He is the first and only driver to race to victories in seven NHRA categories—Pro Stock, Comp, Super Stock, Stock, Super Comp, Top Dragster and Super Gas (in which he’s also won a world championship).