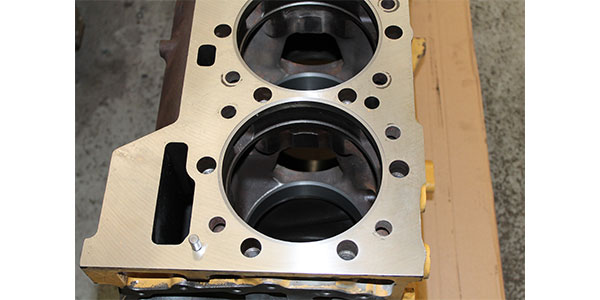 What do cylinder sleeves and a certain rodentary rock band from the ‘80s have in common? You guessed it, the shape. But we’re going to leave the rockin’ to the hair guys and the talkin’ to the car guys, so for the sake of this article, we’ll just be covering the first one.

What do cylinder sleeves and a certain rodentary rock band from the ‘80s have in common? You guessed it, the shape. But we’re going to leave the rockin’ to the hair guys and the talkin’ to the car guys, so for the sake of this article, we’ll just be covering the first one.

Making the “rounds” for this article, my first stop was R&R Machine, a full-service machine shop in Akron, OH. First opened in 1966 as R&R Tool and Machine and originally a 2,000 sq.-ft. facility, they have grown to 30,000 sq. ft. with 16 drive-in service bays. An Engine Builder of the Year award winner and an authorized OEM engine dealer for 19 different manufacturers, R&R is no stranger to the industry and is an active member of many associations to promote and support it.

Sleeves and liners are part of their daily routine and there are no exceptions to what they can do. “If it’s round, we’ll work on it,” says owner Bryan Menke. Heading back in the shop, Menke introduced me to Tommy Tonkovich, a 40-year veteran of the industry with 20 years at R&R. Tonkovich does the majority of their sleeve and liner work.

Tonkovich explained that he doesn’t think of sleeving as repairing a cylinder or a bore, rather fixing a hole. “If it’s round, we’re going to fix it,” Tonkovich says, echoing Menke’s earlier comment. Over his 40 years in the business, Tonkovich said although newer machines make it possible to do things a little quicker, the basic process has always been the same.

R&R installs sleeves in anything from the smallest motorcycle or car bore to the largest industrial engines they can fit in their shop. “Whether it’s an MG, a Ford Coyote block or a sprint car block, they’re all the same,” Tonkovich says. “It’s a hole and it has to be a certain size.” An old steam engine and axle housings are among the list of oddities that Tonkovich has repaired, all with the same thing in common, they are just a round hole.

“The biggest challenge can be holding the item,” Tonkovich says. “If I can get it on the machine and get it squared up, I can fix it.” Although there are some applications that use a specific sleeve, the majority of their stock is cataloged by size, with the sleeves looking like nothing more than a piece of pipe. “There are so many different sizes, every repair is different,” Tonkovich says. “I machine each sleeve the size I need it to be.”

The Ford Coyote block is a common job to come through the doors. Tonkovich explained that these blocks have thin-wall integrated liners from the factory, and you cannot over-bore them. In order to repair them or handle the high horsepower demands of racing, thicker walled sleeves must be installed.

When pressing sleeves into place, Tonkovich prefers to heat the entire block and dry-ice the sleeves. This makes installation considerably easier and it also prevents tearing of the metal, especially on aluminum blocks.

Many of the truck and industrial engines that are repaired at R&R Machine have wet liners, which have a sealing o-ring at the bottom. If the lower bore is worn, the o-ring will not seal properly and Tonkovich cuts out the lower bore, installs a sleeve, then bores it to the proper size so the new cylinder sleeve will seal at the bottom.

Tonkovich also pointed out that some of the new high-grade sleeves and treatments have made them much harder to hone, and you need to have a diamond-head hone to properly and successfully complete the installation.

Down to a science could be one way to describe sleeving at R&R, and they’re taking full advantage of the opportunities.

Those sleeving opportunities are also being offered by Darton Sleeves, where I spoke with John Catapang about the process and their latest technology. “It’s essentially a piece of pipe we’re turning into something to go into a stock engine block, which can’t handle and wasn’t designed for, higher horsepower applications,” Catapang says. “For instance, Coyote blocks make 400-500 horsepower, but you’ve got street guys who want 1,200 horsepower. Stock blocks aren’t designed to do that.”

Discussing the technology that goes into a sleeve, once again the subject of shape came up. “There’s only so many ways to make a round hole and machine the block in order to fit these things in,” Catapang says. “So what it comes down to is material.

There are different grades of ductile iron that are offered by Darton Sleeves, with their highest-grade material called DDI 2017, which is essentially designed for Top Fuel Funny Cars. “We have our standard material, which is good for pretty much all the street guys and a lot of OEM applications, then we have our high-grade material for those guys who want to make 12,000 horsepower. That’s used pretty much by 98% of the Top Fuel and Funny Car teams out there,” he says.

The metallurgy is what makes the key ingredients come together in Darton’s sleeves. Catapang explained that the materials are made to be stronger, yet remain ductile so they do not crack. They need the ability to flex a little bit as the block flexes. The key is to make them as strong as possible with a higher tensile strength, but yet still have ductility to keep them from being so hard they become brittle. In addition, the metallurgy is changed so it also works well with rings, without having to use any coatings.

“We make sure that the matrix of the material is designed to work well with any piston rings that are used,” Catapang says.

Higher grade materials also have an advantage in longevity. Standard cast iron has approximately a 30,000 psi tensile strength and Darton sleeves start at a tensile strength of 100,000 psi, with the advantage being improved cylinder wear characteristics.

Darton manufactures sleeves for blocks that don’t originally come with them, such as cast iron blocks, and these are generally just a variety of sizes for the machine shop to size as required, but they also have off-the-shelf applications for engines such as the LS2, LS7, Coyotes, Voodoos, Honda, Toyota, Nissan, and other engines that are being modified in a higher-quantity.

One of the unique offerings from Darton Sleeves is its MID or Modular Integrated Deck kit, which converts standard blocks into wet sleeve blocks. If a block cannot convert to wet sleeves, Darton offers a “Seal Tight Sleeve,” which is a dry sleeve that allows you to go with a bigger bore size.Honda’s are some of the biggest sellers for the Darton MID sleeves. As an example, installing the MID sleeves in a standard B18 1.8L block will convert it from an open deck configuration to a closed deck and allow a bigger bore size. The B18 starts at an 81-millimeter bore, and this allows an 84-millimeter piston, bumping the displacement to 2.0L and adding enough strength to push 50 or 60 lbs. of boost. “We have a Honda that we run in the Sport Front-Wheel Drive class and it’s a 2.0L motor making 1,200 horsepower,” Catapang says.

“The block that we use is an aluminum Gen IV block, new from GM. We’ll cut out the factory sleeve and then we’ll install aftermarket Darton sleeves in-house. We’re taking an existing block and making it better. We use very strict tolerances and a specific amount of crush to put those sleeves in place,” Doelling says. “Re-sleeved engines like this are just so versatile – they can be used for off-road applications or for drag applications. The platform is super versatile and that’s what’s so great about that engine and why it’s so popular is you don’t have to spend quite as much money as you would going to an aftermarket six-bolt block. Because of the sleeving process, you have so much less cylinder wall distortion because the material is much harder and the cylinder walls are much thicker. Combine that with gasket technology and it allows you to push a lot harder as far as doing mean stuff with boost. You’ll have guys run 28-30 lbs. of boost on these engines as a four-bolt block and able to hold the head on it. The re-sleeved block is super versatile because it can do just about everything that anyone is wanting to do to it.”

Also no stranger to sleeves and liners is Melling, which offers a number of common sleeves and can custom make whatever you need. Generally speaking, there have been no drastic changes in manufacturing technology or installation over recent years, but one of the more common sleeves for Melling is for GM’s LS engines, and the popularity of aluminum blocks is steadily increasing.

“With aluminum blocks, you’ve got three different ways you can get them,” says Dan McDonnel, GM of Melling’s cylinder sleeve plant in Maquoketa. “There’s the nickel field where they spray the coating on, the OEM’s who will cast the sleeve in the block when they make it and the OEM’s who machine the block then slide the sleeve in. You can just use the standard sleeve with a flange to fix any of them.

As the popularity of aluminum blocks increases, the opportunity for machine shops to capitalize on sleeving rises right alongside, and the industrial equipment market as well as the restoration of old cars and motorcycles is right there as well. If you can fix a hole, you can make money – it’s the perfect opportunity for all a-‘round’ profit.

Advertisement
In this article:Eric Garbe, Sleeve and Liners

Circling the Potential of Cylinder Sleeves and Liners