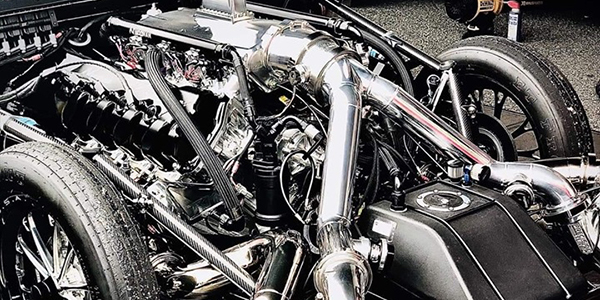 Looking to build a new race car to break records in 1/8th-mile drag racing, TKM Performance built this 4.900˝ Outlaw Hemi engine for a C7 Corvette. Find out how this engine makes well over 3,000 hp!

What does every racer have in common? They want to be the fastest there is, of course! Kevin Mullins and Jarrod Wood are no different. The two racers are out at the drag strip most weeks seeking faster ETs than the time before. Now, the two are teaming up to break records in Radial vs. The World.

Kevin Mullins, owner of TKM Performance in Denton, NC, was the original owner of a record setting Radial vs. The World Mustang, which Jarrod bought off of him, and a friendship was born.

“Kevin had the record four of five years ago with a 4.11 [1/8th-mile pass] in the Mustang,” Wood says. “I purchased that car two and a half years ago and raced it in Australia to the first 3-second pass (1/8th-mile) in Australia with Kevin’s help. I sold it this year to one of my mates and now we’re doing a C7 Corvette with a 4.900˝ TKM Outlaw Hemi.”

That new Hemi engine was built at TKM Performance, which was founded four years ago by Kevin Mullins, who went from racing and tuning his own cars to having a successful business building race engines.

“They do everything, but the shop specializes in turbo stuff with radial tires,” says Wood, who is one of the shop’s good customers. “TKM Performance builds a lot of Coyote, Hemi and LS engines. They’ve built quite a few billet Noonans lately. The shop has eight full-time employees who are focused on drag racing applications and do everything in-house from start to finish.”

For the C7 Corvette build, Kevin and Jarrod went with a 4.900˝ TKM Outlaw Hemi engine. The only goal was to break records.

“The goal was to try and be the fastest on a radial tire,” he says. “We want to set the world record. It’s got a Larry Jeffers chassis, a Mark Micke trans two-speed turbo 400, a Strange Engineering billet third member, and then the 4.9 TKM Outlaw Hemi, which features a Noonan block and heads, a billet intake with two Precision 98mm XPR turbos. It’s all controlled by Fuel Tech.”

The engine is a tall deck engine with a 4.900˝ bore space and a short stroke.

“The engine also has a Bullet camshaft, a Winberg crankshaft, Wiseco pistons with Total Seal rings, GRP connecting rods, titanium Manley valves and springs, and billet Atomizer injectors, which supply the VP M1 methanol fuel. The engine runs T&D rockers up top and Manton pushrods. We had a flexplate and titanium bell housing made for the car, which mates up to a Mark Micke turbo 400 two-speed with an M&M shifter, and a Precision carbon drive shaft.”

To supply oil, the Hemi runs a Barnes wet sump oiling system and has RCD Engineering timing components. It has short runners on the intake manifold. It’s probably around 520 cid and the compression ratio is 10.2:1.”

Jarrod and the folks at TKM literally just finished the car and had only done a base tune on the engine when we spoke with them at the end of October.

While no official runs have been made in the C7 as of yet, the TKM Outlaw Hemi pushed the Corvette down the track in 3.94 @ 170 mph during testing, which Wood says will run into January so they’re ready for racing next year!