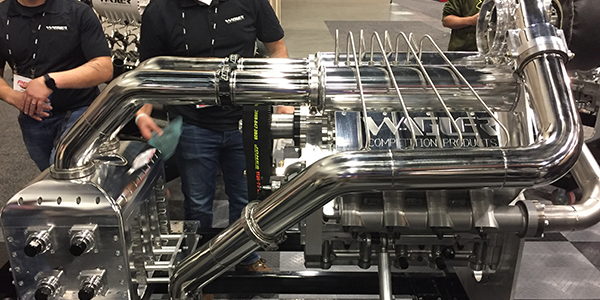 There’s not much Wagler Competition Products isn’t capable of doing at its Odon, IN-based diesel engine shop. Evidence of all those capabilities can be seen in this mechanical injected and turbocharged DX 460 cid Duramax built for Pro Pulling Leagues. Find out what went into making this a more than 4,000 horsepower Duramax monster!

When Jeremy Wagler finished high school, he didn’t head off to college or take a year to backpack across Europe. Instead, he took his talents in the diesel/automotive industry and turned them into an immediate career.

At just 19 years old, Wagler opened an automotive repair shop, which he ran for 10 years before he started to buy up CNC equipment to begin developing engine parts. It wasn’t long before he developed an aftermarket Duramax cylinder head, and Wagler Competition Products was born.

WCP also does Cummins work and makes parts like billet cylinder heads, cams and roller rockers. A few years ago, Wagler also bought out R&R Connecting Rods in Illinois in order to start making his own connecting rods for diesel applications and aluminum rods for the DX Duramax engines. That company is now called Wagler Connecting Rods.

What also separates Wagler from others is what his shop is capable of doing in-house, which is pretty much everything.

“Everything is done in-house from the block, cylinder heads and connecting rods, to the oil pan and the intercooler,” he says. “We build our own rocker assemblies for these too, so the rocker arms are designed and built in-house. Basically most of the engine from head to toe gets brought in on pallets of aluminum and machined into a complete engine.”

We caught up with Jeremy at the 2019 PRI Show to talk about his latest creation of a 460 cid DX Duramax built for the Lucas Oil Pro Pulling League. The engine was on display in the Wagler Competition booth this year at PRI.

“This is a DX 460, so it’s a 460 cid Duramax-based, all-billet monobloc,” Wagler says. “The monobloc has separate jugs, separate main sections of the block and it has a full bedplate for all the main caps. The center line of the crank and the center line of the cam has to be the same as what Duramax came out with from the factory. The main journals have to be the same exact spacing as what GM came out with.”

Wagler has been making 3,000 horsepower on a common rail set up, but with this engine, which is mechanical injected, Wagler wants to strive for 4,400-4,500 horsepower.

“Similar to Pro Stock tractors, we want to take their pump and their turbo from Wimer Fuel Systems – they build big 6˝ turbos and a billet Sigma-style pump – we want to see if we can get up to that 4,000 horsepower,” Wagler says. “That’s why we did this system.”

All the engine work for this build was machined and done in-house at the Wagler shop, as was the design work.

“We did custom manifolds, which are ductal iron, solid bars that we gun drill and then port the ports in them and then flange with a V clamp inside,” he says. “This engine has taken all the stuff we’ve learned over the last couple of years and put it into use.”

This engine is going in a Super Stock truck, which will compete in the Lucas Oil Pro Pulling League, and Wagler is looking for over 4,000 horsepower!

“That’s our goal,” he says. “We know [Pro Stock tractors are] making over 4,400 horsepower right now with the same fuel and the same air, so we’re putting it into our package. Anything over 3,000 horsepower we’re in the plus.”

For the valvetrain, Wagler used all custom rockers and Manton provided the pushrods. The build also uses a Peterson five stage oil pump.

“We’ve been running these DX 460 engines for three or four years and now we’re really getting great results out of these,” Wagler says.

And he’s not lying. With all of Wagler’s goodies, this engine also won JE Pistons’ Masters of Motors competition at this year’s PRI Show.

Advertisement
In this article:AMSOIL, Diesel of the Week, Wagler Competition Products