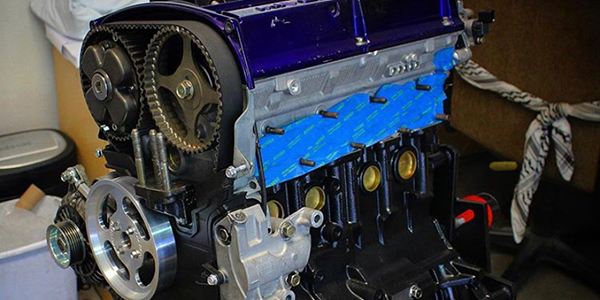 For those of you familiar with Engine Builder’s print magazine, you’ve likely heard the name Aaron Yaghoubian or of his shop, Arlington Machine in Riverside, CA. Aaron has been a good friend of ours over the past few years and has contributed to our magazine as a technical resource. He bought Arlington Machine five years ago, when the previous owner passed away, leaving the shop and its contents up for sale.

Aaron saved Arlington from vanishing forever and has put countless amounts of hard work into the shop, as well as dedication to promoting the shop on social media, which has turned his business into an extremely busy one. Arlington Machine focuses on domestic engines, LS work and Mitsubishi Evo engines.

In fact, one of his customers named Robert, recently came to him to build a 4G63 2.0L Evo 9 engine, and Aaron happily got to work.

Robert bought his Evo in stock form about two or three years ago and has been racing and upgrading the car and engine set up ever since.

“I bought it with a stock motor that made about 500 horsepower and it had a 6-speed transmission,” Robert says. “I started racing it and broke the clutch about a week in. I put in a Haltech ECU and had Armen Tuned tune the car and it made 648 horsepower from the stock motor. The fastest pass I went on that was 10.1 at 138 mph.

“I ended up blowing that motor up, so I had another shop build me a motor, but that one only lasted me 666 miles before it got rod knock. We pulled that motor and I had Armen Tuned take a look through it and it made 750 horsepower. I had that engine in the car for about a week or two and then I got an offer for someone to buy it, so I sold it and I built another 2.0L and upgraded to an FP Zero turbo, and the car went 9.7 at 150 mph.

“The car at that point was a street car and I put about 20,000 miles on that motor. Also, the head had been resurfaced so many times I started torching the head, so I got rid of that motor and that’s when I went to Arlington and we did this crazy build. I’ve gone through so many set ups with this car, it’s crazy.”

Robert came to Arlington Machine with a goal of running 8 second 1/4-mile passes. Aaron knew just what to do to get the 4G63 2.0L Evo 9 engine ready to meet those goals.

“We do a lot of different, little details a lot of shops do not do,” Yaghoubian says. “We’ll bake the block, blast the block, mag the block for cracks, and fully deburr the block. In the front of the block on a 4G63, there’s two oil ports and it’s very rough because the block is a cast block. We go in there and carbide it, we cartridge roll it and smooth everything out so the oil can flow a lot better. Then, in the transition from that port to the actual oil galleys, we put radiuses on them so the oil flow will be better.

“I’ll also take apart all the new oil pumps, clean them, inspect them, deburr them, put them back together and prime them. On this engine, I cut o-ring grooves on the block and I installed stainless steel o-ring wires on it.”

According to Aaron, Evo engines have become one of his more popular engine platforms. In fact, he even designed a CNC port program for the Evo cylinder heads. This particular build started with a cement filled block.

“I 3/4-filled the block with cement, o-ringed it and did some other little tricks,” he says. “I CNC’d the head. We went with BME aluminum rods and BME full-skirted pistons. We’re running a Callies billet crankshaft, King bearings and ARP main and head studs.

“The camshaft is a GSC S3 cam with 280 duration,” Yaghoubian says. “It’s one of their newest billet-designed cams. These 280s make more power than those bigger 288-290 cams. A lot of people don’t realize the core makes a difference on the camshaft.”

The Evo 9 also got a Kiggly race-only spring kit suitable for drag racing. “We plan on pushing the motor with 65-70 lbs. of boost,” he says. “We ended up putting a spring kit that at the seat it’s around 135 lbs., and then we did a tool steel retainer because of the abuse hitting off the rev limiter – I’d rather see a tool steel retainer over titanium. Titaniums are nice to save a little weight, but when you have a lot of power like that, it’s okay adding a little bit extra weight to it for a more durable part.”

The engine features a Kiggly race regulator, which goes on the cylinder head and regulates the oil that goes to the top and the bottom end.

Aside from a number of aftermarket components, the Evo 9 build also kept a few stock Evo parts, such as the oil pump, which Arlington made some tweaks to, and the timing belt, which comes with Kevlar from the factory.

“A lot of lot of factory parts on the Evo 9 hold up to the power,” Yaghoubian says.

To really ensure this newest Evo 9 engine reaches its goals in horsepower and speed, Arlington went with a 72/75 Gen II Precision turbo and Sheepey turbo kit.

“The car is a full race car now,” Robert says. “I kept going to the track and I would do one pass and get kicked out because I didn’t have the right safety set up for the car itself. I ended up having to put in a roll cage and parachute and everything I needed to run without getting kicked out. Now that the car was running low 9 second passes and going 150+ mph, I also got my NHRA license.”

After Arlington Machine was done with its work on the 4G63 2.0L Evo 9, Robert added a JMF billet manifold, eight 1600cc injectors, a new intercooler pipe, which has no blow off valve to get rid of any boost leaks, and an AEM Infinity for better injection control for the ECU.

According to Robert, once the boost is cranked to around 65 lbs., this Evo 9 should be making 1,100+ horsepower!

Robert says, “Arlington did some top notch stuff.” And we would have to agree.

If you have an engine you would like to highlight in this series, please email Engine Builder magazine’s managing editor, Greg Jones at [email protected].