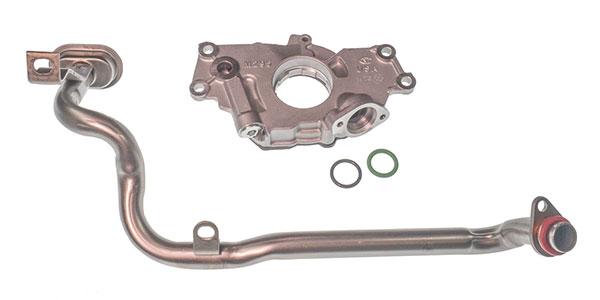 “The cornerstone of any lubrication system is the engine’s demand for oil,” says Mike Osterhaus, VP Aftermarket Products, Melling Engine Parts. He explains that the engine’s highest specific rate of demand (gallons per engine revolution) is at hot idle.

When oil doesn’t flow into vital engine components, the results can be catastrophic. Engines use a closed-loop lubrication system consisting of the oil sump, inlet circuit, oil pump, pressure relief valve, oil filter, oil galleys and drain back. Oil starvation is typically a failure of the oil drain back or oil management within the engine, according to experts we spoke with for this article.

Oiling issues on late-model engines are relatively rare these days, according to Osterhaus, but oil pump priming can be a problem due to the location of the pump. “We rarely hear of issues with late-model engines. We believe that this is due to blocks and heads designed to improve the return of oil back to the sump. Dedicated oil passageways from the cylinder heads back to the sump and windage trays that cover the entire sump are typical in late-model engines. The flip side is that attention must be given to older engines to improve the oil drain back to assure that oil starvation will not occur.”

Not all late-model engines are in the clear as far as oiling problems, however, as some are more prone to oil starvation than others. “A couple of late-model applications that come to mind are the GM LS7 and the Ford modular V8s,” says Osterhaus. “The original LS7 oil pan design allowed the end of the pickup tube to be exposed during high-speed cornering, causing oil starvation. Aftermarket oil pans have corrected the issue.”

Osterhaus adds that Ford modular V8 oil pumps have a thin aluminum cover plate on the backside of the oil pump, which is prone to leakage. “It allows a portion of the high-pressure oil to be discharged towards the timing cover. It has caused starvation issues as the leaked oil is kept suspended by the two overhead camshaft timing chains. Melling’s replacement and performance Ford modular oil pumps have cast iron cover plates that eliminate this issue.”

While oil starvation may not be an issue with newer engines, oil pump priming can be more of a problem as the pickup tube lengths have increased as well as the location of the oil pump has changed. The oil pump is no longer sitting in the oil during cold starts. Due to the design, Osterhaus says Melling improved its late-model pump priming characteristics. But he cautions that installers still need to be sure to properly prime the oil pump and the engine when starting it for the first time. He says that improper modifications to the oil pickup can result in aeration and cavitation.

Verne Schumann, president of Schumann’s Sales & Service, says that with the LS engine, you’ve got a couple of problems built into it from the manufacturer. “It may be better streamlined for gas mileage attributes, but as far as the functionality of the oil pump, he says it ends up being detrimental to the cause.”

According to Schumann, GM wants the hood to be as low as possible, and they want the pan to be as flat as possible, as they try and streamline for gas mileage. “The engine ends up having to use a very long pickup tube, and then you have the oil pump mounted as high up in the engine as possible up by the camshaft. One thing oil pumps don’t like is to suck for very long, and they don’t like to do vertical lifts. So, what does GM do? They put the oil pump way up high,” Schumann laughs.

Schumann uses the anecdote of an LS owner who perhaps goes on vacation for the summer: “When he comes home and hops in his new Camaro and cranks it up, the pump won’t prime. It happens because the residual oil has dripped off and it is sucking air. The factory LS oil pump doesn’t have an adequate seal between the pump and the block. We machine ours with an o-ring.”

One thing to keep in mind is that the oil pump does not actually suck the oil from the sump. Osterhaus notes that the pump creates a partial vacuum within itself, and the ambient pressure in the crankcase pushes the oil through the pickup tube and into the pump. “The temperature affects this as cold oil has more resistance to flow, which will increase the time for the oil pump to prime on cold days.”

Due to air in the oil, which is estimated to be 7% to 8% air by volume, according to Osterhaus, when the inlet pressure in the pump drops, the air escapes, causing it to foam. “If the pickup tube is moderately restricted, the oil can become aerated in the inlet circuit. This will reduce the pump’s volumetric efficiency. Aerated oil has reduced film strength, lubricity and heat transfer capability, and the oil becomes compressible. This can cause accelerated wear and erratic lifter, timing tensioner and camshaft phaser operation (hydraulic components). The next step beyond aeration is cavitation.”

Cavitation occurs when the pickup tube is severely restricted, Osterhaus adds. “The result is oil will be subjected to inlet pressure low enough to cause vapor bubbles to form in the oil on the inlet side of the pump. The vapor bubbles do not allow the pump to fill correctly. The vapor bubbles are then transported over to the discharge port, where the high pressure in the port causes the bubbles to implode. When this occurs, there is an enormous amount of energy released. The energy will generate noise and has the potential to cause pitting and surface erosion inside the oil pump.

The pressure relief valve functions to regulate the oil pump output, but it also has a crucial role in postponing the onset of cavitation, according to Osterhaus. “Aeration and cavitation are also related to high-speed operation as well. These will occur in any pump as the speed increases to the point where the oil can no longer fill the internal pumping chambers. As noted earlier, if the inlet pressure drops below the vapor point, then cavitation will occur as oil vapor bubbles will form in the oil.”

But the pressure relief valve comes to the rescue as it is designed to redirect some of the output flow back into the inlet port of the oil pump. “The bypassed high-pressure oil increases the local inlet pressure to push back the onset of aeration and cavitation,” says Osterhaus. “It supercharges the inlet, and it allows the pump to operate at higher engine speeds effectively. It is important to note that modifications made to redirect the bypassed oil to the sump instead of the pump inlet will negatively affect the oil pump and allow cavitation to occur at lower engine speeds.”

Proper oil drain back is critical to assure that the oil returning to the sump is not impeded. “Proper oil management will ensure that there is enough oil volume in the sump to keep the end of the pickup tube submerged in oil,” adds Osterhaus. “Slow return of oil to the sump is caused by windage, acceleration, deceleration, cornering, and vehicle altitude, which all affect the time needed for oil to return to the sump and can expose the inlet to the oil pickup tube.

“There are many aftermarket examples of wet-sump lube systems in 1,500+ horsepower applications,” Osterhaus notes. “A late-model OE example is the wet-sump crankshaft-driven oil pump manufactured by Melling for the 2020 Ford Mustang Shelby GT500. It’s 5.2L supercharged Predator engine produces 760 horsepower and 625 lb.-ft. of torque. It has the distinction of being the most power and torque-dense supercharged production V8 engine in the world.”

Schumann explains that the OEM factory engineers design their oil pumps to be 30% (give or take 5%) bigger than the volumetric demand. “As the engine wears out, that 25-30% goes away, and you end up with 10% more capacity in a pump than a worn-out engine has. Then you get the phone call: ‘My oil pressure’s bad.’ If you have an engine consuming 10 gallons per minute, which is common in a big block motor, and the dry sump with five stages puts out 35 gallons a minute. The engine still wants 10. So why would you build for three times the volume than the engine wants? A well-designed wet-sump system can generate 10 gallons of oil flow with minimal aeration in it, with quick response time to the pickup tube, screening and the valving. Our ball valve wet-sump pumps react just as fast as a $4,000 – $6,000 dry-sump pump.”

A dry sump still has apparent advantages, say our experts, because you can customize for the specs you need with multiple stages linked together. And you’ve got a big reservoir tank, which Schumann says is no more than a cooling tank and an anti-air separation tank.

“The fact is, if you go to the drag strip and you go to an oval track, when you take 100 cars at random and open the hood, you’ll find over 90% of them have a wet-sump engine,” Schumann points out.

Oil pressure is just a yardstick, according to Schumann, and it does not have a whole lot to do with the gallons per minute (GPM) flow rate. “GPM is a more desirable attribute than pressure. Why did the NASCAR guys go down to 15 pounds of oil pressure? Because they have 30 gallons per minute flow rate. So they’re really only concerned with the flow.”

Oil pressure gauges vary from manufacturer to manufacturer, says Schumann. “They will not indicate anything that has to do with volume, they will not indicate aeration or contaminated oil. You can warm up a motor up on the engine dyno, take the drain plug out while it’s still dripping oil. Start the motor up with the drain plug out, and the oil pressure gauge will read almost where it was. The gears are lubricated, and it converts into an air pump because there’s no supply of oil and your pressure gauge says, ‘great you’ve got 50 pounds of air pressure, let’s go racing.'”

To help engine builders focus on flow rate instead of pressure, Schumann’s is in the final stages of testing a new gallon per minute (GPM) metering system that will be introduced around the first of the year. Schumann says it will be a portable unit that weighs about 20 pounds. It can be used on an engine dyno, an engine run stand, or at the racetrack.

Schumann adds that if a shop is building 25 to 50 LS engines per year, they generally know what to do to get the correct pressure, but they have no idea about the GPM. “I’ll go back to the NASCAR example: They’re not worried about 15-20 pounds of oil pressure. They’re worried about the 30 GPM of oil that is going through the engine.”