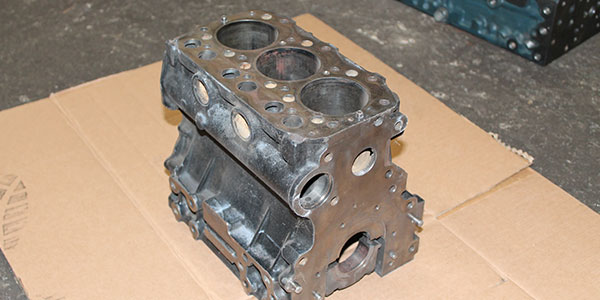 It’s really quite simple. Any discussion of the United States infrastructure leads to the fact that it is in dire need of repair. It’s here, it’s all in place, it’s just all old and outdated; the roads, the bridges, all of it.

“The orange barrel capital of the world.” That’s what we all called the city where I grew up. Funny thing is, when I moved to Akron, OH about 15 years ago, none of that changed. As far as you can stretch it; north, south, east, west, the roads are rough and the orange barrels are more permanent than the stripes between lanes.

Thinking narrow-minded, this only represented annoyance to me. Little did I know it would be the catalyst of an article about small-bore diesel engines, and as it turns out, the nucleus of one of the most rapidly growing opportunities in engine repair.

It’s really quite simple. Any discussion of the United States infrastructure leads to the fact that it is in dire need of repair. It’s here, it’s all in place, it’s just all old and outdated; the roads, the bridges, all of it.

Another detail’s importance I ignored as I grumbled about the slow traffic was the type of equipment swarming the roadsides performing the repairs. I never gave any thought to the overwhelming presence of the skid steer and the mini-excavator, not to mention the fact that on private farms around the country this type of equipment is increasingly commonplace due to their usefulness and versatility when compared to the more traditional large tractor or backhoe/loader.

Bringing light to these facts and the evolution of the small diesel market is Paul Kelly, vice president of Maxiforce Inc. “The overall theme in the United States is the infrastructure is done,” said Kelly. “The majority of the stuff that we’re doing now is all of the repair that it needs.”

Kelly is well-versed on the subject and cemented the reasons behind the growth of the small-bore diesel market. “We’re not building highways or bridges anymore,” said Kelly. “We certainly need to fix them, but since we’re not building any more, the idea of the big dozer such as the Caterpillar D9 and the dominance of that type of heavy equipment in the off-road market is over.”

This shift in the direction of the industry has reflected an immediate increase in the sales of smaller industrial equipment. “The equipment that is being sold in more volume than anything else in the world is the mini excavator and the skid steer,” said Kelly. “This is why there are 15 different OE’s making them, when 20 years ago it was only Bobcat, Case and Caterpillar. Now they’re all into it.”

Another indication of the growth of the industry is the emergence of trade shows. “There is a whole trade show dedicated to industrial and light, smaller equipment called the International Construction and Utility Equipment Show,” Kelly says. “Cat is selling more skid steers than they are selling dozers – by three or four times the volume.”

Kelly also pointed out another big contributor to the growth of the small-bore diesel market is 5G fiber-optics. “We’re laying cable again as if we were laying phone lines,” he says.

Topping off the growth of the market is the versatility of the steers and excavators. The number of attachments that are available is almost mind-boggling, with hundreds being available for industries that include mowing, landscaping, forestry, concrete, agriculture, snow and construction, just to name a few. “The skid-steer is shoveling snow in the morning, then hammering away holes on a sidewalk and being a forklift in the afternoon,” Kelly says. “It’s the Swiss Army Knife of equipment.”

The most common source to get parts for industrial equipment is a dealer, and traditionally this was one of the only resources. If you have one closeby or are a dealer yourself, it is an advantage, but if not, it can pose a road-block in easily obtaining the parts for small-bore diesel repair.

As the market grew along with the repair demand, difficulty obtaining parts found some engine builders turning away the work. For them and their customers, it proved time- and cost-prohibitive to perform small-bore diesel repair and customers would frequently find themselves just buying a new engine. Initially that hindered opportunity for engine builders and the question became, is there a way that engine builders can capitalize on this growing demand?

Six years ago, recognizing the increasing need for small-bore diesel engine parts, Maxiforce began to gear up in product developed for the small-bore diesel, including complete overhaul kits. “Our Yanmar range and Kubota range covers about 15 different OEs,” he says, “and our Yanmar line, for instance, which only consists of about 25 overhaul kits, covers about 2000 different models from all different makers of skid steers.”

A valuable aspect that has been brought to the table is the information and knowledge of small-bore diesel applications. Previously thought to be limited to only the dealer for parts, engine builders now have the option of also taking advantage of quick availability of rebuild kits for these engines. An added benefit is that engine builders can now profit on the kits as well as the labor, and still save the customer money over buying a new engine.

A glance at the Maxiforce website reveals expansive application charts and demonstrates their commitment to product knowledge, and Kelly pointed out that engine builders should not turn away work when they don’t know where to get the parts. There are many more applications that are covered by Maxiforce than meets the eye. “ThermoKing refrigeration units are Yanmar powered, some Toro lawnmowers have a Kubota. Perkins is an engine supplier and they sell their engines to everyone; we cover them all,” Kelly says.

With a good understanding of the market and looking for a field perspective, I decided to buckle up and dodge a few more of those orange barrels and headed across town to R&R Engine & Machine. I spoke with owner Bryan Menke to find out how small-bore diesel repair has been shaping up for them in recent years.

From a phone call beforehand, it sounded like they were no stranger to it, and upon walking back into the shop, there was no shortage of small-bore diesel blocks, heads and components waiting their turn for machining, evidence that R&R is already taking advantage of it.

Menke confirmed the increasing popularity and potential in the market. “It ramps up every year,” he said, “but it’s been in the last 10 years that it really started to grow.”

Interested in the longevity of these engines and what they typically run into with repairs, I asked about the subject. “Overall these are pretty good engines and how many hours you get depends on how well you maintain them,” said Menke. “Maintenance is the key to how many hours an engine will go before it needs service and we can get them with anywhere from 2,000 to 5,000 hours.” Menke explained that when they come in, they are typically worn out and low on compression, and they see a fair number of cracked cylinder heads as well.

R&R is an authorized engine dealer for a majority of the small-bore diesel manufacturers including Kubota, Kohler/ Lambordini, Isuzu and Yanmar, and this has given them an advantage when it comes to obtaining parts. They have the resources available and are able to order the exact parts they need for each and every job.

It’s clear the infrastructure for the small-bore diesel market is alive and well on both ends of the spectrum. Machine shops that have the established clientele and dealer connections are in full-swing taking advantage of the opportunity, and for those looking to capitalize on something new, a parts solution is easily at hand.