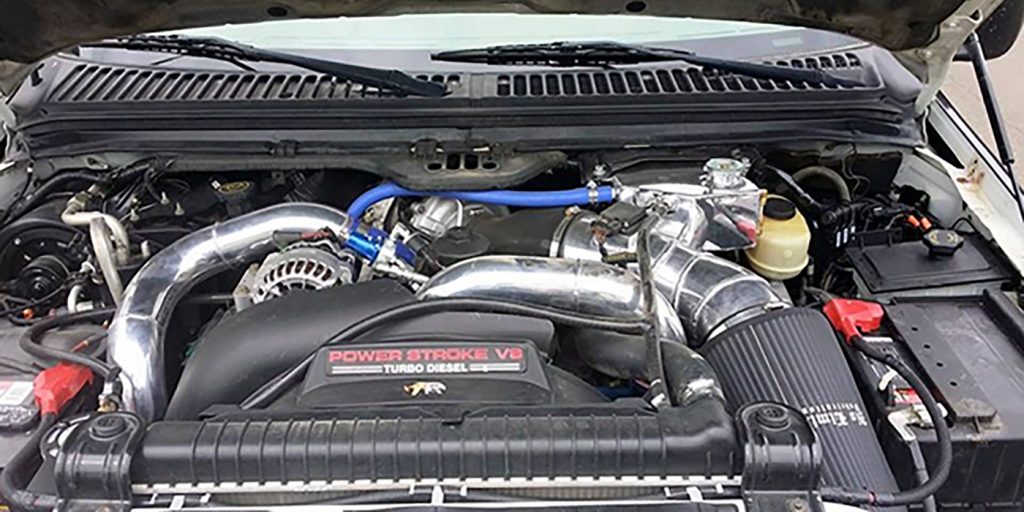 Shortly after finishing college, Derek Hamill and Curtis Ellyes got very interested in the diesel industry, and that’s all thanks to each of them having owned a diesel truck early in their driving years. They each began tinkering on their respective trucks and decided to form a business partnership, which today is called Vision Diesel Performance and is located in Aurora, OR.

“It’s been about 10 years now since we opened the doors,” says Derek Hamill, Vision Diesel Performance co-owner. “Curtis and I are 50/50 partners. I got into diesel because of my own personal rig. In high school, I drove a 1997 Ford 350 and I was always kind of tinkering with that and figuring things out. That transferred into my cell phone constantly ringing and having people ask me diesel questions. I met Curtis through that and he had a pickup as well and it just kind of snowballed from there. The phone didn’t stop ringing and we eventually decided it was time to turn it into a full-time gig.”

Vision Diesel Performance officially opened in 2011 and is focused on Ford, Chevy and Dodge diesel pickups. However, the shop recently ventured into the side-by-side market as well. The diesel shop has two buildings on the same property totaling 10,000 sq.-ft., and including Derek and Curtis, employs 8 people on staff.

“Our specific focus is diesel pickups – anything to do with those vehicles, whether it be accessories, performance upgrades, general repairs and maintenance,” Hamill says. “When it comes to cylinder head work, we do have a local machine shop here that we use. When it comes to complete rebuilds, we use an engine manufacturer out of Canada that sells long blocks and short blocks.”

In recent years, Vision Diesel Performance (VDP) has taken a dive into the performance side of the industry and decided to build a dedicated race truck for 1/4-mile drag racing.

“We have a Ford Powerstroke that is 100% internally modified with different pistons, rods, camshaft – the whole nine yards,” Hamill says. “That is a dedicated race truck. It’s a 6.0L – the one everyone hates.”

To start the race truck project, VDP bought a 2004 F350 single cab and stripped it down to the frame. The shop had the frame sandblasted and powder coated and put it back together with a stock 6.0L bottom end.

“The short block was completely stock with 200,000 miles on it,” he says. “We bolted on a better set of heads and all the necessary items like injectors and a turbo to make it go faster for 1/4-mile racing. It made about 900 horsepower at that point. It went all season and we ran a 1/4-mile best of 10.90 with the truck weighing about 6,500 pounds.”

At the end of that season, VDP decided to up their game with the 6.0L Powerstroke and tore the entire engine down to give it some upgrades.

“We’re also running a pair of BorgWarner compound turbos – an S476 and an S510 – it’s a 106mm compressor wheel. The Mahle pistons we used have valve reliefs cut in them and they got ceramic coated.”

Now VDP didn’t do all the work in-house. The shop did reach out to Midwest Diesel and Auto for some help with porting the cylinder heads, which were also o-ringed using their valve springs and pushrods. The heads also feature 2mm oversized valves.

Aside from the upgraded goodies already mentioned, VDP utilized 400cc hybrid Warren Diesel injectors, a dual high-pressure oil injector pump, a pair of FASS lift pumps, and got the engine tuned by Gearhead Automotive to bring the engine all together.

The new engine set up hasn’t been on the dyno quite yet, but at 900 horsepower before the rebuild, this 6.0L Powerstroke is now expected to crank out around 1,300 horsepower based on all the new parts. Time to go racing!