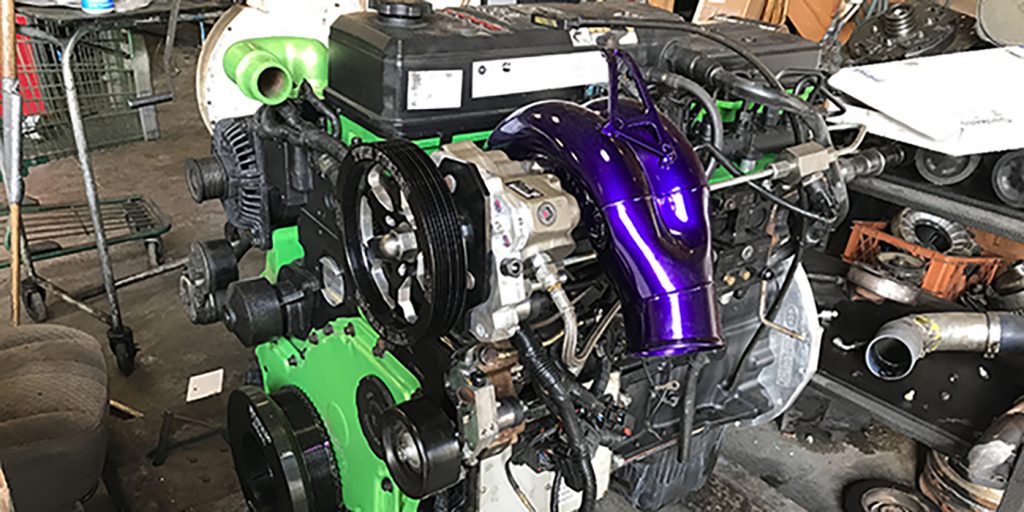 With dreams of travelling the world, Zac Thistle was once told he could get a job within 50 miles of any city if he was a diesel mechanic. Using that logic to shape his career, Zac went to WyoTech in Laramie, WY and became a diesel mechanic.

“I had always been a wrench growing up,” Thistle says. “I worked at a local truck dealer for Mack, Volvo, Sterling, and Western Star. From there, I moved down to Virginia and worked at Johnson’s Truck Center, which was another dealer. Then, I started getting into the performance side of things. I moved back to New Hampshire in 2009 during the economic crunch and I couldn’t find a job. I ended up on my own working on trucks and equipment here and there and that blossomed into where we are now with TMS Diesel.”

TMS was originally Thistle’s Mobile Service where Zac would do repair work on the road. Before long, Zac got a physical shop and the name just didn’t fit anymore, so he turned it into TMS Diesel, which is located in Weare, NH. The shop started in 2009 and today, TMS has 18 employees with 10 techs in 8,800 sq.-ft. of space. However, TMS is currently building a second shop to split the two sides of its business.

“We’re actually in the process right now of breaking ground on a new shop,” he says. “We’re going to divide heavy-duty and light-duty. Our shop is divided in half where we work on light-duty (250 to 550 pickups) and the other side of the shop is Class 5 to Class 8 heavy-duty and equipment. For space reasons it makes a lot more sense and the flow will be more efficient that way.

“The shop we currently have will be the heavy-duty shop and the new one that we’re building [on the north end of town] is going to be the light-duty shop. The new shop will be roughly the same size as the current shop and will have a chassis dyno and a clean room for engine builds. We’re shooting to be open by June, or this summer at some point.”

With the capability to work on so many kinds of trucks, it’s no surprise TMS Diesel’s slogan is, ‘Everything Diesel.’ And according to Zac, the shop lives by that.

“On the light-duty side, we do Cummins, Powerstroke and Durmax,” he says. “There’s a lot more Powerstrokes in our area, so we do a lot more of those, but there’s still a huge flow of all three of them. We also will get some random eco-diesel or a Jetta, but usually it’s the big three. On the heavy-duty side, we are a CAT dealer, so we do a lot of CATs, a lot of Cummins, Detroit, Mercedes, and a lot of equipment. The spread of engine brand is across the board.”

Currently, TMS sends out much of its machine work to other shops, but that will change once TMS’ new shop opens.

“We’re going to set up a machine shop in the heavy-duty shop,” Thistle says. “When you’ve got to get stuff turned around, we decided we’re going to go into machining because we need to. It should be a good change for us.”

“The Ford was a truck we had at the shop and the 5.9L Cummins motor was in a truck from around the area that we had always serviced and worked on in the past and it was wrecked,” says TMS tech Chris Battey. “We bought that truck at auction pretty cheap and that’s why we put the two together.”

The build first started around 2016 with a goal of making 800 horsepower. At that point, it was a stock motor with larger injectors.

“From there, it just progressed,” Battey says. “We started upgrading the fuel system and other areas and we ended up killing the bottom end. When we lost the bottom end, we decided we wanted to go farther and that it was going to be a 3.0 pulling truck and just push it a lot farther than we thought we ever would. We upped the goal to about 1,200-1,300 horsepower.”

TMS kept the stock 5.9L crankshaft with a TIG-welded front gear and added on a Garrett 3.0 smoothbore turbocharger. The engine also has an air to water set up, a Fluidampr and a Cummins to Ford adapter plate for the transmission.

“We haven’t dynoed the motor yet, but as far as turbo selection and fuel selection, we should be right there at 1,200-1,300 hp, which is pretty much the limit of a 3.0 smoothbore turbocharger anyways.”

For now, the TMS team has this 5.9L Cummins jiving well with its Ford F350, and we love it!

There’s no debating that Callies Performance Products manufactures a great crankshaft, among other engine components. We picked out a Callies Magnum Ford crank for our twin-supercharged small block Ford engine build, so we took the opportunity to review exactly what we got from Callies. Related Articles – Reviewing Holley’s Terminator X EFI System – One-on-One with