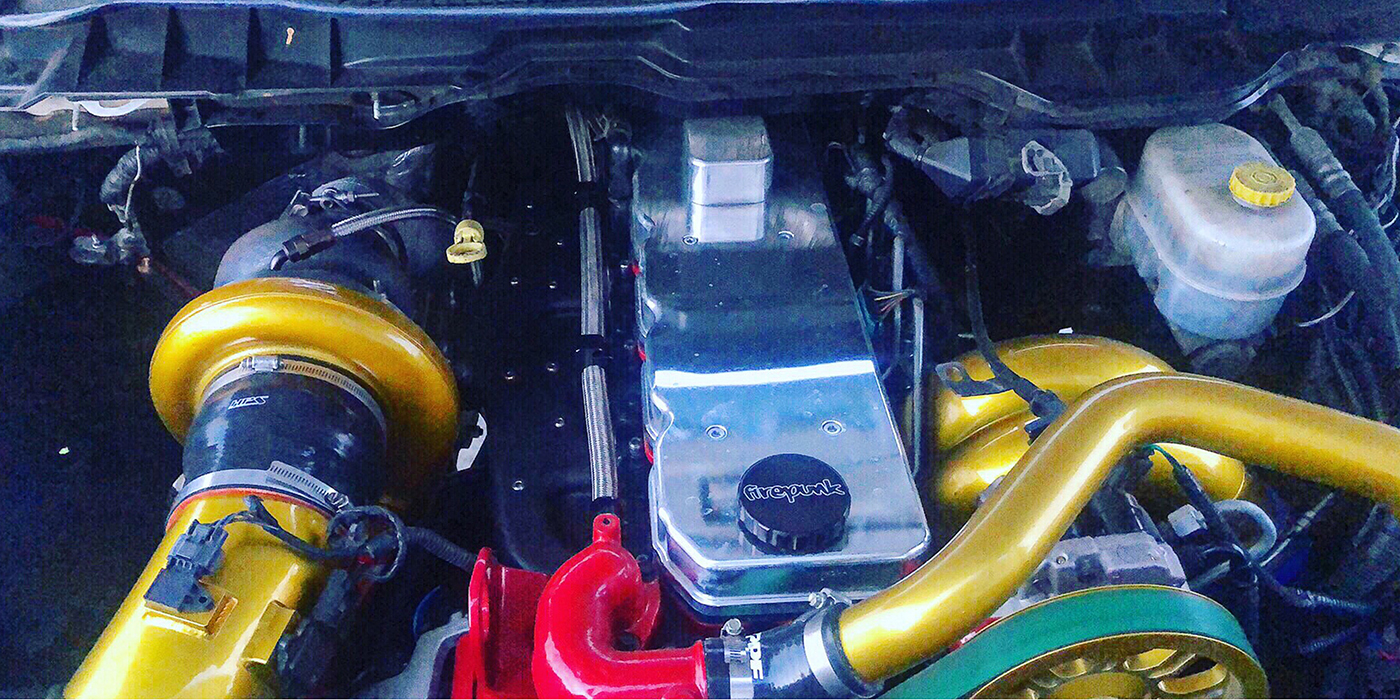 Coked Out Diesel Performance and owner Jarrett Beck are all about nitrous and big horsepower. The self-described adrenaline junkie wanted more horsepower in his own truck and went all out on this turbocharged 6.7L Cummins for a 2012 Ram 2500 drag truck. Find out what went into the build!

Jarrett Beck and his buddy Steven Roscoe own a diesel shop named Coked Out Diesel Performance located in Richlands, NC. The shop’s name is not one many people quickly forget, and kudos to Jarrett for coming up with something that stands out. The veteran-owned shop got its name from a moonshine-fueled conversation Jarrett and Steven had comparing a truck on nitrous to coke.

“I’ve never done coke in my life, but that conversation gave me the idea for Coked Out Diesel because my truck is also all white and we like to party – nitrous and big horsepower!” Beck says.

Jarrett grew up with plenty of gearhead influences around such as his father who loved to build drag cars and go to truck and tractor pulls, as well as growing up on a farm where Jarrett was surrounded by heavy machinery to tinker with.

“We always went to the state fair and local fairgrounds for truck and tractor pulls,” Beck says. “My favorite thing was the 3.0 class and the Super Stock tractors. That’s when I started to become a gearhead.”

His passion for cars and trucks had to take a hiatus however, as Jarrett enlisted for six years in the Marine Corps as a machine gunner in the infantry.

“I didn’t really get to mess around with trucks that much because I was always gone and deployed,” he says. “I got out of the Marine Corps and got a job as a civilian contractor working on base. But I wanted to start making money for myself, so my buddy and I decided to start a business called Coked Out Diesel Performance.”

The two-man diesel shop started in 2019 with a focus on repair, maintenance and performance work on Cummins, Powerstroke and Duramax engines.

“It slowly started taking off and now a lot of people know of me,” Beck says. “I’m a big horsepower guy. I’m an adrenaline junkie for some horsepower and going fast on the track. We do everything from repairs and full engine builds to transmissions. We’re also looking to expand into LS and Coyote stuff.”

Coked Out Diesel Performance does a good amount of work in-house, but uses a local machine shop named P&M Performance out of Jacksonville, NC for head work and bigger machining jobs.

One of the first diesel projects Coked Out Diesel did was Jarrett’s own truck, a 2012 Ram 2500 with a 6.7L Cummins under the hood. He used to have a 7.3L Powerstroke, but traded it in to make horsepower.

“I had a 7.3L, but I wanted another Dodge and I found this 2012 Ram 2500 on Craigslist for pretty cheap, so I bought it,” he says. “I’m a diehard Cummins guy, and it’s real hard to get power out of a 7.3L without spending way too much money and you’re still not going to be happy with the results. Those trucks are good for towing – you could pull a house down with those things – but they don’t make horsepower.

“At first, I was trying to get into the show side of things. I put on some 22×14 American Force wheels and some newer tires. I pulled the axles and suspension out and powder coated everything blue and paint matched everything.”

Jarrett admitted, the truck looked good, but the adrenaline junkie in him wasn’t satisfied. He wanted some horsepower.

“In January last year, I decided to take off the 8-inch lift we put on it and took the tires off, the wheels off, and dropped it down to level,” he says. “We threw on an S475 turbo, bigger injectors and a dual CP3 and took it to the track. However, we blew the turbo on it and blew the o-rings right out. We brought it back to the shop and stripped it down to the bare block. Right then and there, I said we’re going to take this to a whole other level.”

From April last year to the end of October, everything in the truck was ripped out. The engine build went from 700 hp to 1,350 hp at the wheel.

“To do that, we took the engine apart and dropped the head off at the machine shop to get it o-ringed, decked and a valve job done on it,” Beck says. “We went through the whole nine yards on the head – pushrods, valve springs, air intake, valves, camshaft, tappets. We put about $30,000 into the engine. We went [all out] on the build.”

“The bottom end we left alone in terms of rods, pistons and crank,” he says. “Without nitrous we have 1,351 horsepower. If we did a 220 shot of nitrous, we’d probably see something around 1,550-1,570 horsepower. The truck is used for street and drag racing.”

If you’re telling yourself you need a truck like this one, it’s actually for sale to any interested parties.