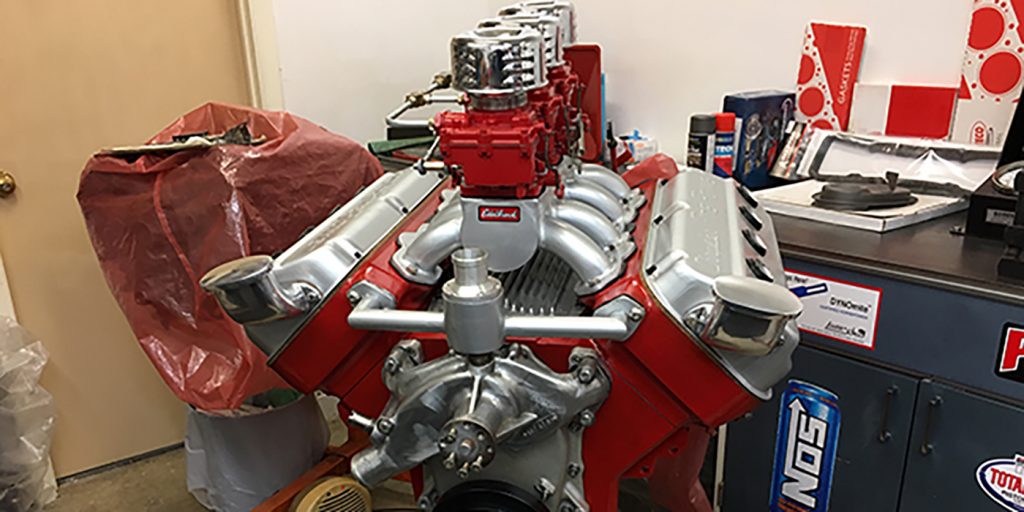 Now a septuagenarian, Ray Klaver grew up in the late-‘50s and early ‘60s – the tail end of the “Fonzie years,” old Fords and the Muscle Car era. As such, he has always been into the old school cars and hot rods, and decided to make engine work his career.

“I’ve always been a Chrysler guy,” Klaver says. “I was into that and wound up working in a shop that was a semi-production engine builder. In the mid- to late-‘60s, it was an engine exchange place where you come in and pull the motor out of the car and you put another one in and go merrily on your way. They built the motors there. I started out as an installer and then eventually wound up in the machine shop side of the house.

“That’s where I met Corky, who became my mentor. I left there and worked for him for a while. I then went into the military, but when I got out, I opened my own place.”

The engine shop Ray started in 1967 is now known as Southern Marine and Automotive, located in Guntersville, AL. However, the shop hasn’t always been in Alabama. Originally, the shop was in the Detroit area before relocating to Alabama in 1990.

Having been close to the Great Lakes, Southern Marine and Automotive used to do a lot of marine work, but that side of the business has shrunk since moving down south where the majority of the engine work today surrounds Ford and Dodge engines as well as restorations.

“I do what comes through the door, and it runs in streaks,” Klaver says. “I had Fox-body Mustangs for a while when those were really, really hot. I did a tremendous amount of Ford stuff, stroker stuff, 351 combinations, 347s, 331s. Currently, I’m getting a lot of restorations and period-correct hot rods. I’m also focusing on late-model Dodge stuff – 5.7L, 6.1L and 6.4L – for Stock and Super Stock NHRA racing.”

Southern Marine & Automotive does all its machine work in-house except for crank grinding and also has an engine dyno and a chassis dyno available.

One of the engines Klaver recently finished up, and one that got a lot of attention when it was in the shop, is a 331 cid Gen I Hemi. The customer of this engine was referred to the shop by one of Ray’s 5.0L Ford customers.

“He was looking for somebody to do this engine and he came into the shop, so I started working on it,” Klaver says. “The customer was on a tight budget, so I invited the customer in to do some of the work himself. It turned out pretty good. I may even hire the guy on the weekends.”

The 331 Hemi was pulled out of a ‘55 Imperial that had been sitting somewhere forever, according to Klaver, and it was horribly rusted. First things first, Southern Marine and Automotive got the block cleaned up and prepped and got rid of all the rust.

“We bored it and I had a custom set of Diamond pistons made for it,” he says. “I was able to have more control over the pistons, so I could get the right compression that I wanted. I bumped the wrist pin to a big block Chevy and I over honed the factory rod bushings in the old Hemi rods so that I could save him a buck.

“For the crank, I had a good friend of mine in Arkansas grind the crank. He ground it and did a nice stroke index job. I went through the head castings, which are old 331 Gen I Hemi factory iron heads, and once we got them cleaned, I put hardened seats in and replaced the guides with SI guides. We were going to put bronze liners in, but we wound up putting in solid bronze guides instead. I also put in all-new stainless SI valves and redid the valvetrain.”

Klaver also opted for a milder-grind Isky camshaft because the engine is a small cubic inch. It’s got a log-style intake on it that the customer supplied, and three, red, two-barrel carburetors sit on top.

“The customer even found a Chevy conversion deal where you can put a small block Chevy water pump on the front of it and went with steel pulleys rather than high dollar aluminum pulleys,” he says. “It really looks like it stepped right out of the early ‘50s when guys didn’t have a lot of money, but they had a really cool motor package. I think that’s what really makes this thing so neat is it doesn’t have a lot of high-dollar bells and whistles. It’s just so old school.”

That’s exactly the look and feel the customer was going for, and Ray delivered. Some of the other parts in the build were Corky’s Competition pushrods from Trend, King bearings and silver valve covers. Due to the tight budget, the engine retained its stock crank and rods as well.

“Everybody who looks at it and sees it, falls in love with this 331 Gen I Hemi,” Klaver says. “The gentleman who owns it is putting it into a ‘31 Ford. He wasn’t looking for any crazy power. He wanted reliability and for the thing to run well because it’s going to be a street rod and show car.”

After Southern Marine and Automotive got this old school build looking like new again, Ray says the 331 cid Gen I Hemi should crank out 300-310 horsepower.

“If it does that, I’d be a happy camper,” he says. “It’ll make enough power to spin the tires, and that’s really all he needs.”