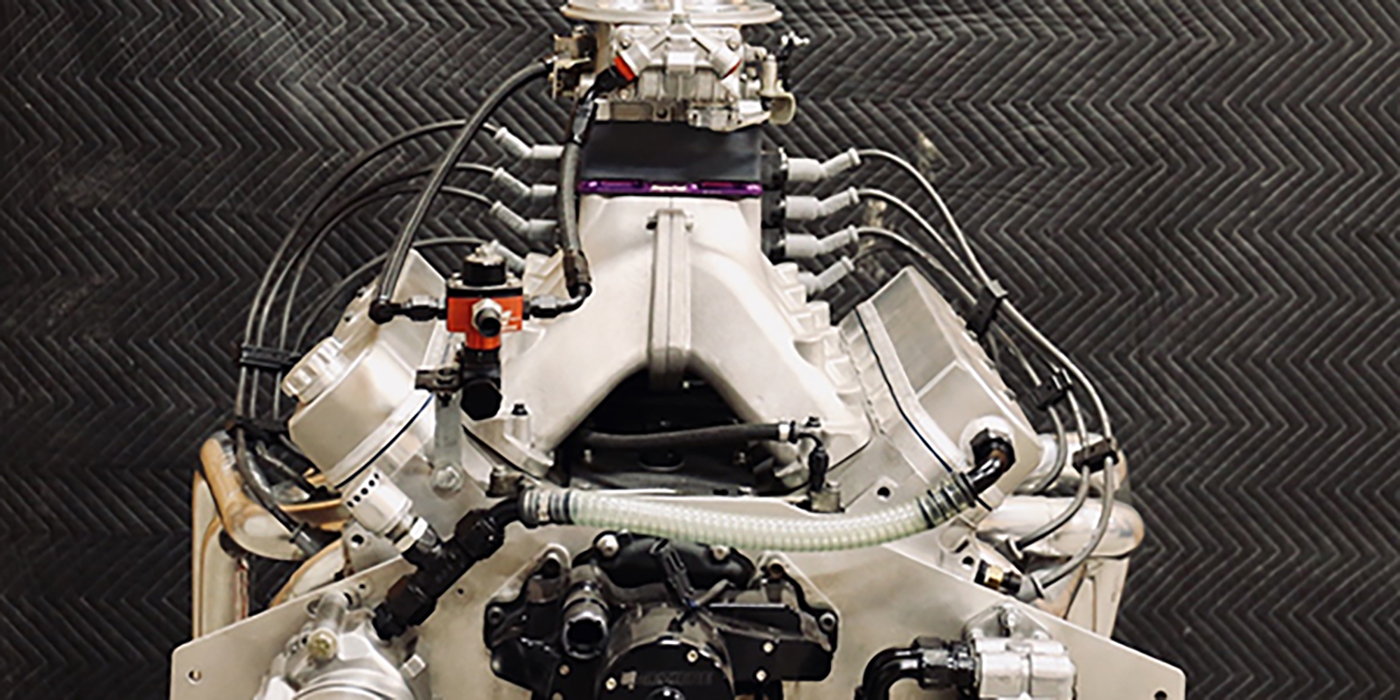 According to Brandon Tyson, there’s good power in small cubic inch. Everybody always thinks bigger is better, but in reality, one thing he proved is there’s also big horsepower in a well thought out, designed and built engine. Using Brandon’s roots as an all-motor guy coupled with a basic engine design, he had this dream of seeing what kind of power you can make with a stock cubic inch LS. Find out what went into this 376 cid LS3 build and how much power it ultimately made!

Brandon Tyson is a car guy, a racer and an LS engine enthusiast who recently reached out to us at Engine Builder magazine to talk about his latest LS3 engine build, which exceeded expectations and proved you don’t always need to spend a lot of money to get big horsepower. Needless to say, we were very intrigued to know more.

It turned out that Brandon has been drag racing all his life thanks to his dad being a racer himself who owned hot rods, street cars and even built an all-out drag car. Brandon got interested in cars as a middle schooler and started racing at 16 years old.

Unfortunately, Brandon’s dad has since passed away, but before he left, he instilled in Brandon the flare for making horsepower on all-motor, without the help of power adders, and that’s part of what led to Brandon’s most recent build.

“As I’ve gotten older and I’ve had more experience with motors and racing, the LS stuff has evolved,” Tyson says. “You can take these LS motors out of a salvaged Camaro, Corvette or truck and put together something to cruise around with or turn into a 1,000-horsepower turbo motor.

“However, I’ve never owned anything with a power adder. My father was adamant that there’s nothing better than making horsepower and being able to say it’s all motor. Using my roots of being an all-motor guy coupled with a basic or run of the mill engine design, I had this dream or challenge to myself of seeing what kind of power you can make with a stock cubic inch LS.

“I think there is a market who would not only be interested in the build, but would look to duplicate it on their own since it uses parts that are considered run of the mill and aren’t too costly.”

The stock GM block and heads used in the build were from an LS3 engine originally in a 2013 Camaro that Brandon had put in his ‘91 S10 truck to cruise around in with his dad. However, after his father died, Brandon stopped driving the truck. It was only recently when he decided it was time to get back to racing and the truck’s LS3 was a perfect platform to use.

Brandon needed a little help with the LS3 build, so he called on Eric Roycroft of ER Racing and the folks at Jon Kaase Racing Engines for machining, tuning and guidance throughout the build.

“I had been wanting to get back to racing and get back to the track, so at the end of 2018/beginning of 2019, I said let’s go ahead and build something I can race and mess around with,” Tyson says. “We took the LS3 motor out of my truck, which was 376 cid, and started to plan what we needed to do to make power while keeping it stock dimensions. We made sure that the block was good. We checked the bearings and did a cylinder wall check and everything looked good. It was a good foundation to build on.

“I knew I didn’t want to put a lot of effort and time into GM parts,” he says. “Not that there’s anything wrong with that. There’s a lot of guys who stick to the GM crank and the GM rods, but if this was going to be an investment, I wanted to buy the best parts possible to stuff in this motor knowing we were going to lean on it a lot.”

Everything done to the LS3 bottom end was done using stock dimensions to a GM 376 cid motor. For the rotating assembly, Tyson chose to use a Callies Stealth crank, a set of Carrillo rods and custom Diamond pistons that matched the stock bore.

“Looking at the heads, we knew we were going to use the GM heads,” he says. “GM makes a really good rectangle port head out of the factory, which is a good foundation to make power. The stock valve angle on these motors is 15 degrees and we wanted to leave it at the standard degree valve angle to make it a true challenge. Eric [Roycroft] did a ton of porting in order to get good airspeed down to the valves. He was able to get a five-angle valve job done on the heads and increased the valve to about as large as we could go.”

There was a lot of time put into the head work and the porting, especially with a naturally aspirated application like this LS3 would be. A lot of time went into the intake and head porting and Eric spent countless hours getting as much airspeed as possible through the heads, but also eliminating turbulence when the airspeed got down to the valve.

“There was a lot of thought put into the intake port design and the curvature down towards the valve,” Tyson says. “The heads flow over 400 cfm, which is astronomical for a stock head you can pull off a car.”

Moving to the valvetrain, Tyson knew these components would have to be able to withstand some pretty high rpm because there’s horsepower up in the higher rpm range and he wanted to take this motor close to 9,000 rpm, which is why the bottom end of the motor was built pretty stout. In addition, the block got half-filled with cement to the water deck for added strength.

“For the valvetrain, we went to Del West for some titanium valves, used Pac Racing valve springs and increased the pushrod size to a half inch on the intake and 7/16ths on the exhaust,” he says. “That’s a huge pushrod for a motor like this. We went with the biggest cam that we could from COMP Cams, which was over 800 lift, and we topped it all off with a set of Jesel rockers and a set of Morel .842˝ lifters.”

With the heads dialed in, it was time for Brandon to choose an intake and carburetor set up. He knew with the level of head work that was done, the heads weren’t going to work right unless they put a pretty good intake on top.

“In order to get it right, we knew the intake would have to be a two piece, so we went to CID for one of their BE LS3 intake manifolds in the two-piece version,” he says. “The carburetor was assembled by Eric with some help from Dale Cubic. It’s a 1250 Dominator. We needed to be able to put the most fuel and good air down into the intake and we knew we would need not only a big carburetor, but an efficient carburetor to work up in that 9,000 rpm range. I wanted to make the most power out of it I can.”

“That was on the first pass,” Tyson says. “We hadn’t adjusted it. We hadn’t played with the carburetor or the timing at all.”

“At 2,800 lbs., this engine shouldn’t have any problems running sub-9 seconds in the 1/4 mile with the right transmission and converter,” he says. “The intent when the motor goes into the vehicle is to be fuel injected and tuned for the racetrack with Holley EFI.”

What meant a lot to Brandon is not so much the feat of making a lot of power with the stock cubic inch LS3, but that a lot of guys out there can build an engine just like this.

“If there’s one thing I want people to take away it’s that you don’t have to get an aftermarket block,” Tyson says. “You don’t have to go out and buy aftermarket cylinder heads and spend all that money. There’s good power in small cubic inch. Everybody always thinks bigger is better, but in reality, one thing we proved is there’s also big horsepower in a well thought out, designed and built engine.”