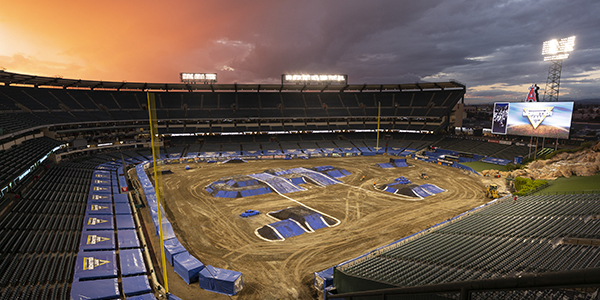 Due to fans living all over the world, Monster Jam divides its shows into either a stadium show or an arena show, with the big difference being space.

Feld Entertainment, the owner of Monster Jam, is always trying to show its crowds something they haven’t seen before. Today, with the internet, everybody can watch the 15-second highlight reel and that speaks to a greater issue of getting people to come to live events.

“It’s getting harder and harder,” says Jared Alderson. “People don’t have the attention span. Everybody’s busy too, so to try and get them there Feld absolutely tries to give them their money’s worth.”

That starts with the proper training for everyone involved in a Monster Jam event. They’ll have 200 people rehearsing shows and the different elements of a typical weekend.

“They have all the drivers, all the crew, all the trailers, all the announcers, they have paramedics, and they have all of the stagers and dirt crew present,” Alderson says. “The run throughs are actually really hard on the drivers. They have to climb out of a truck, run to a four-wheeler to simulate running all the way through an arena. They do that two, three, four, five times in a weekend – run in and run back to the truck and take all their safety gear off and climb on a four-wheeler and then run back and put all their safety gear back on and climb back in a monster truck. Then climb out of the monster truck and climb into a side by side, then climb out of that and climb back in the truck.”

Due to fans living all over the world, Monster Jam divides its shows into either a stadium show or an arena show, with the big difference being space. Large stadium shows offer more trucks and more room for bigger jumps, while arena shows typically have eight to 10 trucks in a slightly smaller environment.

“They’re going to a lot of towns and cities, two and three times a year,” Alderson says. “It allows them to be seen by more fans and more people.”

A typical Monster Jam show has an opening ceremony followed by numerous featured elements such as timed racing, two-wheel skill challenges, donuts, head-to-head racing, and freestyle. The elements of the show that get judged are placed in the hands of the fans. Monster Jam fans are encouraged to use their mobile device to score the competitions since there are no professional judges. The Monster Jam truck with the highest average score wins the competition.

From a crew standpoint, the different Monster Jam shows require a ton of pre-planning in order to have what could be needed for these trucks to perform at their peak.

“When they go do shows overseas, they bring everything with them that they might possibly need and they pack it into a container because in a lot of places overseas there’s no Summit Racing or shop that can overnight parts,” Alderson says. “They have to really, really plan carefully. The crew guys will bring extra rocker arms, extra pushrods and extra engines. If it’s anything other than a rocker arm or a pushrod or maybe an oil pump pick up, they’ll pretty much just change the engine.”

After the engines come out of the truck, they get sent to the engine shop in North Carolina where they’re disassembled and gone through. Every engine has a number associated with it, so when engine No. 35 comes back, all of the parts for engine 35 stay together to get evaluated.

“They do that for a couple of reasons,” he says. “If the engine had a failure and broke a connecting rod, maybe the rod hit the camshaft or something, you don’t want to send that camshaft to another engine. You want to keep all those parts together so you can quantify and qualify everything. It also helps us keep track of updates in the fleet and whether certain engines have the correct updated components.”

If the engine comes out of a truck, nine times out of 10, it comes back to the shop in North Carolina and gets disassembled, evaluated, machined, cleaned, and reassembled. It takes about two days to completely assemble the engine and run them on the dyno.

“The engine shop makes sure the power output is where it needs to be, which is around 1,400 to 1,500 hp,” Alderson says. “They make about 1,200 to 1,250 ft.-lbs. of torque and they usually make peak power around 7,100 to 7,400 rpm and peak torque around 5,100 rpm. With some of the advances of EFI having better control over the air/fuel curve through the rpm range and advancements with camshaft technology, they’ve been able to really flatten out that area under the curve and get a lot better drivability out of the trucks.”

The next time you find yourself enjoying a Monster Jam show, keep in mind the effort it took from hundreds of folks in order to make your jaw drop.  EB

Cheers to a New Decade

Social Distancing Out on the Open Water
Connect with us