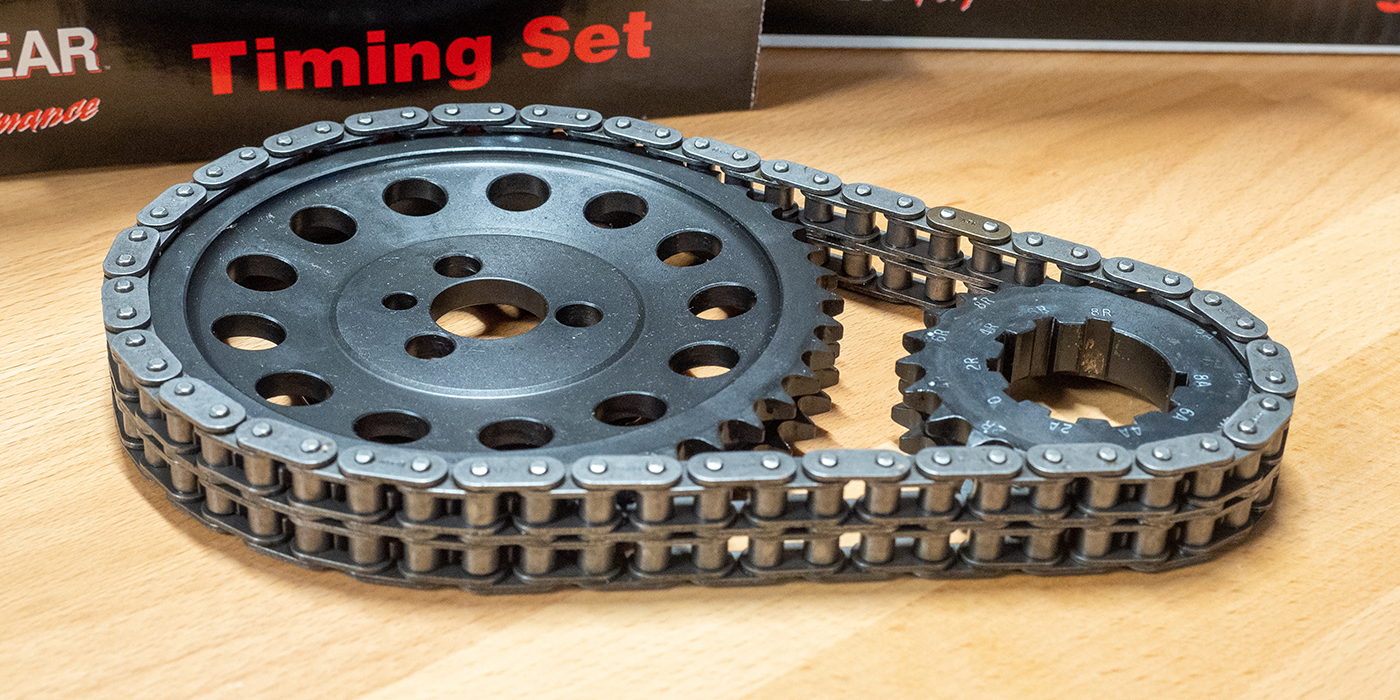 Timing sets aren’t the most glamorous or trick item in a racing or street engine, but it is a very necessary piece. If your timing isn’t right, the list of engine damage can get lengthy.

You’ve probably read a lead similar to this a number of times in our magazine where we say how crucial a certain part is to the overall performance of an engine. Well, when it comes to timing, there really aren’t many things more important to an engine outside of oil. Timing sets aren’t the most glamorous or trick item in a racing or street engine, but it is a very necessary piece. If your timing isn’t installed or set correctly or performing properly to keep your engine in time, the list of engine damage or possible failures can get lengthy.

That’s exactly why for the past 50 years, performance and racing timing sets have been innovated upon and features have been added to eliminate issues and to make timing adjustments much easier.

Conventional link belt timing sets, for years the standard of the auto industry, employed a multiple link chain secured by a series of small diameter pins. The design created a significant amount of heat due to friction and wear occurred rather quickly in performance applications. Link belt sets earned their bad reputation when automobile manufacturers began using aluminum camshaft gears with nylon or nylon-coated teeth. The nylon gears supposedly provided quieter engine operation, but after the engine ran a number of miles, the nylon teeth would crack and fall off, causing slack in the chain and eventually the engine would “jump” time.

The broken nylon teeth, which usually wound up in the bottom of the oil pan, also got easily sucked into the oil pump pick-up, restricting oil flow and causing serious engine damage. The shortcomings of the link belt systems inspired manufacturers to develop better timing sets, which were ideally suited for performance applications.

“What was the game changer for us and the race industry, when it comes to timing drive systems, was the introduction of True Roller in 1970,” says Jason Thompson, VP of product development for Cloyes. “The concept was applying a roller bushing to the chain itself, so you had roller engagement between the sprocket and chain. It was revolutionary at the time.”

Roller chain timing sets allow the chain to roll across the teeth of the cam and crank gears with little effort for negligible horsepower loss and improved friction characteristics.

“From there, we kept making advancements in the material,” Thompson says. “Things started out with cast iron cam sprockets or ductile iron cam sprockets, and with time, we moved to billet and induction heat-treated billet for cam and crank sprockets.”

While cast iron timing sets can still be purchased and used, the vast majority of performance sets have gone to better quality materials for obvious reasons.

“I would think the biggest change over the years has been, if we’re talking about a conventional three-piece set for a small block Chevy or Ford, would be improvements in material,” says Cale Risinger, technical services manager for Melling. “Going from cast iron up to steel sprockets has been much better, especially with coatings. A lot of the coatings really make a durability difference as far as lubricity goes.”

Despite the leap taken with the introduction of the roller chain, there were still issues associated with using a chain set. In 1979, Jesel introduced its belt drive systems.

“The belt drive originally was designed to deaden the cam to crank harmonics, which a chain or a gear drive would not do,” says Joe Massey of Jesel. “It’s a much smoother timing curve. It was also designed to make ease of changing camshaft timing without having to take the entire front of the engine apart.”

According to Jesel, belt drives don’t stretch like chains can and don’t wear as quickly either. However, belt drives can be much more costly to begin with.

“The basic design has been the same all this time, it’s just newer, better materials, better belts, but the basic design is still the same from 1979,” Massey says. “There’s really not many innovations you can do. The only thing we can do is keep up with the new engines that come out.”

While belt drives introduced the ability to easily change cam timing without tearing the engine down, other manufacturers were quick to make improvements to their timing sets. The early ‘90s saw a wave of innovation from manufacturers like Cloyes.

“In the early ‘90s, Cloyes was busy patenting design concepts like Hex-A-Just and then later we added Quick Adjust, nine keyway, race billet, and things like that, which are more traditional, high performance products,” Thompson says. “Something unique to Cloyes is the hand matching process in high performance. Our premium race sets are not just three pieces or three pieces and accessories thrown in a box, but rather they are matched on the fixture to the center distance of that engine application for both center distance and run out, which is very unique to the Cloyes process and very important to our race product history.”

“Hex-A-Just is a patented design concept to build infinitely adjustable cam timing and not be stuck with an increment of one to two degrees, but adjust to the degree wheel exactly where the installer needs the timing to be,” Thompson says. “We also added the quick button cover, which is an aluminum, two-piece cover with an access panel that you could remove from the timing cover center and have access to that Hex-A-Just bushing and the three bolts that hold the cam sprocket onto the camshaft. You could actually make timing adjustments with just the water pump removal and access plate removal instead of having to tear down the whole front of the engine.”

Thompson says this innovation has been a big help to engine builders and tuners when their engine builds are getting dialed in on the dyno.

“In engine building, the secret sauce is how all those performance components work together with the tuning,” he says. “Hex-A-Just is getting used on the dyno quite a bit for that purpose because they’re trying to find what timing works best with all those combinations – camshaft profiles, lightweight cranks, etc.”

Companies like Melling also added more benefits to their timing sets that made the work of the engine builder much easier.

“Some of our newer sets feature benefits such as individual oil holes for each roller and chain plate thicknesses have increased 30-35% with chromium infused chain pins to resist wear,” Risinger says. “We also have polished chain plates for reduced friction and guide wear, induction-hardened, manganese-coated, billet steel sprockets, which helps with initial break-in lubrication. Some of these sets also feature a fixed roller design to reduce the amount of moving parts. We also offer sets with either Torrington bearings or brash washers to help reduce galling and rotational resistance.”

Despite an overall better quality to performance timing sets, issues can and do still arise. After all, what’s racing without breaking parts and finding solutions?

“One of the biggest killers of timing that I see is lack of lubrication,” Risinger says. “With extended oil change intervals, people just don’t seem to follow a maintenance schedule like people previously did. That leads to damage because if you don’t have proper lubrication onto the chain, you’re going to build a lot of heat and it’s going to stretch.

“Chain stretch is obviously going to affect your timing and once it stretches far enough, the sprockets are going to skip and the engine will go out of time, which if it’s an interference engine, you’re going to end up with bent valves. It could cause massive engine damage. The 5.7L Hemi is an interference engine, so if you lose a chain on one of those, it’s going to crash valves and break valve guides and everything else.”

Risinger also warns that with so many people building up engines from ‘junkyard’ finds, you’ve got to ensure you have a viable donor engine that’s capable of producing good oil pressure. On the flip side, if you’re using a belt drive, oil and fluid on the belt is less than ideal.

“The worst part with a belt is getting any kind of fluid on it, like oil,” Massey says. “Whereas obviously the chain runs an oil, a belt would have to be changed if it was contaminated with something. Normally in a drag race application, we say about 250 passes before you should change it just for cheap insurance.”

Obviously, normal wear, tear and fatigue will occur due to the demands placed on components in performance engines, but those are opportunities to introduce solutions to a product like timing sets.

“It’s really interesting working in high performance because when you have a failure, that doesn’t mean something was wrong,” Thompson says. “It simply means that you’ve got a new set of parameters and demand on your race product that you need to learn about and figure out how to overcome.

“We actually had an example of that with dirt track motors where their combination of a very radical cam profile coupled with a lightweight crank and a lightweight balancer was introducing so much harmonics that it started challenging our premium race chain. We got to work and found a way to assemble double row premium chain to endure more fatigue. It wasn’t a matter of the customer taking the harmonics out. We needed to figure out a way to survive the harmonic issue. We were able to figure out a way to improve the chain so that it would endure that increased level of harmonics and demand. When you figure out solutions and you fix problems, you build partnerships and friendships that way.”

With manufacturers upping the quality of timing sets through materials, coatings, accessories and access to adjustability, the current trend is making sure they have the right applications covered.

“The small block Chevy performance timing sets are probably still one of our biggest movers,” Risinger says. “We still do quite a few for the small block Ford with the adjustable keyway sprocket. Our LS sets are really starting to take off and I think you’ll see more timing sets made for the overhead cam engines moving forward.”

“One of our more recent introductions has been our LS performance timing drive systems and expounding on that with more premium chain systems, accessories and features,” Thompson says. “We’re watching our LS sets slowly replace our small block Chevy volume. LS has been a huge success for us.

“Our next step is the GM LT and applying the same technologies that have been working for us. However, the LT series adds a new challenge. You don’t have a previous LT engine that did not have VVT. All LT engines have VVT cam sprockets, so the LT series is going to get us into the concept of a billet sprocket that replaces the VVT original cam sprocket.”

Again, timing sets are by no means the flashiest part of the engine, but they are certainly one of the more important. For that reason, it’s good to know it’s an area of engine development that isn’t resting on its laurels. What will the next 50 years have in store? EB

Motorcycle Valve Seats
Connect with us