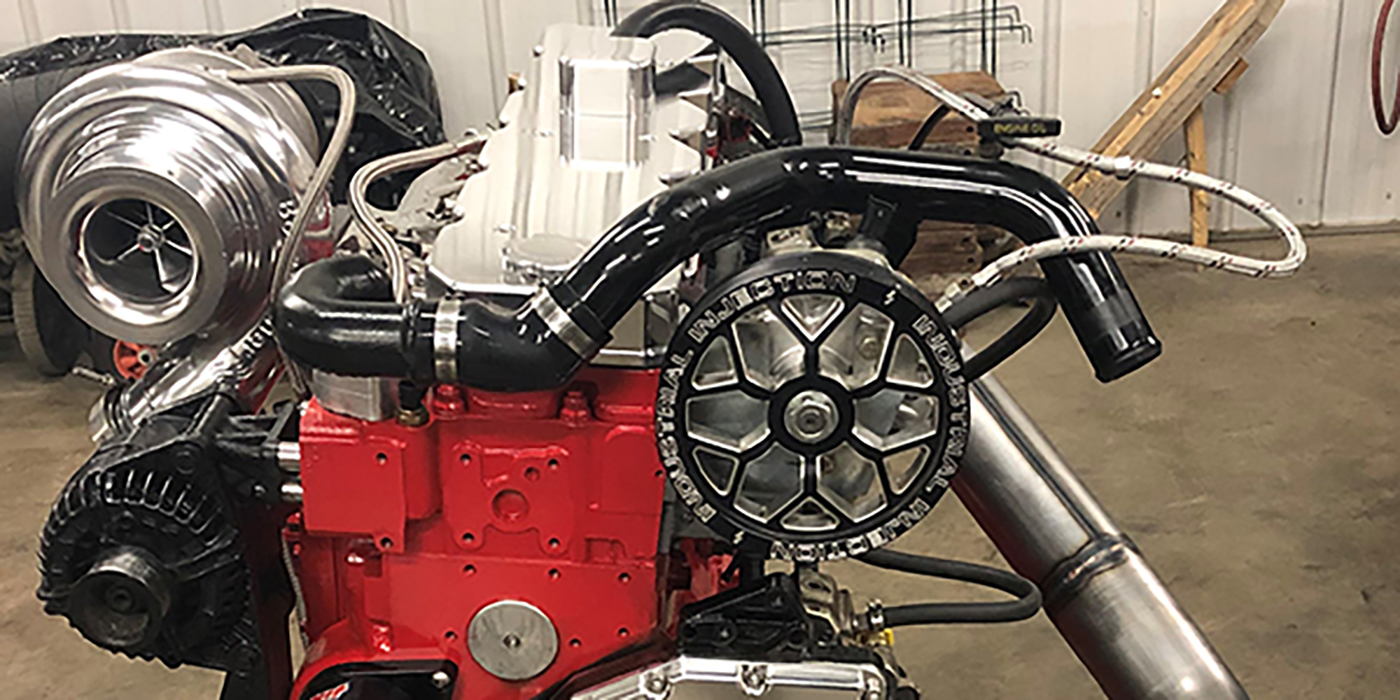 With the dream to one day compete at the same truck and tractor pull events he saw as a kid, Jeremy Wenger of Twisted Piston set out to achieve that goal. The shop went all out on a 3.0 Limited Pro class 5.9L Cummins build. Find out why it earned them Rookie of the Year in OSTPA in 2019.

As a kid, Jeremy Wenger would attend truck and tractor pulling events and dream to one day be able to compete with a truck all his own. Growing up in a family that owned a construction company, Jeremy was well on his way to accomplishing that dream.

Working in construction, Jeremy quickly got plenty of experience running and fixing heavy-duty equipment. From there, he attended UTI in Phoenix and earned certifications in their diesel program and Cummins program, graduating in 2010. He spent a few years working at a Cummins dealership in Northfield, OH before ultimately beginning the endeavor of starting his own diesel shop, Twisted Piston in 2013, located in Dalton, OH.

“We do anything from three-quarter ton pickup trucks through Class 8 over-the-road trucks,” Wenger says. “We work on the whole thing – bumper to bumper – but we do a lot of engine work and engine building from your stock street rebuilds through performance builds.”

Twisted Piston has eight employees – five techs and three office staff – who help to manage the 4,500-sq.-ft. shop. While Cummins engines are a personal favorite of Jeremy’s, Twisted Piston doesn’t discriminate against any diesel that comes in the doors.

“We do a pretty good mix of all three – Cummins, Powerstroke and Duramax – when it comes to the pickup truck side,” Wenger says.

However, when it finally came time to make his dream of owning a pulling truck a reality, Jeremy of course found a Cummins powerplant to do the job.

“We have a 3.0 Limited Pro diesel pulling truck that’s been all built in-house,” he says. “Our pulling truck was assembled last year, so last season was the first season on that particular motor and chassis configuration. It’s a 5.9L common rail platform. The chassis is a ‘95 Dodge chassis, so those don’t exactly go together. In order to do the common rail, which is an electronic motor, I actually built the engine harness in-house so we could communicate to that computer for that engine and tune it, data log it and make that work in that chassis.”

As with any bucket list item, you try and push in a direction to achieve your goals, and when Jeremy came across the ‘95 Dodge 2500 in New York 7 years ago, he knew he had to have it.

“I picked up this truck with about 250,000 miles on it,” he says. “It was a completely streetable, normal, ‘95 Dodge 2500 with an automatic trans in it and a 12-valve engine. I think I drove it about five miles and then the motor came out of it.

“From there, it was a multi-year process of deciding what direction we were going to go with it. Whether we were going to go all the way to the 3.0 class or build it for a work truck and things just progressed and developed and we took some time to accumulate parts over the years. Eventually, we decided to go the whole way and go to the Limited Pro class.”

“The only thing original on that build is the 5.9L block, which was bored out, and the 5.9L crank is original,” he says. “It’s got Diamond pistons and Carrillo rods. It’s all tuned with EFI Live through that harness that we built in-house and we worked with Starlight Diesel on the tuning side of it.

“For the Limited Pro class, you can run one single turbocharger with a 3.0˝ inlet. That’s the specification for that class. That’s kind of the limiting factor and how they control the power and keep things the same inside of the class.”

To top off the 3.0 class Cummins, Jeremy relied on oil that he’s been using since day one of opening Twisted Piston, and that was AMSOIL.

“This engine has been running AMSOIL ever since it was put together and we’re an authorized AMSOIL dealer and use it religiously on our big builds like that,” Wenger says. “I’ve been using AMSOIL since I started the shop in 2013. We’ve been very happy with their oil.”

Last year, once the 5.9L Cummins was fully assembled, Jeremy went to Pine Hill Auto in Carrollton, OH to run it on their engine dyno and get it tuned and dialed in.

In their first year of pulling competition within the Ohio State Tractor Puller Association (OSTPA), Twisted Piston’s 5.9L Cummins and ‘95 Dodge earned them Rookie of the Year in the Limited Pro class for OSTPA. The shop hasn’t put together a final schedule for the 2020 season yet, but Jeremy says they plan to either pull OSTPA again or USA East – or maybe a combination of the two.

Advertisement
In this article:AMSOIL, Cummins, Diesel of the Week, Tractor Pulling, Truck Pulling