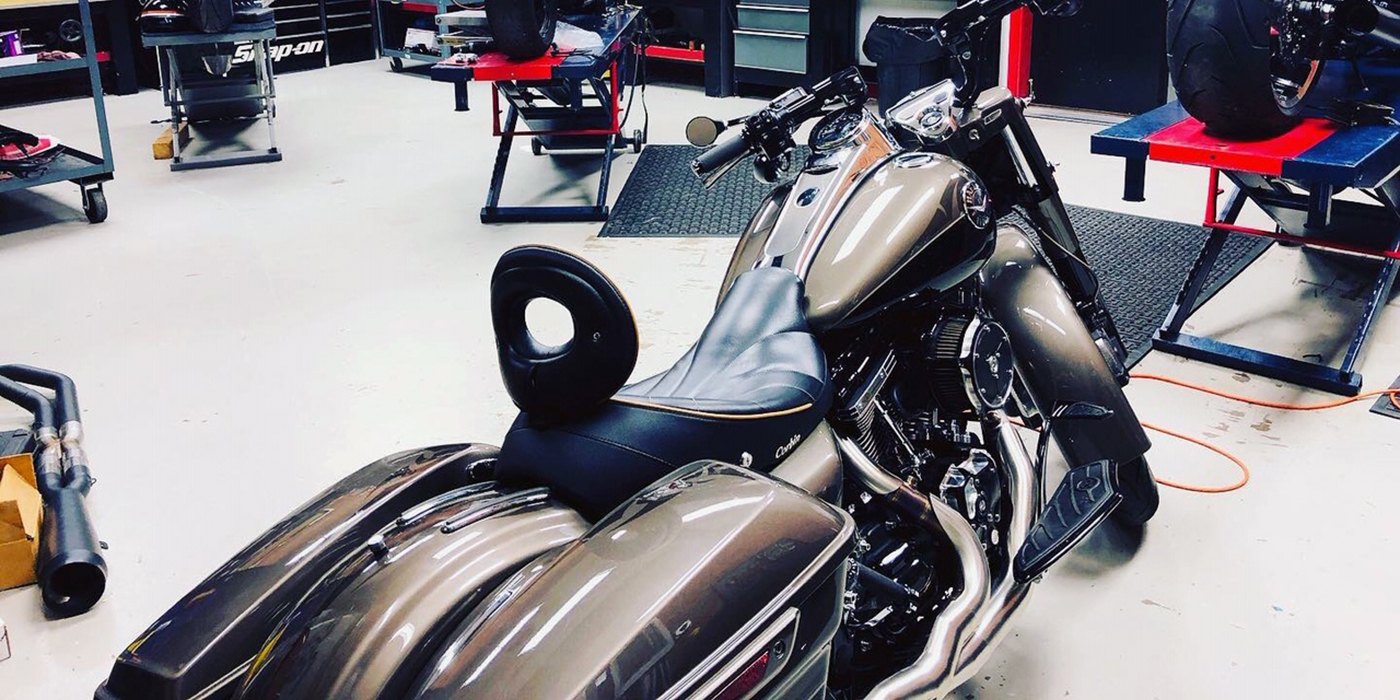 The V-twin market has been slowly tumbling downhill for the past few years, but it’s not all bad news. The two-wheeled community is coming together to form initiatives that will bring in new riders, and Harley says it signed up more than 3 million of them in 2019.

The American V-twin aftermarket has taken a hit alongside the most influential brand in the motorcycle industry – Harley-Davidson. With the demise of several top V-twin enthusiast magazines and events, the market has been slowly tumbling downhill for the past few years. But it’s not all bad news for American motorcycle fans. The two-wheeled community is coming together to form initiatives that will bring in new riders, and Harley says it signed up more than 3 million of them in 2019.

While Harley’s sales numbers are down globally, the Motor Company picked up market share in the U.S. in the last quarter of 2019. The company also rolled out a new 131 cid crate motor recently, based on the Milwaukee Eight platform. With many of these engines now coming out of warranty with the O.E., more engine builders are working on them to make more power.

We asked Tom Reiser, “TR,” owner of T-Man Performance in Kernersville, NC, about the introduction of Harley’s new 131 engine kit: “I don’t fight that, because you’re never going to compete with Harley-Davidson’s prices. Rather, what we do is offer better components. Harley-Davidson has its own constraints, so they are not putting much more in than about 10.8:1 to 11:1, which seems like a lot, but our philosophy on motor builds is a little different. An example of what we do is we have developed a series of pistons that work with the existing Harley-Davidson cylinder kit and head configuration and will allow for a more aggressive cam while still having excellent rideability. In addition, we offer a CNC upgrade on the cylinder head for this existing kit.”

Marty Smestad from Capitol Speed Shop in Seattle, has owned his small rebuilding shop there for about two years, but before that, he traveled the world as a Harley technician.

“Harley has a training program where if you get to the master level, you’re a lot more desirable in a lot of places. I got to work in Alaska for a little bit, and Australia working on bikes as much as I could. I was living out there for a couple of years and then ended up moving back to the States. I took a cylinder head machining class in Minnesota. It was Northwest Technical College’s high-performance engine machine program that was run by Paul Nelson.”

Smestad says he wanted to learn how to work on Harley cylinder heads, and Nelson’s machining program helped him bring his skills to the next level. “I learned a fair bit from [Nelson] and airflow type things, which helped me advance my career as far as doing the cylinder head work that I do today.”

As virtually a one-person operation, Capitol Speed Shop does very little marketing except for what it posts on Instagram and Facebook. Most of Smestad’s work is from word-of-mouth, and he only takes customers by appointment (at least for now). He currently spends most of his days working for a Seattle-area H-D dealership, but spends his off-hours at his shop doing machine work on everything from a Knucklehead to the latest M8.

“I’ve also been able to work on some older bikes,” Smestad explains. “There’s an event called the Race of Gentlemen for both cars and bikes. I’ve been helping a team for the last two years, and we’ve done well. We won a drag race in Santa Barbara; a street drag race. The engine was from a 1947 Harley Knucklehead. Once word gets out that you work on old bikes, then people start coming out of the woodwork.”

Smestad says what he is currently working on is some refurbishing and flow work on a Panhead show bike. He is also working on a vintage Ironhead Sportster with a crank up rebuild, while also trying to find time to work on his own projects. “I just started a night class at a technical college, and the instructor there is a chopper guy. In the class, you build a frame jig and can build a complete frame.”

While Smestad says he mostly works on older bikes, he is still working on the new engines as well at the dealership and his shop. “I’ve been doing it all, pretty much,” he says. “I’ll still work on new bikes and do fuel injection tuning on brand-new Harleys. But it just seems that once people know that you’ll work on an old bike and do a good job, then you get to that.”

Smestad explains that not every Harley dealer works on the old stuff anymore. “I do know some dealerships that will work on old bikes, and they’re set up for that. But the way they bill their work is a lot different. There’s no flat rate. You have to charge whatever it takes for the job straight hourly.” For his shop, he may give an estimate for what he thinks the job will cost and ask for half up front and then the rest to finish the job.

Smestad makes no bones about it: the motorcycle market is tight, and it is a challenge to make a living from his shop alone, which is why he works at a dealership as well. But he hopes to someday build and develop drag bikes from the ground up. With his technical training and background, there’s no doubt he’s headed in the right direction.

T-Man Performance likes to “stay focused on developing a high-performance touring motorcycle,” according to owner T.R. He says you can’t get caught up in what everyone else is doing but need to remain true to the research and development as well as providing a quality product. That kind of quality comes from surrounding yourself with great people in all areas of the business. Whether it’s in the machine shop, shipping and receiving, or customer service, they concentrate on Harley performance, and that’s it.

T.R. notes that he’s been in the motorcycle industry for 40 years and learned much of what he knows from his dad, who raced one of the fastest drag race Super Sportsters in the country in the 1960s and ‘70s.

“I started sweeping floors for my father when he managed AD Farrow Harley-Davidson in the ‘70s. Later in my career, I was a line mechanic at that dealership, worked with the high-performance department at Zippers Performance and then moved back to Columbus to Easy Riders. I’ve been around this stuff since I was a kid. I met my wife while I was on the race circuit, and she lived in North Carolina. It wasn’t a hard decision to relocate after being down there in the winter. We opened T-Man Performance in 1997, so we’ve been around for 22 years now.”

T-Man Performance produces many videos on YouTube to show customers what the shop does. “I don’t go back and try to make it perfect. Our clientele likes the videos raw and unedited. We just do them with a phone. We have found we need to educate our customers because a lot of these guys think they know what they want from something they read on the internet. What we try to do is to educate them on what’s internet gossip, what the truth is and what they can expect from us.”

Everything in the industry has just changed tremendously, T.R. declares. “You have to stay on track to keep up with the changes.” Brandon Reiser, TR’s son, is being groomed to ensure T-Man’s legacy continues along with one of his longtime employees, Brian Kochanski, who has been with the company for 16 years and is a whiz with CNC and CAD. “They’re the next generation that will take it from where I leave off.”

According to Reiser, the Milwaukee 8s are a growing segment of their business. “I think we just stamped our 142nd set of heads last week. We’ve got two five-axis CNC machines here, and we do everything in-house. We’re just getting to a point where a lot of M8s are coming out of warranty. And one of our more popular upgrades is the bottom end service where we install the scraper system that we developed because we knew we could improve the scavenging design on the M8 engines” (you can see the result on T-Man’s YouTube channel).

The M8s, have a windage tray but TR felt that they could make a more efficient process. “With the big bores, the pressure was just blowing the oil away from the pickup. We’ve put a lot of effort into the development of our scraper. We split the case and profile the cases on the CNC machine to fit the newly designed scraper, making for a much more efficient scavenging.

Another product T-Man Performance has developed is a more efficient head breather. “The breathing system and the oiling system on the M8s are some of the areas that we have focused on to enhance performance.  These modifications will enrich the bigger bore motors coming in the future. If you look at our videos on YouTube, you can take a closer look at the new head breather, which is all billet for the M8s.”

As Reiser pointed out earlier, they like to stay in their lane and focus on their work, and they do a lot of it from beginning to end. T-Man Performance also does complete teardown and installations of all of their performance kits and bottom-end services in-house. Each kit is developed around the customers’ riding styles, which makes the kit unique to each customer.

While the market may be suffering from a lack of new riders, the ones who are riding are getting performance engine work done. EB

Advertisement
In this article:Harley-Davidson, Motorcycles, v-twin