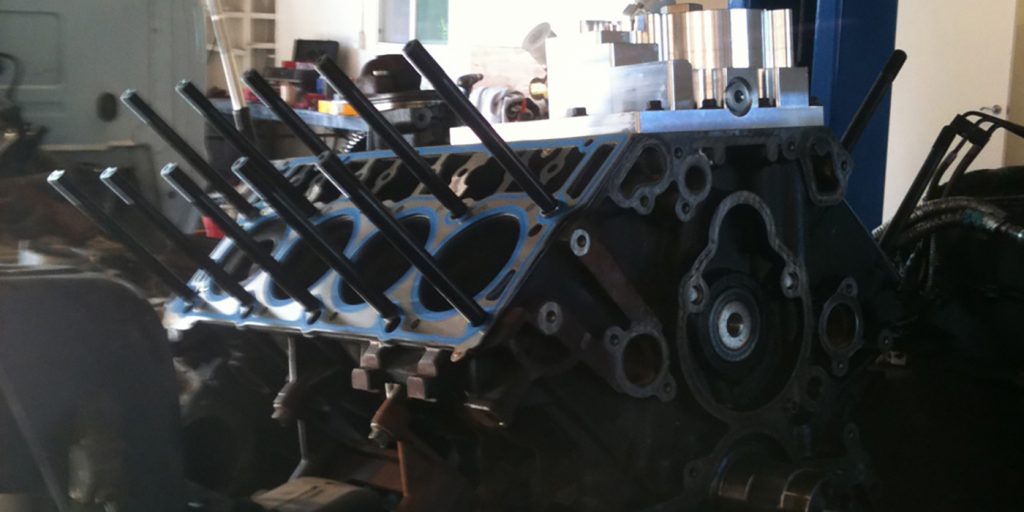 For Jason Loeliger, being a Ford guy was a passion passed down from generations of his family. The biggest influence – his grandfather – who owned a ‘36 Ford pickup and a ‘36 Ford Cabriolet and loved Flathead V8 engines.

“That was the start of my automotive journey of sorts,” Loeliger says. “A lot of kids go to auto shop and do those sorts of programs and whatnot. I didn’t do any of that. I worked on my own projects at my house. It all started with my ‘70 Bronco as a 15-year-old.”

After finishing high school, Jason went on to study at the Sequoia Institute to get his professional start in the automotive industry. With his gained knowledge and experience, he found a job at a Ford dealership.

“Fast forward, I spent 10 years at a Ford dealership and it was there that I really started to hone in my craft from what I started building in my garage to 6.0L overhauls. I did a lot of those at the dealership. That was how I became a 6.0L guy. I’ve always enjoyed working on engines in the truck, out of the truck. I love just building engines on the stand, but it doesn’t always work that way.”

While working on Fords was right up Jason’s alley, the dealership career wasn’t checking all the boxes after 10 years on the job. He began looking for something new.

“In 2011, I was at the Ford dealership and had been doing 6.0L warranty work as a flat-rate heavy-duty tech since 2003,” he says. “I was, as you can imagine, becoming rather unsatisfied with how that was working out. I had started doing Bullet Proof Diesel products at the dealership and I had this grandiose idea that I was going to open my own shop out of my garage. That was my big plan. I wanted to be an installer for Bullet Proof Diesel, but I didn’t have a brick and mortar store.”

Jason’s friend from high school, Mark, was also looking for a change of pace and the two guys reconnected at an opportune time.

“Mark grew up with a dad who had been in automotive repair for his entire life and had a shop,” Loeliger says. “Mark went through Sequoia Institute at the same time I did and we graduated from high school together. When I left to go wrench, Mark went to go manage his dad’s shop. Ultimately, Mark was also looking for a change and I was desperate to get out of the dealership, so we partnered up and started Devil Mountain Diesel in 2011.”

Jason and Mark are co-owners of the Walnut Creek, CA shop that’s focused on domestic diesel work and repair.

“We do bumper to bumper domestic diesel repair,” Loeliger says. “We started with just the two of us and we had a little, 2,500 sq.-ft. shop and we were that way for about two and a half years. Then we hired our first guy and added another two bays and were about 4,000 square feet. Then we moved about three years ago to a building with nine bays and about 7,000 square feet under one roof with an office and two advisors. Today we have seven employees.”

“I do all that stuff,” Loeliger says. “I just don’t do it with the volume that I do the Ford stuff. Six liters are kind of my calling card.”

As such, Devil Mountain Diesel recently finished a 6.0L Powerstroke overhaul for a customer who came to the shop a year ago for engine work.

“I looked at this truck the better part of a year ago, gave him an estimate and he couldn’t afford it,” he says. “He took his truck home and parked it in the side yard and saved up his money.”

The truck is a 2005 Ford with a 6.0L Powerstroke under the hood. According to Jason, these engines have some common documented failures.

“What you find with the bulk of the 6.0L failures that come in is the symptom from the customer will be white smoke out of the tailpipe,” he says. “That is the first time the customer is alerted that something is potentially wrong with their engine. They’ve probably had issues long since this point, but because of the Ford built-in parameters, the customer has no knowledge of some of these failures.

“An example is the temperature gauge on the dash. What’s been happening for a long time with this truck is that the oil temp has been hotter than it should be, but the truck from the factory did not monitor oil temperature. What happens is, the coolant temp is fine and has never moved on the gauge. It’s never gotten hot. But this whole time the oil temp has been hotter and hotter than it should be. That causes the ultimate failure of the EGR cooler due to expansion and contraction at a greater rate. When the EGR cooler fails, you get coolant into the combustion chamber and white smoke out the tailpipe. The customer knows I’ve got a problem and that’s how I got this truck.”

Since the customer had to delay his engine overhaul a full year, the truck sat at home, which meant coolant was doing some further damage.

“Once the EGR cooler failed, you’re pushing coolant into the combustion chamber,” Loeliger says. “You want to minimize that as much as possible. Obviously, that’s not good for a combustion engine. When you do that for a year, he’s had coolant, which is water-based, in the combustion chamber on the cylinder. What it does is it eats away the cylinder walls. When you take the heads off to do the head gaskets, you’ll see the cylinder walls are etched really badly and you lose ring seal. At that point it’s time for an overhaul.”

According to Jason, this scenario typically gets played out one of two ways; either guys fix the oil cooler and the EGR cooler because that’s all they can afford. Or you have guys who understand the amount of work that’s needed and agree to do an overhaul.

“This guy got put in that overhaul category due to the cylinder wall damage,” he says. “This customer was ready to do the job right. We’ll do a factory crankshaft, we’ll bore .020˝ over, do new pistons, new rings, new factory Ford rods, a factory cam, new Ford lifters, and all new bearings. We do new everything on the bottom end and then reseal the bottom end and flip it back over. We’ll do factory Ford head gaskets, ARP heads studs, Bullet Proof Diesel EGR cooler, Bullet Proof Diesel oil cooler, and away you go.”

According to Jason, the 2005 truck is the customer’s weekend warrior. The customer has a construction company and does a little light towing during the week and then on the weekend he likes to go camping, tows a fifth wheel, goes down to Pismo Beach, etc.

“At the dealership, I can do this repair in 24 hours of pay time,” Loeliger says. “I don’t rush anymore. It’s all about quality, not quantity. This job is a couple of weeks turnaround time with the machine shop. All the heads get sent to the machine shop for guides, seals and valve work. That takes a few days depending on his backlog. We tell the customer two weeks.”

With the overhaul complete, this 6.0L Powerstroke is as good as new again and ready for whatever the customer can throw at it.

“We try to put our money where our mouth is when it comes to these trucks,” Loeliger says. “We pride ourselves on quality and putting out the best product that’s possibly available.”