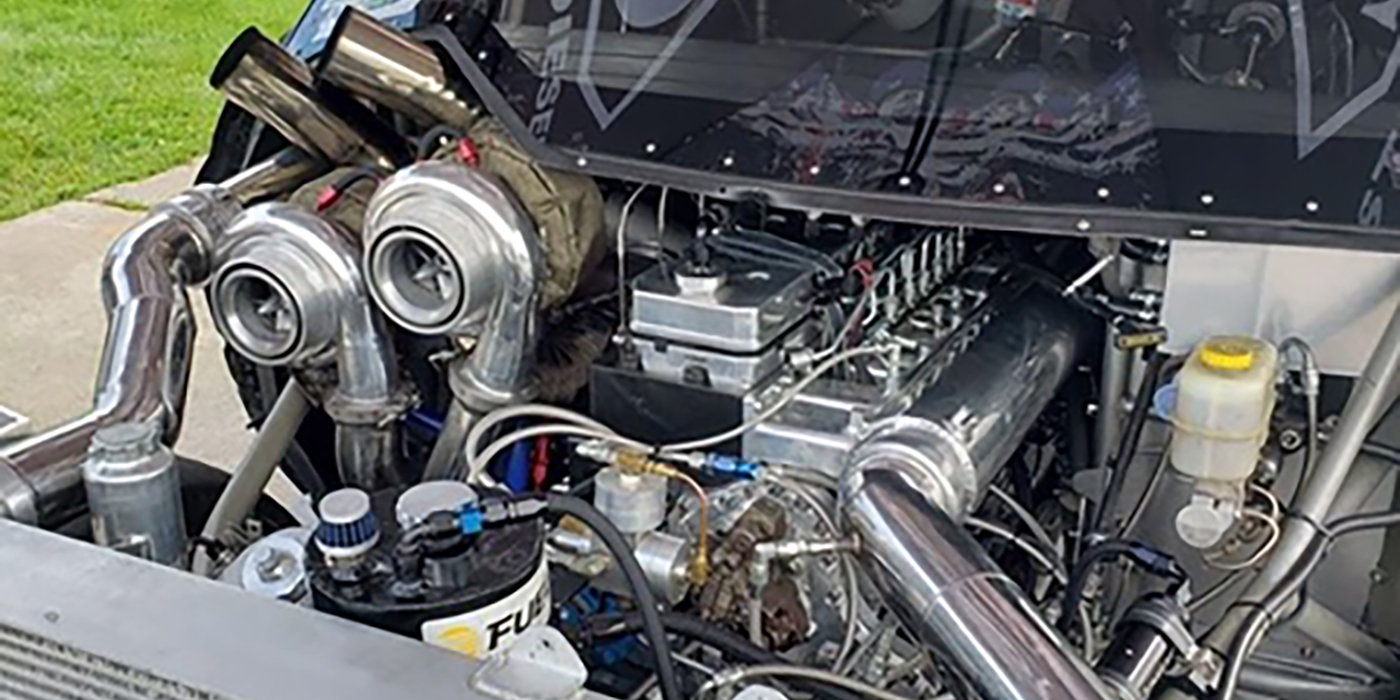 Since 2008, Pine Hill Diesel & Auto has been doing auto repair in the front of the shop and diesel performance out of the back of the shop. For the past seven years, owner Hunter Snyder has built Johnny Gilbert’s drag racing engine, which for the past few seasons has been this deck-plated 6.7L triple turbo Cummins. Find out what goes into the build!

Inside the walls of Pine Hill Diesel & Auto, owner Hunter Snyder does plenty of automotive and diesel repair work, as well as performance engine work for the likes of Johnny Gilbert, Justin Ziegler, Dustin Beheler, Calvin Logan, Greg Young, and many others. Hunter’s love for engine work stems from his childhood years growing up on a farm.

“I worked on semis and stuff when I was about 15, and it just took off from there,” Snyder says. “I worked for a good friend of mine who I grew up with. His dad had a trucking outfit with eight or 10 trucks and I worked there through high school.”

Hunter’s passion for the industry brought him to Canton, OH where he worked at Western Branch Diesel on Detroit Diesels. “I worked there for 11 years,” he says. “Then I started a shop down here at my house in April 2008. That’s when we started Pine Hill. We’ve been here ever since.”

“I would spend evenings and weekends messing around in the garage,” he says. “Today, the shop is 4,500 sq.-ft. We do a lot of repair – anything from brakes on a Honda Civic to putting a head on a 6.7L Cummins – that’s the front side of the shop. In the back of the shop, we do the performance stuff. We’ve got a 3,000 horse Land & Sea dyno and a Haas CNC mill back there. We make what we can’t buy and just try and control everything we can in-house. We do pretty much everything in-house, however, I’ve got outside machine shops I use for certain things. I can do that machine work in-house, but I’ll use those other shops from time to time because I’m so busy with other stuff.”

Part of that busy work are the 11 performance engines Pine Hill will work on this year. “We’ve done five of them so far, but have 11 total to do,” he says. The performance work is strictly Cummins engines, but the repair side is mostly Cummins and Fords. “I don’t mess with Duramax. I’m not a big Duramax guy,” Snyder admits.

With three full-time employees, Pine Hill keeps plenty busy, and one customer in particular has been bringing engines to Pine Hill for roughly seven years. That customer is Stainless Diesel owner Johnny Gilbert.

“I’ve done Johnny’s motor for about the last seven years,” Snyder says. “We just did his deck plated 6.7L Cummins. This particular engine has been around for about three years. The Cummins block has a Wagler head on it. It’s our deck plate bottom end. I bored it, sleeved it, machined it, etc. The engine has a 6.7L crank, a Hamilton camshaft, a set of Mahle H series bearings with our dry film coating on it called DFL (dry film lube), Carrillo rods, Diamond pistons and Power Bore sleeves.”