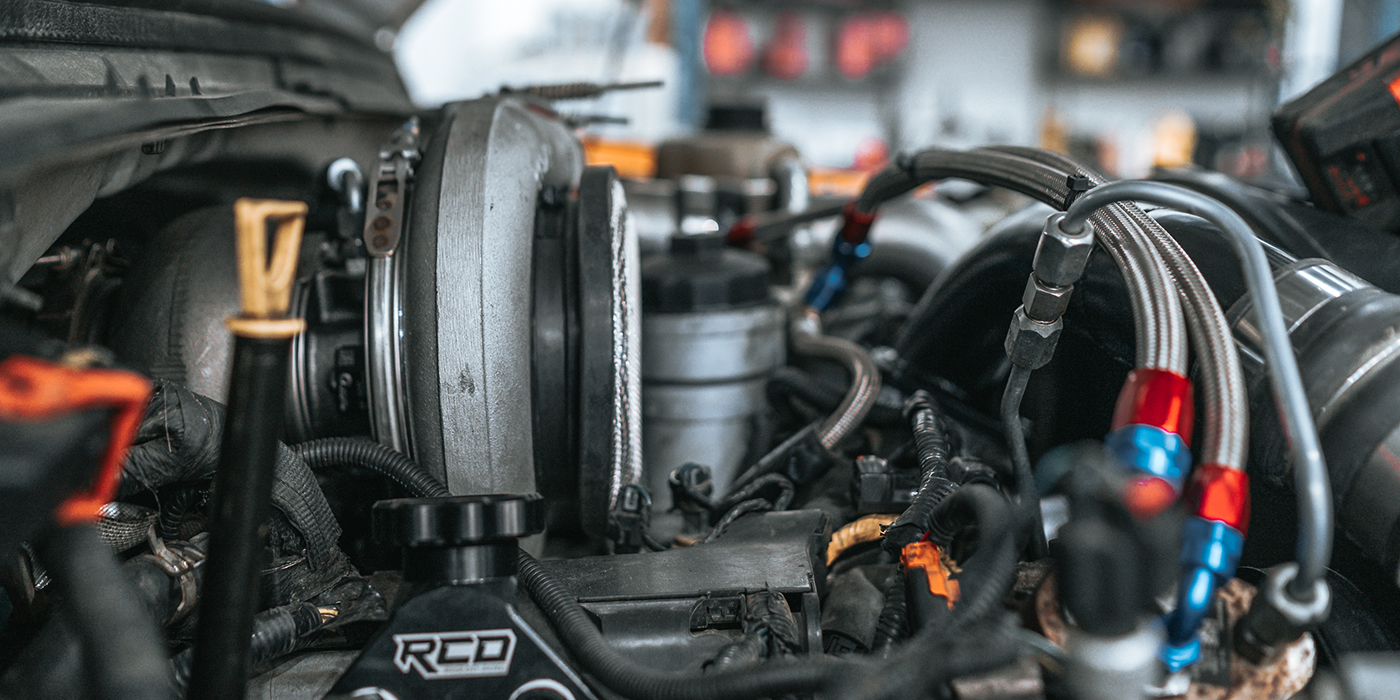 When a customer brought in a 2008 Ford F350 for a rebuild, Jordan Powell and the team at Dirty Diesel Customs was happy to help. However, halfway through the build, the customer hit financial issues and had to get out of the truck, so the shop bought it from him and turned it into a drag truck. Find out what went into this 6.4L Powerstroke rebuild!

When you give a call to Dirty Diesel Customs in West Kelowna, British Columbia, Canada, you’ll be greeted by an employee, of course. However, the real fun begins when you get placed on hold. That’s right.

Instead of expecting to hear outdated elevator music, random dial tones, ‘your call is important to us’ announcements, a robotic woman’s voice telling you you’re third in line, or nothing at all, Dirty Diesel Customs uses a call waiting track unlike any other.

According to owner Jordan Powell, the track was recorded by one of his good friends, and you’ll just need to call the shop yourself to find out why it’s so great! (778-754-7090)

“That’s just a buddy of mine who’s just hilarious,” Powell says. “We got him to spout off for 10 minutes or something and just recorded it.”

Powell started Dirty Diesel Customs in 2011, several years after having been hooked on diesel performance and diesel power when he bought a 12-valve Dodge back in 2005.

“I was a field mechanic and I used to build natural gas compressor engines,” Powell says. “In 2011, we started up the shop as a side business. The diesel stuff was just a fun thing to do on the side as a cheap way of getting truck parts, basically. The phone started ringing and just kept ringing.”

From there, Powell opened a little 1,200 square-foot shop, and before long he had to quit his other job because business was getting too busy.

“I ended up hiring in one guy and then getting a bigger shop, then two guys, and now, here we are with 10,000 square feet, six techs, a shipping department, and all sorts of stuff,” he says.

Between Dirty Diesel Customs’ first shop and the 10,000 sq.-ft. shop they’re in now, Powell had a 2,500 sq.-ft. shop in Alberta – one province over – before moving back to British Columbia.

“It had always been my plan to move back to BC where we are now because it’s where I grew up,” Powell says. “We moved back over and basically started from scratch again clientele-wise and moved into a 3,000 square-foot shop. Things really took off and after a couple years we moved up the road to the current shop we’re in now.”

Dirty Diesel Customs has 11 employees and has always been focused on Ford Powerstroke and Ford powertrain work. With Jordan’s engine building background, the shop proudly builds its engines in-house.

“I’ve bought a couple from other engine companies and they were good, but I was never fully satisfied,” he says. “We started doing our own engines in-house and now we do everything, but mostly Ford stuff. We don’t have a machine shop, so we just get it machined locally and then assemble everything in-house here, and we do all the installs. We’ve got six bays and a chassis dyno. We build everything from stock cabin chassis truck engines to full drag truck engines.”

In addition to the work the shop does, Dirty Diesel Customs also has an online store where people can buy parts.

“We had always had an online store, but it never really did what I wanted it to do,” he says. “I hired Josh a few years ago, and he came in and totally revamped our online store. Now, half, if not more of our business is shipping stuff out.”

While Powell is typically busy with customer truck and engine work, the shop also has its own drag truck, which features a 2008 6.4L Powerstroke, which got rebuilt for better performance.

“It’s a 2008 Ford F350,” Powell says. “It was actually a customer’s truck that we’d built for him and got running, but he decided to get out of it. We’d only done the top end to it, like added big turbos, big injectors and did the heads, and then he got into some financial trouble, so we acquired the truck and bought the truck off him.”

As soon as the 6.4L Powerstroke was his, Powell decided it needed a full overhaul, so he pulled the engine out, stripped it down and got busy building it back up.

“The engine was bored .030˝ over,” he says. “It got line bored and balanced. The heads are also ported. That’s our bottleneck on the 6.4 is the head flow. There are aftermarket companies coming out now with heads that flow a lot better, but that’s where we always struggle compared to the Duramax and the Cummins guys.

“It’s got ported heads with valves, springs and pushrods upgraded, all from Elite Diesel out of Colorado. “We also put some coated, fly-cut pistons in there with a different bowl design from River City Diesel. It has a big camshaft from Colt Cams. The head studs are A1 Technology and the main studs are ARP.

“We have injectors in it from Elite Diesel and we’ve got their twin injection pumps on it. It’s a twin K16-style injection pump. We just switched the engine over to a River City Diesel turbo kit that’s got a single BorgWarner SXE 476, so a 76mm charger.

“We also did custom made piping and stuff to the Spearco intercooler. The low-pressure fuel system is built from Elite Diesel as well.”

Since the bottom end of the 6.4Ls are built pretty tough, Powell decided to keep the stock crank and stock rods.

“We’re just going to go until they break,” he says. “They’ve got a split bedplate design for the mains, so the crank and everything holds up really well in those trucks.”

The 6.4L Powerstroke is hooked up to a custom-built SunCoast Diesel transmission and is being used in a drag truck application for both 1/8th-mile and 1/4-mile races. The engine even features a bit of nitrous to help it get down the track.

“We also have 300 horse-worth of nitrous we throw at it. We have a ZEX nitrous kit with a purge and a two-stage shot of nitrous. The engine sits around 1,200 horse with 2,300 ft.-lbs. of torque. The engine seems to run pretty stout,” Powell admits. “We just want to lighten the truck up, so we’re talking about back halfin’ it or just building a fiberglass truck and swapping that engine into it, which would be my ultimate goal. We’ll see how things go in the future.”