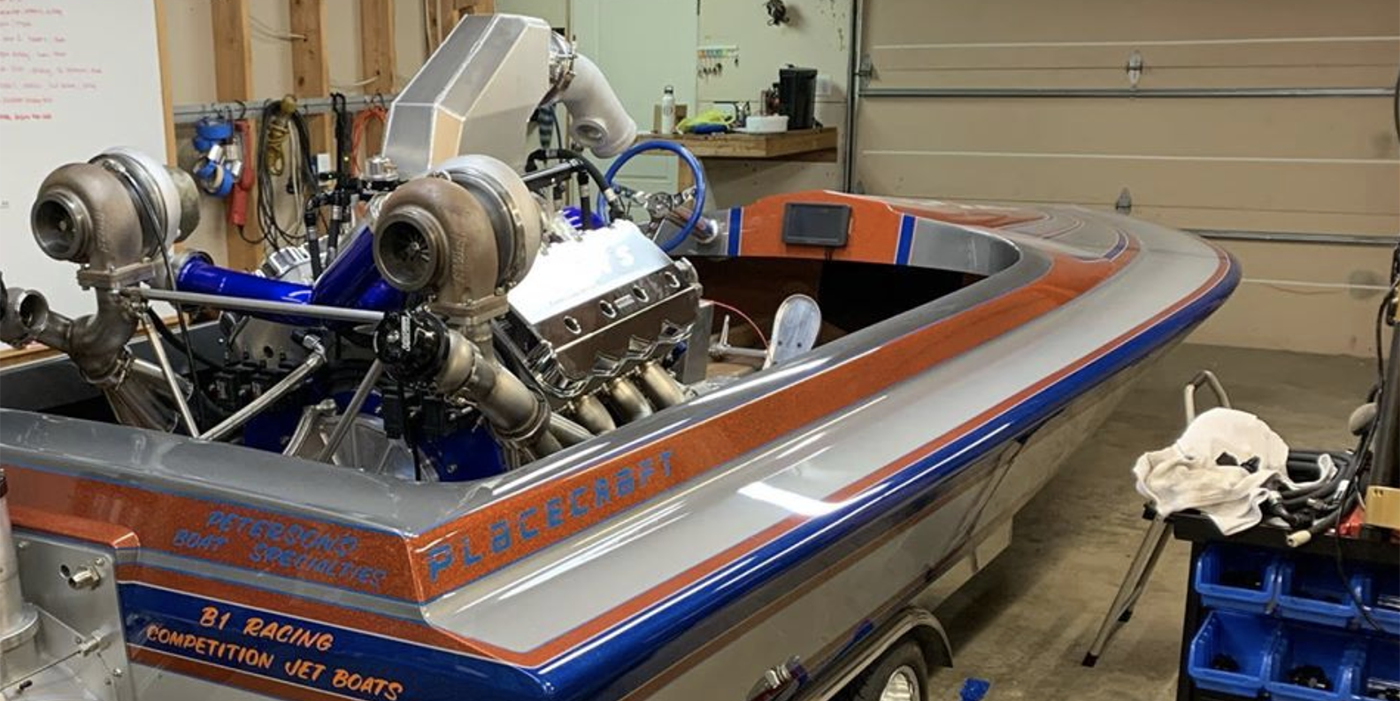 Mike Finnegan grew up riding around in the backseat of a jet boat, inches away from a 455 Olds engine. As a child, he thought his parents wanted to kill him. It’s tough to blame him! Going 150 mph in a 19-ft. boat is pretty insane. Mike Finnegan admits, that amount of speed in a boat on the water with no windshield, feels like you’re going to the moon. He fell in love with drag boat racing and recently built this 711 cid twin-turbo Hemi engine in a 19-ft. Peterson Place Craft. Find out what went into the build! Engine of the Week is sponsored by PennGrade Motor Oil and Elring – Das Original.

Going 150 mph in a 19-ft. boat might sound insane to most folks… and it is. If you ask Mike Finnegan what it’s like, he admits, that amount of speed “in a boat on the water with no windshield, feels like you’re going to the moon.” That’s coming from a guy who is well-initiated with the jet boat/drag boat racing scene.

Obviously, Mike survived, and with a 455 Olds next to him throughout his childhood, Mike learned to love the roar of a V8 engine. This influenced him to get into racing jet boats as he got older and the love for engines, cars and boats has remained to this day.

“When I got into automotive publishing, one of my first assignments was to go to Westech Performance in Mira Loma, California and write a story on Steve Brule, the gentleman who runs the place,” Finnegan says. “He raced drag boats at the time, and when I walked into Westech, his drag boat was sitting in there and I thought that was the coolest thing I’d ever seen. He invited me out to go racing with him and I’ve been broke ever since thanks to him.”

Today, Mike runs Finnegan Speed & Marine, as well as hosts popular YouTube channels like Finnegan’s Garage and Roadkill. He is also a long-time staff member at Motor Trend and The Enthusiast Network writing for publications such as Hot Rod magazine.

Above all else, when it comes to creating horsepower, Mike loves being in boats best. That’s why he has been building a new jet boat set up – a 19-ft. Peterson Place Craft called Game Over with a 711 cid twin-turbo Hemi engine in the back. We caught up with Mike to get all the details of the build.

As with any form of racing, drag boat racing takes some serious cash. With Mike’s career in publishing, affording to go racing meant learning to build a boat and engine himself.

“I couldn’t afford to pay anyone to build a race motor,” Finnegan says. “I learned everything the hard way. I had some really great mentors who taught me. I blew up a lot of stuff too. I was able to, through jet boats, build engines that were ridiculously powerful that I could never truly enjoy on the street and just beat the snot out of them and learn about them and break them in jet boats on lakes and rivers that had no speed limits.

“For me, that was the beauty of the jet boat. It didn’t matter what I built, I could stick it in a jet boat and go find out what happens. I’ve been doing that my whole adult life and it’s culminated with this most recent build, which is fairly ridiculous and useless and not legal for any kind of modern jet boat racing, but I always wanted to build a twin turbo kit myself and further my EFI learning. Building this new boat allowed me to improve my fabrication skills and learn a whole bunch of new skills.”

Finnegan had reached the limits of his prior boat and engine, which was a standard bore space, aluminum, big block Chevy that made about 1,600 horsepower with a single stage of nitrous. For his new boat, he wanted to see what turbos could do, so he got to work building out the new combination.

“I knew I didn’t want to stick with a 4.840˝ bore space block because it was starting to move around,” he says. “I thought, all right, I’ll go to a 5.000˝ bore space deal, because that’ll give me more meat between the cylinders and maybe it’ll handle the extra cylinder pressure a little better. I went to Mike Moran (of Moran Motorsports), and Mike Moran helped me bench race the combo and picked the stroke I was going to run. I told him what I was interested in was not a big power number, but I wanted something that would spool really fast and I wanted to go 1/8th-mile racing. I just wanted to spool instantly and build boost quickly.”

“The head dictated I needed a 4.700˝ bore and before I knew it, the engine had grown to 711 cubic inches,” Finnegan says. “The power capability of that is more than I need to do what I want to do, but the parts I had kind of dictated that’s how big the engine was going to be.”

Sonny Leonard’s shop assembled the long block and dynoed the engine naturally aspirated on pump gas. It made 1,275 horsepower. From there, Finnegan fabricated his own stainless steel turbo system and cold side piping and stuck two Precision turbos on it.

“We’re running two Precision turbo 66mm blow off valves and Precision wastegates,” Finnegan says. “The intake elbow is an aluminum deal that a friend of mine fabricated and welded together. Ignition is all controlled by a Holley Dominator. It runs everything – the EFI, the data logging and the ignition system. Right now, I’m running it on Rocket Racing 118 octane leaded fuel with a giant intercooler from Precision.

“We basically have an unlimited supply of fresh cold lake water because it’s a boat, so the jet drive is feeding the intercooler. The intercooler heats the water up a little bit and then it goes in through the front of the block and then dumps overboard out the back of the cylinder heads.”

Since getting the 711 cid twin-turbo Hemi engine completed, Coronavirus has squashed any opportunity to get the engine back on the dyno for further tuning, so Mike has been tuning it using the Holley Dominator EFI while out on the lake.

“I go out there and drive it a little bit, log it, stare at the air/fuel numbers and the EGTs and make changes and go drive it again,” he says. “It’ll take a lot longer to refine it that way and make it safe to go wide open throttle, but we’ll get there eventually.

“I’m currently running it with 6-lb. springs in the wastegates. I have a CO2 system onboard the boat to the increase the pressure on the wastegates if I want, but we’re a long way from that. I’d say conservatively at 6-lbs. of boost, it’s probably making 1,600 horsepower right now. We could turn it up and do a lot of things to make a lot more power than that. I’d be comfortable running it right around 2,000 horsepower.”

While Mike was building the Hemi engine, he was also outfitting his new boat hull – a Peterson Place Craft – from Peterson Boat Specialties in Lake Havasu City, AZ. The hull is 19 ft., 6-inches long and weighs 420 lbs.

The hull came empty, so every scrap of aluminum in the boat used to mount anything was fabricated in Finnegan’s home garage, except for a couple of pieces bought from B1 Racing in Santa Ana, CA. They made the steering system, the billet gas pedal and the dominator jet drive.

“The jet drive is what powers the boat,” he says. “The engine is direct drive to the jet drive. There’s a short aluminum drive shaft – there’s no transmission.”

With the engine’s steel rods, Finnegan expects the 711 cid Hemi engine should be good for at least two seasons before he’ll need to do any serious refresh work.

“I would be constantly leaking it down, constantly checking valve lash, constantly looking for lifters going away,” he says. “I would take the lifters out every season and look at them, but the bottom end would stay together for a pretty long time.”

For now, Mike is focused on getting his new jet boat out on the water for some fast fun! Jet boat racing, in many ways, is similar to car racing, according to Mike.

“It’s broken down by what propulsion you have – whether it’s a v-drive or a jet – and what style hull you have, what displacement engine you have and then whether you have a power adder or not,” he says.

While the objective of drag boat racing is the same as drag racing cars, that’s where the similarities end. Drag boats don’t have brakes and most of them don’t have transmissions, so the starting line procedure is very different from automotive.

“We race a quarter of a mile, but before the traps there’s about a 75-100 foot run up to the timing traps where they begin,” Finnigan says. “That is to pair the boats up. You basically start the drag boat race sitting there holding onto a rope that’s stretched across the lake or river. There’s two lanes and a pontoon in between both lanes with a guy with a pulley system sitting on the barge. He’s the starter.

“Each racer gives a thumbs up that they are ready and the starter will lift the rope up. You’re idling and holding onto that rope to keep the boat from moving. They give you about 30 seconds to warm your motor and directly above the Christmas tree you have a clock that counts down either from 30 seconds or 10 seconds to zero. Your job as the driver is to time how long it’s going to take you to let go of that rope, mash the gas pedal and get to the timing beams. The goal is to get there at zero when the lights go green.

“I think it’s as hard to do as hitting a 100-mph fast ball from a big-league pitcher. If you’re too early, you red light just as in car racing. If you’re too late, you’re probably going to lose the race. If you’re good at it, it’s a really, really good skill to have and you’ll win a lot of races right there at the starting line.”

You could say it’s ‘Game Over’ if you’re racing against Mike and his new jet boat! You can follow along with Mike’s boating adventures, and many other projects, on his YouTube.