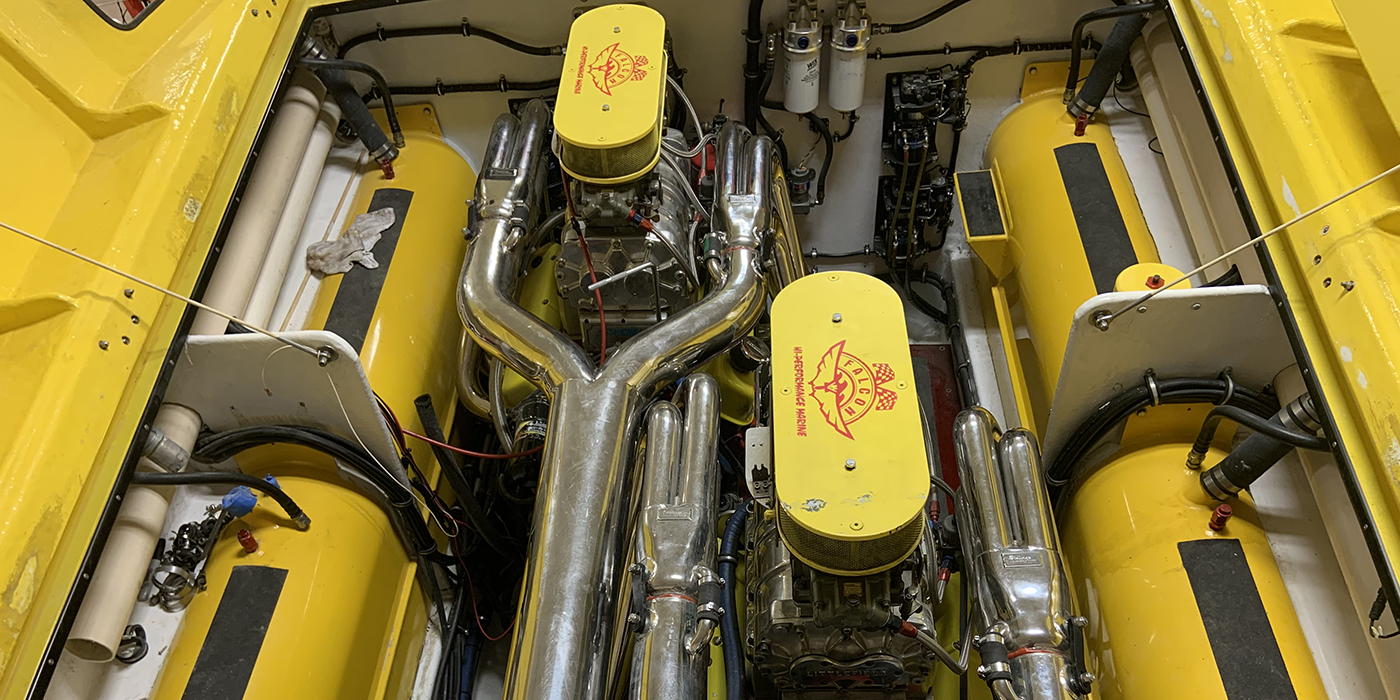 According to Bob Teague of Teague Custom Marine, the installation is just as important as the engine build itself.

Boats are big; some are so big that they can’t be towed easily without a tractor-trailer and a “wide load” sign. That said, there are many pleasure boats and race boats that are within the range of what could fit in a shop and be towed to your location.

The old myth about boats is that the two best days you have with them are the day you buy it and the day you sell it. While we certainly don’t subscribe to this theory, it is worth mentioning that boats require a lot of work and money to keep them going.

According to Bob Teague of Teague Custom Marine, the installation is just as important as the engine build itself. Teague says they do both the build and installs at his shop in Valencia, CA. The boat must be prepped correctly to handle the new engine, which may be a reasonably significant upgrade in power and a different configuration than the one that was removed.

“The environment is just as important as the engine, Teague explains. “You have to put the engine in the correct environment. If it’s not right, then the engine is going to fail.”

With five decades in the performance marine industry, Teague says he’s customized or worked on almost every make and model of high-performance powerboat in existence. Teague and his team have a vast amount of experience with rigging and installations that were gained by servicing ultra-custom v-drives, and they have backed up their knowhow with multiple offshore national and world championships.

Teague says they will install any part they sell or fabricate for retail customers in their 30,000 square-foot service facility. The TCM team draws on their wide inventory of parts and supplier relationships, as well as their in-house fabrication team to complete any rigging or installation tasks. From upgrading one component to the complete rigging and engine installation into a bare hull, Teague’s team can handle it all.

Bruce Baker of Express Engines says marine engines are about 60% of his business. He says they perform many installations with marine builds because, as others have pointed out, the environment is critical to get right. Baker says that he does all of the rigging himself, and he has two other employees that take care of most of the engine builds.

Express Engines is somewhat unique from other marine builders in that they build engines for multiple segments, including street rods and vintage cars. The shop is located 25 miles west of Daytona Beach in DeLand, FL, so they have pretty good access to marinas nearby as well as some private owners who live on the water. However, they build marine engines for a wide variety of clients from all over the map.

“Basically, I do marine engines worldwide,” Baker says. “I’ve built marine engines for customers as far away as Norway and England. We have a couple of teams in the U.K. and an outer limits team for which we reworked their 850 Mercurys. They won their most recent races, which are long, endurance-type events that are different from what we run in the U.S. They go 200 miles from the U.K. to the coast of Turkey and back; a little different than the American racing.

Running 200 miles on a boat wide open would be a challenge for any top builder, and it takes a different mindset to get them to last. “The big difference is the environment and the loads they must handle. You’ve got to use different gaskets, and you’ve got different cam profiles and so on,” Baker says.

The standard engine rotation is counterclockwise flywheel rotation. However, in some engine installations, such as v-drives, a reverse engine rotation is employed. It is important to use marine grade parts such as seals and gaskets for these applications. Some marine timing cover sets include all of the gaskets and seals for the engine. Reverse rotation timing cover seals and rear main seals are made of premium materials such as PTFE or fluoroelastomer, depending on the application.

“Many automotive shops that try to get into the marine market just don’t understand it,” Baker says. “You have to use Inconel exhaust valves and stuff like that to make things work versus automotive.

“I try to convert everything to a dry pipe or water crossovers at the end of the tailpipe. That way, you have no water intrusion in the exhaust system for high-performance use. Some guys who have to have the water in there, then we have to go with a different camshaft and set it up where we can run the wet exhaust. You have to stay off the duration; you can’t run much overlap.”

Mark Rinda of MER Racing says he does everything in-house. “I do everything from the machine work to taking the engines out and ordering all the parts. I put them in the boat and I prefer rigging the boats. I’m in good shape, but it’s a lot of work,” he says.

The installation side of the business is very time-consuming, according to Rinda. “You have to make sure the rigging and everything is right. And that’s a whole other part of it. Then, you have your water testing. You’ve got to do everything at the dock for tuning the engine for dockability and going out and doing your runs. Then, you have to do any fine-tuning, manually tuning on the laptop, after you come off the dyno. Carburetors are what they are, but with EFI, you have to do all that fine-tuning on the water or during a run if possible.

Rinda, who also races Pro Stock V, which is a single-engine 525 cid, says that most of the power will be brought out on the dyno, but after that, he looks for how the boat reacts on the water. “What I look at is how the boat’s reacting. What is it like coming up on plane. With the Holley EFI, we’re going to take off, but it’s not like a car, you’re under a full load. And then when you back out of the throttle, you still have the closed-loop learning going on until you turn that off.”

Rinda says he usually turns off the O2 sensors or removes them after he gets the engine tuned correctly. “You have a lot of tuning to do coming up on plane because you can get a false signal if you’re reading an O2 sensor in a boat with the way it is cammed. Even though you’re looking at numbers, you’re still kind of tuning it by ear and doing what the engine wants to do just from your experience.”

Tyler Crockett of Crockett Marine Engines has decades of marine experience and notes that when Mercury came out with their most recent 565 cid engine, they essentially just added another throttle body on top of the obsolete 525. “They basically borrowed that idea from what I did about six years ago,” he claims. “We do it in the front now because you lose a lot of hatch room if you stack the throttle bodies on top of each other. A lot of boats have minimal space when you put the hatch down, and then when you put the throttle bodies on top like that, it takes up too much room. What we did is machined out an opening in the front of the manifold and made it so you get the same amount of air in there, but you’re not adding to the height. You can fit it in the same compartment without making modifications to the boat hatch.”

Baker says his shop does many installs to complement their engine work. They even have a mobile shop to go out to customers’ homes or docks and do work.

“I do a fair amount of installs,” Baker says. “I have some older boats I’m currently working on, including a 2000 Fountain and 2006 Velocity. We have a lot of different stuff going on. So much that I had to rent another building because I’m out of space.”

Baker admits that installs can be quite challenging, depending on the condition of the boat. “It just depends on the boat. If it was done correctly, you’re just pulling it out, redoing the engine, and putting it back in. And then some are pretty rough, or you have to make a lot of upgrades.”

Some boats can be pretty nasty looking and get sprayed down, according to Baker. Then there are some boats in which he has to redo the plumbing and wiring. But the job typically begins because of an engine issue.

“Usually, the engines are bad when we get the job, and then we go into more detail from there if the boat needs more,” he says. “You may need to put in a new bilge pump, or it needs new hoses and so forth.”

Other boats may come back to Baker that have been run hard and need a full refresh. “I’m currently working on a boat that I built 13 years ago. It’s coming back in for a rebuild. I rigged it originally so I know it was done right, but it’s been run non-stop and not well maintained. We have to service the drive lines and the drives, the transmission as well as the engines, among other things.”

Whether marine installations are right for your shop depends on a variety of things such as whether you have enough space for a 25-40 foot boat or more? Do you have experience rigging boats, or can you hire people in your area to help?

The boat market, like racing and other recreational activities, depends on the economy and whether there’s enough business in your area to support it. It won’t be for most automotive engine builders if we are honest, but for some builders, it may be another revenue stream to add to the mix. EB

Advertisement
In this article:boats, Marine Engines