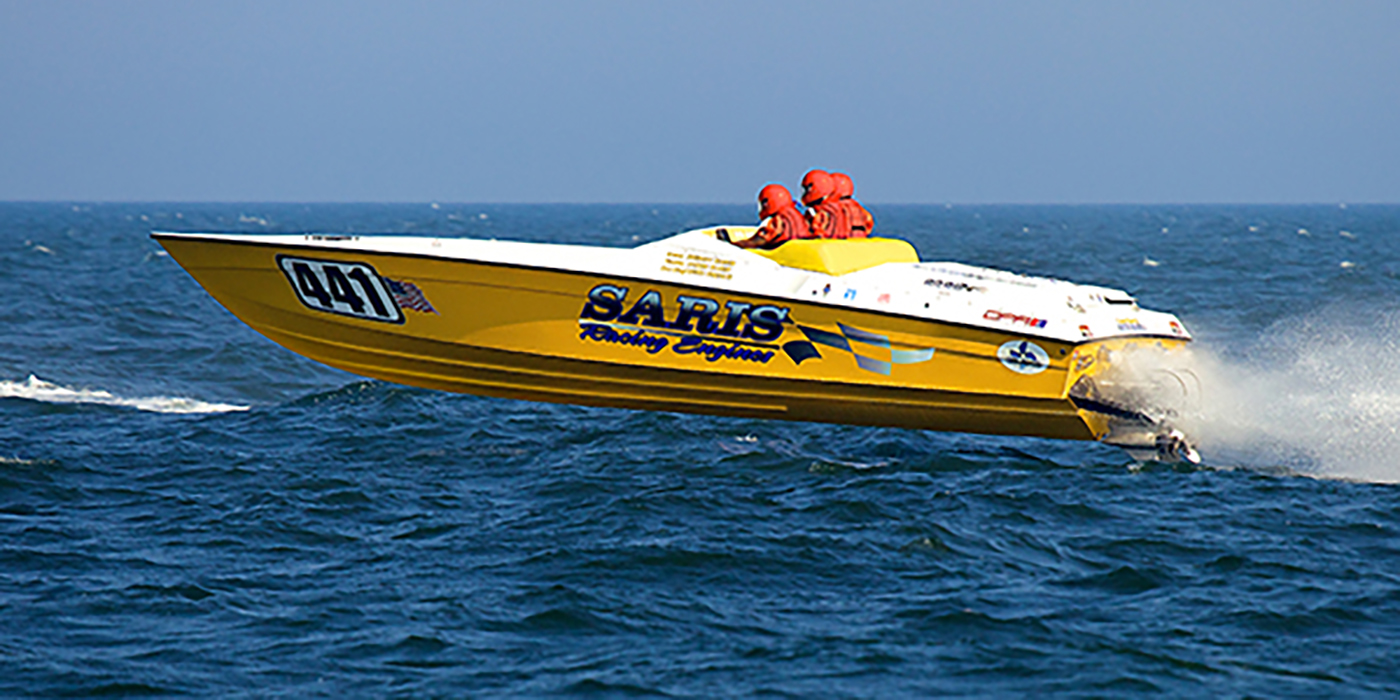 Lake George is a popular resort area in the Adirondacks, and during the 1970s, two friends, Jason Saris and Richard Gage, worked their way through high school and college at local marinas. Why? “Because they’re just a great place to work,” Saris says.

The work experience did more than provide a paycheck, it hooked them on the marine industry, and in 1981, after earning college degrees, Saris and Gage moved to Fort Lauderdale, FL, to build on their experience in a hot spot of boats and performance. Not only were they successful, but they started their own marine maintenance company and were awarded a contract with the U.S. Customs Department, maintaining the department’s high-speed drug intercept boats.

Saris started offshore racing in 1982, won the Modified National Championship the same year and there was no looking back. A business opportunity back home took both Saris and Gage back to Lake George in 1987, and Performance Marine was opened with their close friend and well-known boat racer, Jim DeNooyer. DeNooyer later sold his interest in the business back to Saris and Gage.

Today, Performance Marine is a full-service repair facility, which offers a number of standard boating services and also includes the company’s high-performance business, which begins with a number of engine packages from 525 hp up to 1,300 hp, known as Saris Racing Engines. Everything from engine blue printing and rebuilding to cylinder machining, porting and setup is done in-house in their fully equipped machine shop.

They specialize in forced induction and fuel injection, with two vertical mills, a lathe, cylinder head machining center, dynamometer and computerized air/fuel ratio equipment as just some of the equipment they use to offer state-of-the-art performance. Whether it’s racing engine development, custom rigging, fuel map development or carburetor setup and modification, Saris and Gage use their experience and their high-tech equipment to make it all happen.

Knowing there are a lot of similarities, but also a lot of differences between the worlds of automotive and marine engines, I had a lot of questions in my mind and started by asking Saris about what they frequently build.

“Big block Chevys are almost the entire marine performance world,” Saris says. He explained that building another type of engine is difficult and expensive because there are very few marine conversion parts available for other engines. An example is the durable and popular Mercruiser drive unit. Mercruiser makes all of the brackets and components to couple to a big block Chevy. “Other makes and engines are occasionally used,” he says. “But it’s not that common because the custom work can be very expensive. Everyone goes with a big block Chevy because that’s what everything is made to work with.”

Performance Marine uses Whipple Superchargers frequently for their builds. “Whipple has a really well-engineered marine unit,” Saris says. “Superchargers are a great way to go. They give you a big, broad torque curve and you can make a lot of power without having to use radical components. For a cam you can use a wide lobe separation, which makes the engine idle nicely.”

Just as we ask a lot of questions prior to building a car engine, Saris explained that they spend a lot of time with their customers prior to any performance work, so they have a thorough understanding of what their customer is looking for. In many cases, people have a misconception of building a marine performance engine. “I’ve seen guys build car motors and think they’ll work in a boat, but they don’t perform,” Saris says.

Horsepower is an important factor in building a marine engine for performance, but there is a bigger concern over durability and driveability. “If it’s a pleasure boat, they may have to go half a mile in a no wake zone and it better idle clean or the boat won’t make it,” he says. “And if there’s no bottom end, it won’t get up on plane. When it comes to offshore racing, it’s all a form of endurance racing. You are always making compromises, racing in an environment that you have no control over. It’s unlikely you will be able to take advantage of every last little bit of horsepower because of uncertain conditions.”

Another reason marine performance is so different, Saris explained, is because it’s like going uphill all the time, constantly overcoming resistance. At a standstill it’s like starting in fourth gear because there is no shifting. “It’s all about the right combination for what someone is doing.”

The most powerful engine they have built tipped the scales on the dyno at about 1,400 hp. Saris explained that they used a Whipple quad rotor supercharger, which is the equivalent of two superchargers on one plenum, and to make it even better, they put two of these engines on a 32-ft. skater, which ran just shy of 170 mph.

Saris is still racing, and his son Johnny has been racing with him since the age of 16. The Offshore Powerboat Association (OPA) is the sanctioning body in the Northeastern U.S., with racing events up and down the East Coast. Saris and his son race in class four (30- to 40-ft. V-bottom twin-engine boats) and have won four national championships and five world championships.

While racing and performance is the foundation of Performance Marine, Saris says the majority of their business is recreational and even though one might think it’s a seasonal business, there is no off season for them. They do their best to schedule maintenance and repairs for the months when no one is on the water, and during the summer months they focus on keeping people on the water.

For those whose destination for fun is Lake George, NY, no matter what type of marine performance they are looking for, they’ll find it at Performance Marine. EB

Advertisement
In this article:Marine Engines