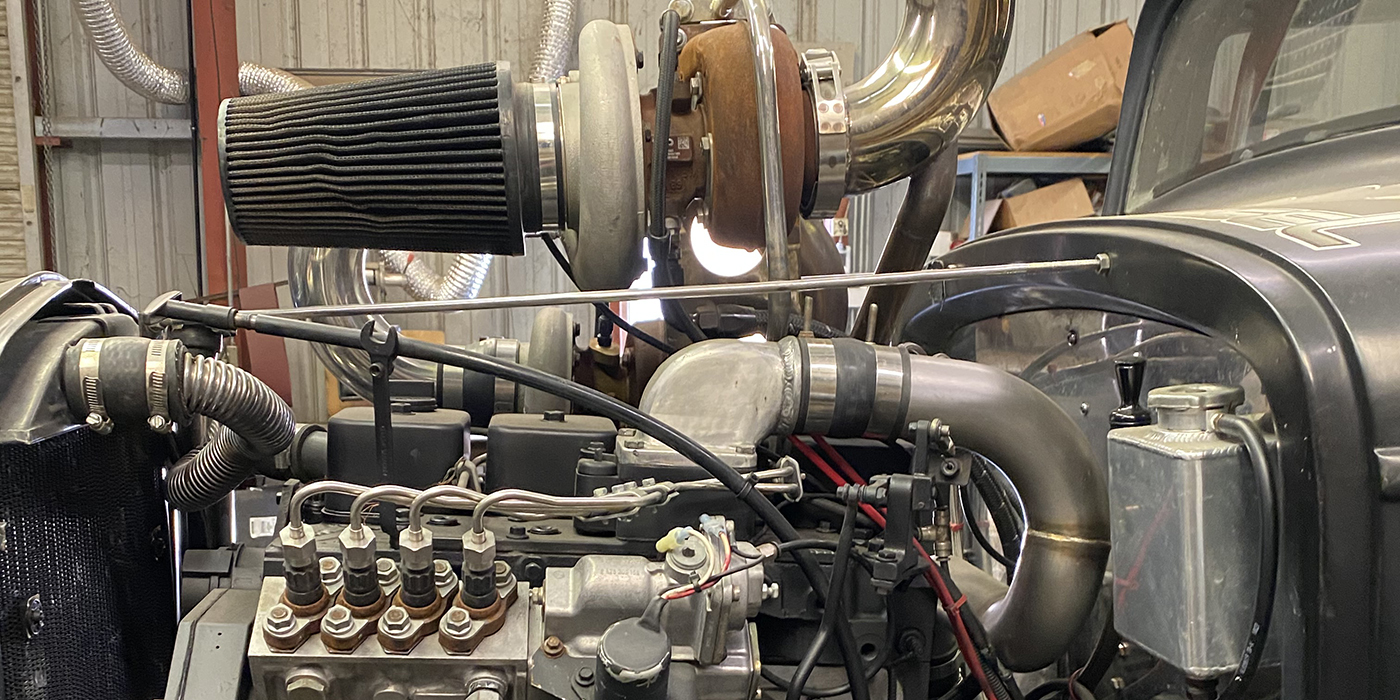 Trying to find a suitable replacement for his 406 cid engine in a ’32 Ford Coupe, Richard Brown of Brown’s Diesel was looking for horsepower and something economical to drive. He of course thought of diesel power and found the 4BT Cummins to be a perfect fit. Find out what went into the build!

Looking to buy cheap parts for his ’29 Oldsmobile hot rod, Richard Brown’s foray into this industry began by attending swap meets to gain horsepower without breaking the bank. It was around this same time that Richard began to notice the 12-valve Cummins engine. He saw it had a good reputation in the industry, but it didn’t make much power from an automotive standpoint. He quickly discovered the stock horsepower could be manipulated without too much money, and another diesel junkie was born.

“I didn’t have the money to buy the expensive parts, so I was always trying to get the most horsepower with the least amount of money,” Brown says. “When you could add 100 horsepower with almost no money, I just thought that was awesome, so I started hopping up trucks.”

It was then that Richard learned of Pierce Harry, a diesel fanatic in Canada and a former BD Diesel employee who started his own shop selling parts.

“He was instrumental in getting a lot of people set up,” Brown says. “If you bought three parts at a time, you would get dealer pricing, so everybody was picking his brain and getting parts cheap. That’s when my business started.

“I liked the increase in power with little money and I started buying some parts and I’d buy in quantity and then I had to sell them. We got a little bite of the power bug and then we had to make more power and we started trying different turbos and then adding more fuel and larger injectors, etc.

“At this time, the whole dyno craze was also happening. I was number one in the dyno power spotlight for a while. We learned how to fix vehicles because things would break from adding power, so we had to find what might break and what’s going to fix it and make it better and stronger.”

Richard started Brown’s Diesel officially in June 2003. He started the shop by working on Cummins engines because he liked the inline six for its strong crank and rods, and the fact that you could add roughly 1,000 horsepower to the long block without doing any major engine work.

“I just liked the platform all together,” he says. “Since then, we’ve moved along. We now work on Duramax and Powerstrokes too.”

Brown’s Diesel is located in Riverdale, CA inside a 9,800 sq.-ft. facility with nine full-time employees. And if you were to ask Richard his favorite diesel engine, he’d tell you it is the Powerstroke because they make him the most amount of money. However, for making power, he likes the Cummins platform best.

In fact, Richard has a ’32 Ford three-window coupe that features a 4-cylinder Cummins engine that he loves to show off because it is a bit unique in comparison to the typical 5.9L or 6.7L Cummins you normally hear about.

“I like talking about the 4-cylinder because not too many people work on it, and it’s a motor that people are plugging into different vehicles such as Jeeps, Broncos and hot rods,” he says. “People think it’s a 12-valve and it’s not. It’s a motor all its own. All the parts are interchangeable, but the way that it works is totally different.”

Richard’s ’32 Ford initially had a 406 cid engine under the hood. Running on alcohol and an 8-71 blower, it made nearly 850 horsepower, but it wasn’t economical to drive. He began looking for alternative engines to build in its place.

“I wanted to go diesel,” Brown says. “I had bought a bunch of motors that came out through LKQ. They came with an inline pump, which has more ability of making power and also lasts longer, so it’s very desirable to get the inline pump. I had these motors sitting around.”

“That little 4-cylinder fit into the chassis perfect,” he says. “It’s a 239 cid 3.9L engine. We put the motor in and changed the pump, added injectors, added turbos, and put a new cam in.”

This 4-cylinder Cummins has D&J billet pistons with a stainless-steel fire ring. Brown’s Diesel is using billet Carrillo rods, a Hamilton camshaft, ARP 625 studs, a Gorilla girdle to stiffen it up, and a 13mm pump and massive injectors from Scheid Diesel. The engine also has twin turbos – a 57mm S200 as a small turbo and a 69mm SXE as the large turbo, both from BorgWarner.

“They spool nicely and they move a lot of air,” Brown says. “We also have a custom intercooler. We’re making around 75 lbs. of boost. What we are stuck on right now is a head design. I don’t believe anybody has any cylinder heads out there for the 4-cylinder and it’s limited our power to 740 hp at the wheels. We just have a hard time getting over that hump, and that was with nitrous and twin turbos.

“Twin turbos make a huge difference on a 4-cylinder. It really makes them wake up. We’ve also had issues with vibration. We’ve tried different things and some of it’s helped. You just have to learn what makes these 4-cylinders work. They’re a little bit temperamental, but they make a lot of power and they fit in a lot of different applications and get awesome mileage. The biggest thing is getting the air figured out.”

That’s a pretty quick 4-cylinder diesel engine any way you slice it, and Brown’s Diesel will be looking to improve it even more!

Advertisement
In this article:AMSOIL, Cummins, diesel, Diesel of the Week