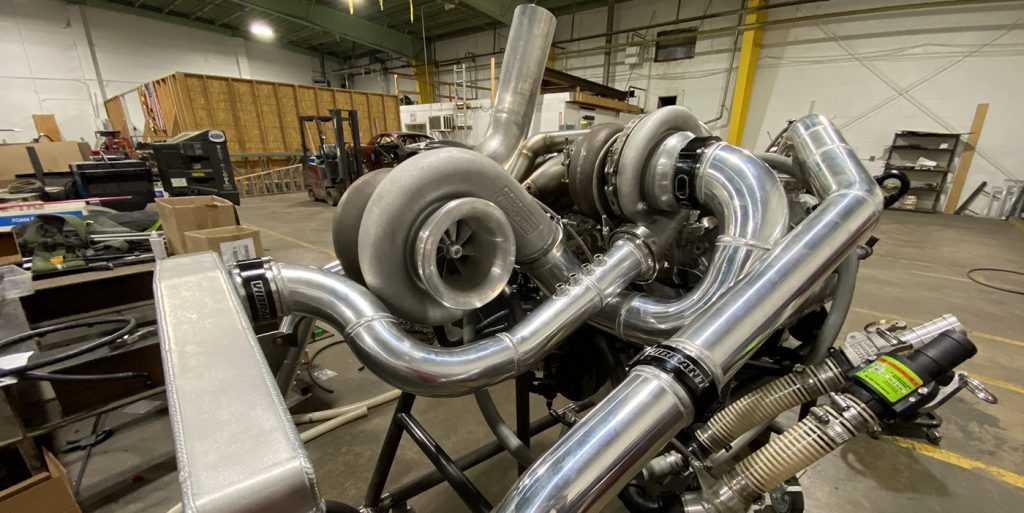 Maryland Performance Diesel was founded in 2007 by Craig Briggs, Jr. The shop’s bread and butter are the 6.0L, 6.4L, and 6.7L Powerstroke platforms. Anything from mild to wild comes out of the 37,000 sq.-ft., Linthicum Heights, MD-based shop. In fact, in the past decade-plus, Maryland Performance Diesel (MPD) has developed and fabricated new products to enhance power and performance, all while changing the diesel industry through innovation and creativity.

“We have pushed the same platforms to the edge of their capabilities, and then pushed even farther!” Craig Briggs Jr. says. “We continue to push the envelope and strive to always be the unquestionable leader in Powerstroke performance.”

Continually advancing the technologies the shop uses in-house for developing, testing and manufacturing components keeps MPD at the forefront of what is possible. We recently caught up with MPD sales manager Josh Sargent to discuss what the diesel shop has been up to recently, as well as the details of a new 6.7L Powerstroke build.

Josh has been in the diesel industry for seven years now, having worked at several different shops, including time at Alligator Performance, before coming to MPD nearly four and a half years ago.

“I was hired on to be a salesman and now I’m the sales manager,” Sargent says. “I handle all the customers – from little to big builds and race truck builds. Powerstrokes are our bread and butter. They always kind of have been. We started off in the 6.0L game before there was a big 6.0L game.”

MPD has roughly 20 employees and does everything from general repair and maintenance work to full engine builds and machining, as well as manufacturing diesel products.

“We started manufacturing our own parts and that grew into its own thing,” Sargent says. “Right now, the 6.7L platform is our bread and butter more than anything else. I would say it’s probably 5 to 1 in favor of 6.7L builds compared to 6.0L and 6.4L stuff. It’s a bigger platform and it’s the most popular platform out there now. I would say as far as manufacturing is concerned at least 95% of it is Powerstroke related, and probably 65 to 70% of that is 6.7L specific.”

With all of these capabilities, it’s no surprise that MPD does everything in-house. All of its machining, water jetting, 3- ,4- and 5-axis CNC work, engine builds, transmission builds, and more are done by MPD itself.

“We have two full-time engineers. Five or six machinists. We run a daytime shift and a night time shift for all the CNC machines and the water jet. We have four or five full-time fabricators. Then we’ve got a couple of guys who do R&D and fabrications for new products and projects,” he says.

If all of that wasn’t enough, MPD also started a new sister company at the end of 2019 called Redemption Performance Solutions, which is focused on gas performance – mainly Ford Coyote mod motors and the new 7.3L gas engine platform in the Super Duties.

“This engine has a whole bunch of one-off stuff,” Sargent says. “It’s got our billet front and rear engine covers. It’s got an S&S front-mount, gear-driven, 14mm CP3. It also has a belt-driven, external wet sump oil pump that has a custom-billet oil pan as well. The heads are factory-based heads with some pretty aggressive port and polish work down on them and some nice valvetrain parts.”

“This truck is going to be specific for drag racing,” he says. “We do both the 1/8th-mile and 1/4-mile, but it’ll be 1/8th-mile stuff primarily. I don’t know exactly what horsepower the engine is going to make, but air and fuel wise, there’s enough for 2,500-plus horsepower. What we’re not entirely sure of is how much the actual engine itself is going to hold. I think the biggest concern for us at this point is going to be the block.

And that’s certainly nothing to sneeze at!