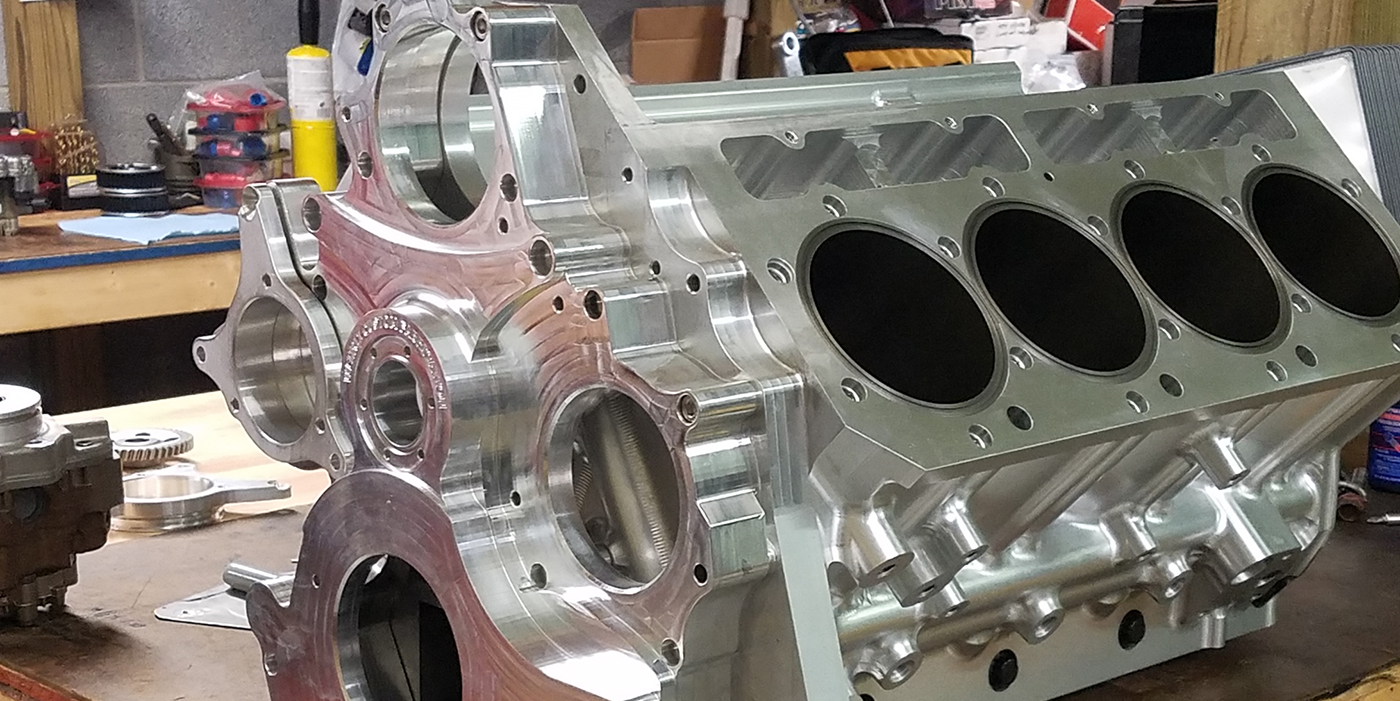 With diesel cylinder blocks, unlike gasoline blocks that may only deal with 25-35 pounds of pressure, diesel can be as much as 250 psi. The block is crucial to keeping everything together.

For many diesel engine builders, stock blocks are what you have to work with and, in most cases, will need little modification to handle a high power build up to a point. However, engine builders that we spoke to say that anything over 1,500 hp with a stock block can be trouble.

Ron Knock of Diesel Motorsports, who runs a drag racing series dedicated to diesel truck racers, says most of the stock components are overbuilt enough to handle “some” extra power. But how much is too much?

Jared Alderson of Kill Devil Diesel recently built a 6.0L Powerstrokewith a stock block that he says could “split the cylinder walls” at 1,500-1,800 hp, so they partially filled the water jackets and installed ductile iron sleeves to shore things up. He says building an engine with that kind of power puts a lot of stress on the block and other parts. “It’s really hard on parts when you make 2,500 ft.-lbs. of torque at 2,100 rpm, so we detuned some of the torque and the cylinder pressure down low and raised the power levels higher into the rpm range where you change the stress from the bottom end to the top end in the valvetrain.”

The 6.0L engine build also included a Total Seal ring package that Alderson says works well with the ductile iron sleeves. And they also installed their special Kill Devil Diesel o-ring gasket kit, which is a double o-ring; one in the block and one in the head to keep everything sealed and in place with help from ARP 625 series head studs.

The stock cylinder blocks from Cummins are the most durable, according to Knock, which he claims can withstand more than a 30 percent increase in power and torque. Duramax and Powerstroke blocks, on the other hand, can only handle a little extra power at about 13 percent more (with stock internals), which he says is mostly due to the V-configuration.

“For years, the king of the hill in diesel performance was the Dodge Cummins,” Knock claims. “It may have changed a little, but not a whole lot. A Dodge Cummins engine/block can handle almost a 36% power increase before you start breaking internal parts. And they are fairly stout anyway with 400-450 hp, so a 30%-plus increase is pretty good. With the Duramax, the newer ones are a little freakier because of the electronics, so you can’t touch them at all. They have three separate chips in them now. If you screw with one, then the others will default out.”

Rich Strube of Richies Diesel Performance says that most of the engines he works on now are Duramax, but he builds all of them, including the Powerstroke. “I’m so overwhelmed right now with the Duramax stuff. I’m working on my fifth build this year. And I just signed to build a sixth. So I have my hands full with them, but that’s what I like. I would say [Duramax] is probably 85% of my workload. People come to me from all over the East Coast for the Duramax. And the Ford [Powerstroke}; it’s like there’s nobody else to go to around here. They just come to me by default. I’ll do a single turbo upgrade and install a Stage 3 kit in the 6.7L Powerstroke because the stock turbo tends to fail.”

Most of RDP’s builds are under 1,250 hp, so the stock block is sufficient enough to handle the power load. However, he says that on the Duramax, even with a billet crank, it can easily snap with that much power due to the V8 layout. The Cummins blocks are more robust because they are naturally more balanced as an inline six-cylinder so that you can get more power out of the stock bottom end.

Engine Builder Contributor Doug Anderson notes that with diesel cylinder blocks, unlike gasoline blocks that may only deal with 25-35 pounds of pressure, diesel can be as much as 250 psi! “One of the problems is it tries to lift the head up off the block, so they use a girdle in the bottom of the block and a girdle across the top of the head to try to keep it all in one piece.”

A significant percentage of the money spent on a diesel performance build, according to Anderson, is on the cranks just to withstand the high pressures. “The engine has to be able to withstand the boost and keep the bottom end from blowing up… How many RPMs do you think a pulling engine turns off the starting line? They can turn 6,000 rpm! For a diesel, that’s like hitting 10,000 in a gas motor. The crank weighs 200 pounds, and it’s swing around at six grand with 250-lbs. of boost pressure. There ought to be a law against it! I’ve watched a couple of them blow up, and it’s quite a sight.”

According to Strube, “At the levels I am building for, the most important aspect is to ensure the rotating assembly is balanced. This is key to making the assembly stay intact. When bottom end strengthening is necessary, a girdle usually addresses those concerns adequately. Obviously, studding the mains and cylinder head(s) are a must as well as upgrading the crankshaft in some applications.”

Using a stock block for any performance build has its share of pitfalls, and depending on what you’re building, an aftermarket block or billet block may be the safer option.

“Every platform has inherent weaknesses according to the environment it operates in,” Strube explains. “Stock castings have been heat-cycled thousands of times. Most often, this strengthens the iron composition. However, overheating, bearing failures, decomposition of the iron due to electrolysis, poor coolant/oil contamination will all definitely, result in a shortened lifespan of that foundation.”

The risk of block damage increases the higher you go in boost pressure and horsepower, says Strube. “On a higher output level, the main journal landings can give it up under extreme torsional distortion and result in compromised integrity. This can lead to complete failure where the block cracks/separates, and subsequently, the rotating assembly fails to remain intact.”

Aftermarket billet blocks have tremendous advantages in these prone areas, according to Strube. He says they have significantly increased material strength, reinforced cylinder structures and the increased oiling capacity enable these platforms to withstand exponentially higher output environments. But they are also exponentially higher-priced, and for many diesel performance enthusiasts, a 3,000 hp engine is not in the budget. To this end, some cast iron aftermarket blocks are beefed up in critical areas to handle high power output.

Under normal circumstances, clearances are not an issue on stock blocks if you’re stroking them and adding billet cranks and main caps. Strube says the manufacturers have gone to great extents to provide well-engineered components in most applications. “The issues are encountered when trying to mix components from various companies. Obviously, company A is not going to assume for the design variations of company B and C if one should exist. These complexities are the job of the builder to overcome.”

The biggest challenges builders have with setting up the blocks for a big horsepower build are more from a financial standpoint than anything. Getting customers to understand that power has a price, and there’s only so far you can push the envelope on stock parts, can be a challenge.

“The average application we build for is rarely above 1200 hp,” Strube remarks. “This doesn’t require much in the way of adding to the foundation to support more power. The biggest challenge is developing a clear strategy that provides the customer with a dependable power assembly, capable of withstanding the desired output and remains within the declared financial means.

“Far too often, the customer likes to push the limits of the foundation with less funding than required. There are naturally thresholds for upgrades such as a stock crankshaft or valvetrain assembly. If the limit on a stock crank is, say 800 hp (arbitrary value), some customers like to knowingly push that assembly to 850 hp or more simply because the next level upgrade would be $8k or so and they don’t want to invest that amount. Power desires tend to grow rapidly. Unfortunately, these desires outpace the wallet in some cases!”

Hamilton Cams in Texas makes beefed up diesel blocks for Cummins applications. Their 6.7L block is made for off-road only competition purposes and can conservatively handle up to 2,000 hp. For customers who want big power but don’t want to spend $15k on a billet block, this may be a good solution. The block features a 4.210˝ bore and is machined for 14mm head and main bolt hardware. The seven cam bushings come already installed for 54mm cams. The company says you can push the envelope on valve motion with a 55mm cam bushing upgrade by pressing out the 54mm bushings and pressing in thinner 55mm bushings.

According to their website, the block can handle 3,000 hp in some applications where it is not being loaded hard at low rpm. The higher the rpm that horsepower is made, the lower the peak cylinder pressure. Hamilton says they are currently working on redesigning the block with higher tensile 300mpa cast iron and improved cam oiling and main supports.

As an example of what a complete engine package looks like from builders such as Wagler, their Duramax engines come with the turbocharger kit, fuel system and billet water pump. And they also bump the fuel up with eight S&S Diesel Motorsport 100% over-stock injectors and a 12mm CP3 pump. The Precision Turbo 6870 ball-bearing turbocharger supplies enough air to produce a conservative 800 horsepower and 1,450 ft.-lbs. of torque at the crank!

Remember: the foundation of any engine build is the cylinder block. If you don’t start with a block that is durable enough to support your build, you’ll likely get to see your engine builder again sooner than later. EB

Import Transmission Upgrades
Connect with us