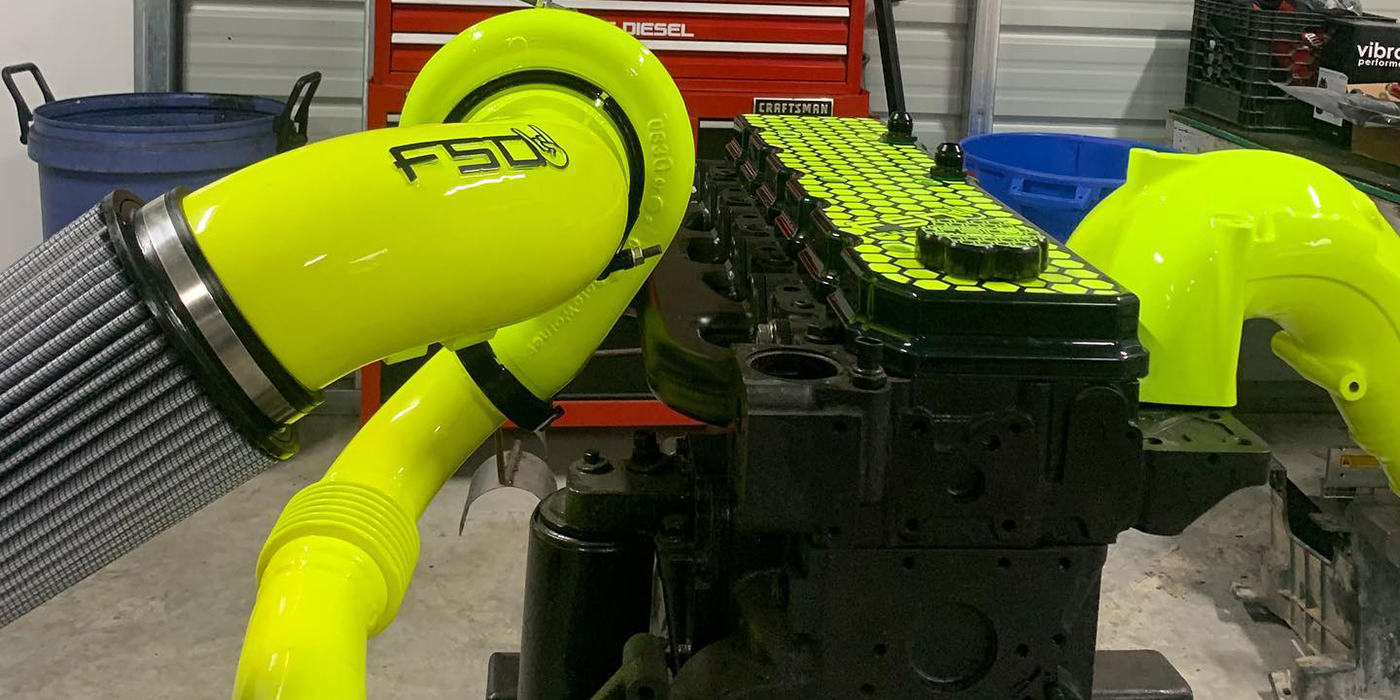 Not even being an active Marine could keep Kevin Kubinak from getting involved in the diesel industry. He started Full Send Diesel two years ago and is helping customers upgrade their diesel engines like this turbocharged 6.7L Cummins.

With an interest in working on diesel trucks ever since he was in high school, Kevin Kubinak spent his adolescence learning, working and applying his knowledge to keep his diesel trucks running well and finding ways to fine tune them. His interest in diesel engine work was so strong in fact that even joining the Marine Corps after graduating high school didn’t stop him from discovering a way to get involved in the industry.

Those early products led Kevin to start Full Send Diesel in Jacksonville, NC, not too far from his Marine Corps base, where he works on diesel engines, develops products and fabricates components for people who like diesels as much as he does.

“Full Send Diesel has only been a legitimate business for about two years now,” Kubinak says. “I started when I was 19 and I’m 21 now. As it progressed, I got a shop and I have moved to a few different locations since. I actually just moved into a new house a couple months ago that’s got a detached 25 by 50 shop on it, which gave me a lot more room to grow.”

Full Send Diesel progressed from doing braided lines to getting into billet pieces and mounts, and is now getting pretty heavy into fabrication.

“We’ve been just cranking out turbo kits left and right,” he says. “We have probably the best 2nd gen swap kit on the market when it comes to the features it has. It’s all stainless steel with a full intake and vibrant HD clamps and intercooler pipes as an option. I really set it apart from what everyone else is doing and tried to make it with all the best everything.”

Kevin’s wife Hailey also helps out in the business during the hours she’s not working as a dental hygienist, and the shop has a few other part-time employees who help Full Send Diesel (FSD) continue to grow. While the shop intends to make parts suited for different diesel platforms, the majority of what FSD does now is for the Cummins platform.

“Almost everything we make is for Cummins,” Kubinak says. “I’m really trying to get into the Duramax and Powerstrokes too. At the moment, the Cummins stuff is definitely keeping me very, very busy and that’s what I know best.”

Kevin has worked on customer’s trucks from all over the United States to Canada and even has growing interest from folks in Australia, but one of the engines featuring a bunch of Full Send Diesel goodies is Kevin’s own 2012 Dodge Cummins Laramie truck with a 6.7L Cummins under the hood.

Used as Kevin’s shop truck, he plans to upgrade the 6.7L Cummins from its current 550 horsepower to more than 1,000 horsepower very soon.

“Very shortly, I’ll have a custom v-banded cold-side intercooler piping on there that I’m about to come out with,” he says. “I also plan to 48 swap it and build a trans and put in about 1,000 horsepower.”

Much like his young and budding business, we can’t wait to see what Kevin has in store for this 6.7L Cummins!

Advertisement
In this article:AMSOIL, Cummins, diesel, Diesel of the Week, Dodge