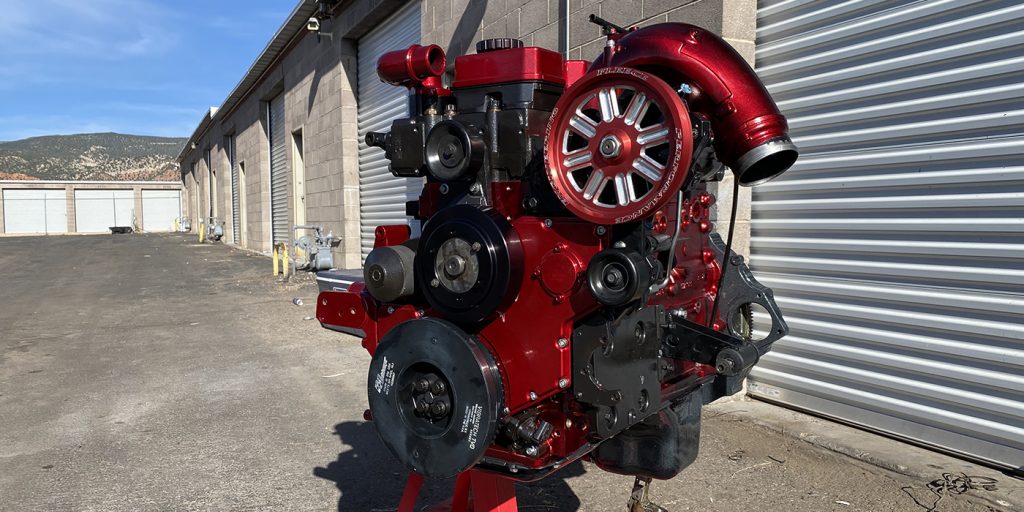 Josh McCormack has gained more knowledge and interest in high-performance diesel engines ever since becoming a sales and tech support employee at Power Driven Diesel in Cedar City, UT, but his true passion for diesel trucks and engines stems back much further than that.

Josh’s dad owned his own company, which required a number of trucks that Josh grew up learning how to fix. Josh also grew up around the sled pulling world as a teenager and the passion has only grown from there.

“I got my first truck when I was 15,” McCormack says. “I started modifying it and learned quickly that California doesn’t have any sled pulling, but we did have a lot of drag racing. I transitioned into more of the diesel drag racing scene. My dad was a big gas guy and we always had to fix his car or the diesel trucks that we had for his job. I learned a lot there.

“When I was in the military, I started modifying my own truck and then my buddies started wanting their trucks modified, so I self-taught a little bit. It’s just been a natural progression. I started with 12-valves and learning about them on the internet and YouTube. Then, I started getting into the common rail.

“Before I worked at Power Driven Diesel, I used to build engines for people out of my garage. Nothing crazy, but I built a number of engines – 6.0L Powerstrokes, Duramax engines and a bunch of Cummins engines. I’m definitely a lot more familiar with the Cummins platform.”

Josh has had a bunch of different trucks over the years, but his current 2005 Dodge Ram 3500 single rear-wheel truck is what he’s taken all over the country drag racing, sled pulling and doing dyno competitions.

“I built the original 6.7L engine three years ago,” McCormack says. “It was supposed to be a towing engine. I put about 45,000 miles on it before it finally let go at like 1,362 horsepower when we dumped a rod. It let go on the drag strip. I ran a 10.00 at 136 mph when the engine let go. I ended up sending all the connecting rods and I thrusted the crank backwards.

“Then, all of this goes through a factory 2005 ECM 848 with Gordon Lindamood of GL Tuning Solutions tuning it. That all goes through a Power Driven Diesel 48RE transmission. In addition, the truck has Yukon chromoly axles in the front and the rear.”

While Josh is certainly more than knowledgeable when it comes to Cummins engines, he didn’t build this 6.8L Cummins completely alone.

“Helping me on this build was my buddy Myer Stump,” Josh says. “He’s the guy who stayed up with me until 2am, 3am and 4am to get stuff done. He was definitely a huge help on the build. If I had a question, I called the component manufacturers. My bosses here at Power Driven Diesel are also no strangers to big horsepower. We have a big UCC truck that we’ve worked on. I helped build both the main engine and the backup engine, so I got to learn quite a bit there.”

Josh also enlisted Enoch Motorsports for block machine work and Nyes Automotive for work on the cylinder head. The goal of this newest build was simple – Josh want a 2,000-horsepower truck that still had a full interior, a full bed, air conditioning, and a factory fuel tank. He wanted a daily driver that could do it all.

“I wanted something that could be street driven,” he says. “I didn’t want a solid block to be completely honest, and I didn’t have money for a deckplate, which is how a lot of guys are doing it. I didn’t really want to give up any displacement because where I live, at 6,000 feet above sea level, turbos don’t spool as well and engines are a little smokier because of the density loss.

Helping the 6.8L reach Josh’s horsepower goals will be a set of triple turbos and four stages of nitrous. Before the engine gets to that point, however, Josh is easing into the horsepower with a single turbo.

“To break in the Cummins, were doing a single 488 Aggressor turbo from Power Driven Diesel,” he says. “Once it’s broken in, the big set up is going to be triple turbos – two 476 turbos feeding a 480 from Forced Induction. We’re doing the break-in now and it’s easier with one turbo to keep an eye on things – the boost pressure is not too high and the torque isn’t as high.

“On our first break-in on the dyno, the engine did 1,200 horsepower and 2,200 ft.-lbs. on fuel. Next, we’re going to start bringing in the nitrous until we hit about 1,500 horsepower on the single turbo. Then, as we see crankcase pressure start to decrease as the rings start to seat, we will put the triple turbos on.”

In addition to the triple turbos, the engine has four stages of nitrous from Nitrous Express on a progressive controller. It also has inter-stage cooling from a water methanol kit and a Fluidampr hanging off the front.

“2,000 horsepower is the goal for this 6.8L Cummins, but the real conundrum we’re facing are the limits of the competition wet block,” he says. “We have enough wastegate, turbo, nitrous, and fuel to do 2,400 hp. I might try to push for a little bit more than 2,000 hp and I want to run that elusive 9-second pass that I’ve been chasing for far too long.

“I wanted the ultimate the industry had to offer and still drive it on the street and enjoy it.”

From the sound of it, Josh is well on his way to exceeding his goals and dreams with this latest build!