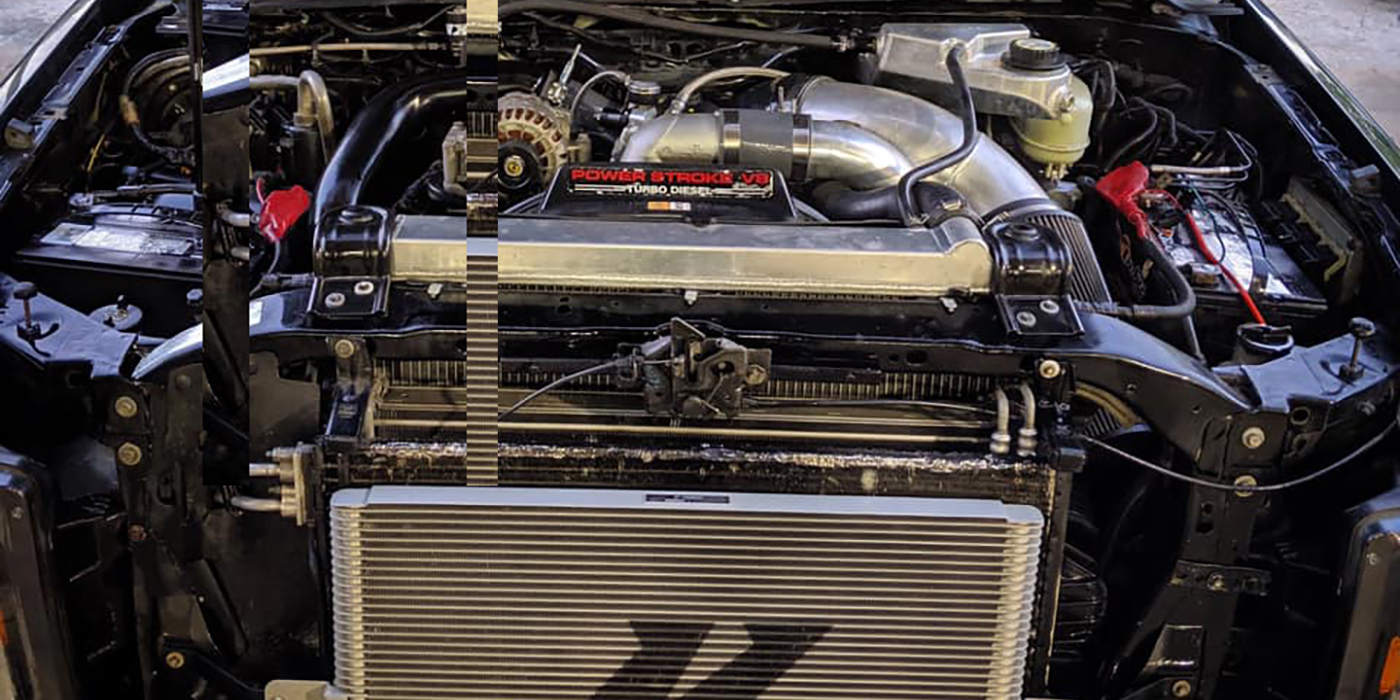 Benito Diaz and his shop, STP Diesel, specialize in Ford Powerstroke work. To showcase what they are capable of, their own daily driver/race truck features a 6.0L Powerstroke engine with a couple bells and whistles. Find out what went into this turbocharged diesel.

Benito Diaz started in this industry right out of high school when he decided to attend the Universal Technical Institute (UTI) in Houston. At the time, Benito had no intentions or any ideas about going into the diesel industry. He was much more interested in gas engines such as the LS platform and imports. But a call from a Mazda dealership offering a job changed his mentality and the rest, as they say, is history.

“I got a call while I was at UTI about a position that was available at a Mazda dealership,” Diaz says. “During the interview, the foreman told me, ‘We’re not really looking for any Mazda technicians, but we are severely backed up on the diesel side of things and it’s really hard to find diesel technicians.’ Back then, diesels weren’t really popular. They were hard to work on and people didn’t really understand them. He asked me if I wanted to try it? I said, sure, I’ll give it a shot. I was already Ford certified through UTI, so I started off as a diesel apprentice working on Powerstrokes at the dealership.”

After about two years of being an apprentice, Benito started turning wrenches on his own and diagnosing diesel trucks. He got experience working on 7.3L, 6.7L, 6.4L, and the 6.0L Powerstroke diesels.

“That’s really where I got all of my knowledge from,” Diaz says. “During the second half of 2014, I got tired of the dealership life and I wanted to do my own thing. I was already kind of doing my own thing on the side at nights and during lunch. I would go do diagnostics for a bunch of the little shops around town. I’d show up, do all their diagnostics and then they’d do the repair.

“Because I was already kind of familiar with the independent shop life, I just decided to do my own thing. I quit the dealership and found a little space in town and my younger brother Tony and I jumped right in it.”

Benito and his brother started Southern Truck Pros, better known as STP Diesel, in a 5,000 sq.-ft. shop space at the end of 2014 with a focus on Ford Powerstrokes.

“It was actually very hard because what [the building’s owner] didn’t tell us is that it flooded in that corner that we were in,” he says. “We would be working on trucks and the rain would rush in and we’d be completely flooded. It was very bad. On top of trying to work on these trucks, diagnose them and handle our customers, we had to worry about all these other things. We hit the ground really, really hard.”

Despite some early struggles, Benito, along with his wife and his brother, overcame those obstacles taking it one day at a time and in 2016 STP Diesel found its current location.

“We were in that shop until 2016 when the owner decided to sell the entire property,” he says. “We had 30 days to get out and that’s when we moved to the location we’re in now. Our current shop has more parking, it’s a bigger shop at 6,000 sq.-ft. and we make it work. It’s the people that make the place at the end of the day. We also lease out space across the street.”

Today, STP has six full-time employees and its primary focus is diagnostics, general repair and performance work for Ford Powerstrokes.

“For many years, my comfort zone was just Fords,” Diaz says. “However, we have since started bringing in Chevys and Dodges. I also brought in some techs who were familiar with those platforms.”

When it comes to the shop’s performance work, STP Diesel has a few of their own Ford trucks they enjoy showing off. One in particular is a 2006 Ford F250, two-wheel drive with a 6.0L Powerstroke under the hood.

“We shortened it, cut the frame and put a 6-foot bed on it,” Diaz says. “We also dropped it and put new wheels on it. That truck is our little race truck. It’s gotten to the point where it’s got a Stage 3 68mm KC turbo in it. It’s got 250% over injectors in it. It’s got a Nitrous Express system on it. A Fass fuel system, a fuel regulator return, an Odawg Stage 2 intake manifold, and it’s also got a little bit of transmission work done to it.”

The F250 is still a daily driver with a stock bottom end and stock cylinder heads, but the last time Benito took it to the track, it ran 11.1 at 120 mph in the 1/4 mile. He says the shop could easily upgrade more of the 6.0L Powerstroke for additional power, but he wants to remain accessible to the kind of customers who come to his shop for work.

“One of the things that we pride ourselves on is being accessible to the average guy,” he says. “The guy who wants something he can play with and work with at the same time. We’ve had plenty of opportunities to completely strip this truck and make it a full race truck, but that kind of goes against what we believe here at our shop. As it is, we’re knocking on the door of 10 seconds. I think we’re in the 10 second range, we just haven’t put it on the board yet.

“We’re not the fastest by any means. There’s a lot of guys out there in the world with diesels that are making glorious times, breaking the boundaries, pushing the limits, but for what we’re doing and what we would classify this truck as, I think we’ve got a pretty good truck.”

With some custom tuning, the 6.0L Powerstroke makes around 760 horsepower and 1,200 ft.-lbs. of torque on nitrous. A pretty, good, little truck indeed.