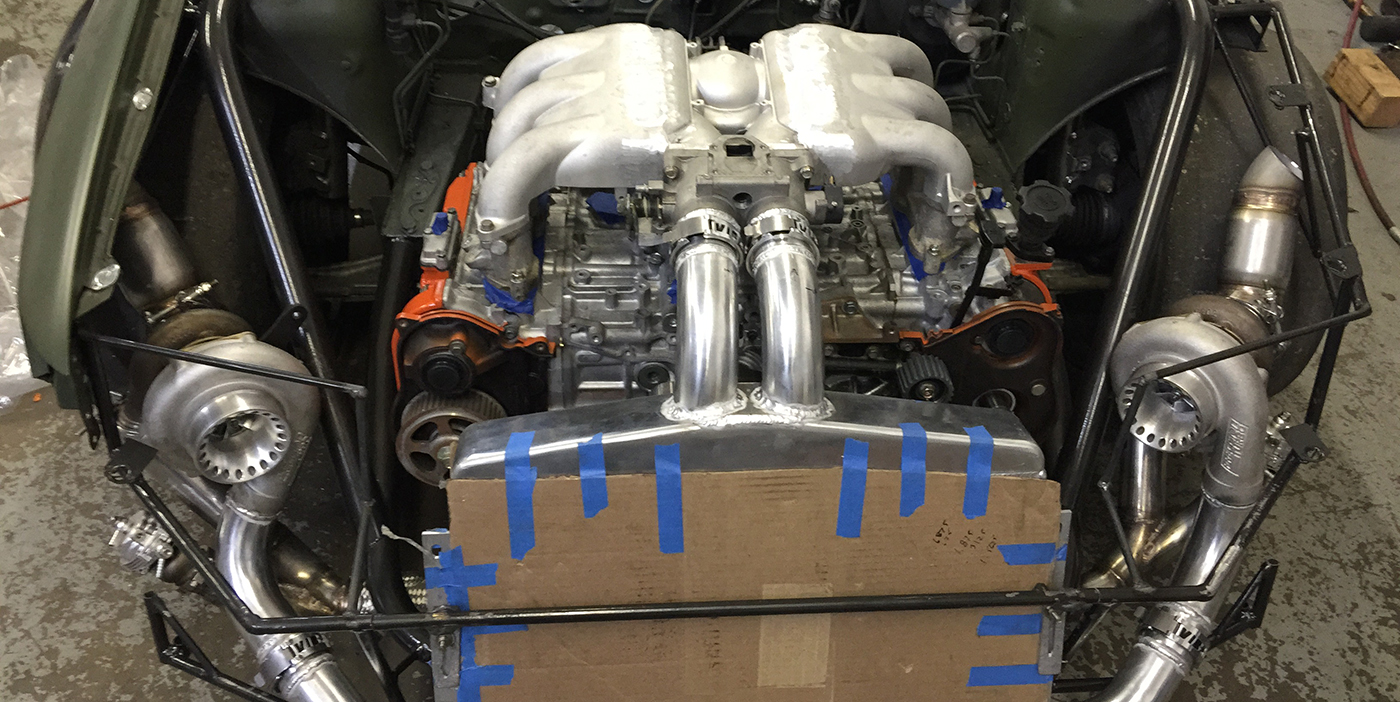 When a former friend and customer tried to steal this twin turbo flat six EG33 Subaru engine after he couldn’t afford to pay for the parts, ASF Machine took ownership of the build and it’s now in a 1993 Impreza sedan with goals of tackling Pike’s Peak. Find out what went into the build!

ASF Machine was founded in 1996 by Jason Abbott who was a tinkerer, backyard engineer and drag racer who grew weary of the old-school mentality when it came to engines and how they were machined. With ASF, Jason set out to change that mentality.

Coupling innovation with modern equipment and a bent on perfection, he was able to produce high quality and consistency. The ASF customer base started to grow by reputation, with customers coming from several states away and even foreign countries to get machine work done.

Nowadays, ASF Machine, located in Grand Junction, CO, is in the care of Joe Hanna, a long-time employee who decided to venture to the helm. Joe has that same perfectionist streak that made ASF the place to get your high-performance machine work done. Joe has been making things go faster for more than 10 years, but his entrance into engine work started well before that!

“My dad taught me to work on the family cars as a pre-teen doing routine maintenance like oil changes and brake jobs,” Hanna says. “As I got older though, I became more interested in partying and awkwardly chasing girls. My father saw this and made me an offer. He said he’d front me the money for a gutted Dodge Dart running an alcohol 440 and a four speed. Being an ignorant and rebellious teenager, I gave his offer the finger.

“Later on, my best friend bought a VW Camper Bus powered by a dual solex air-cooled 1700cc hot rod. Not to be outdone, I bought a 1966 Ford Bronco for $1,200. It was powered by a fire-breathing 170 cid in-line six and backed by an equally awkward three-on-the-tree.”

Joe admits he may have developed an appetite for weirder engines than most gear heads. Later in his teens, he started messing with Bosch mechanical fuel injection pumps on turbo diesels, which inadvertently led to a deep love of turbocharging.

Another deep love enter Joe’s life in his mid-20s, and he found himself married with a newborn son. He also had a job at an independent European repair shop while concurrently holding down a full-time undergraduate schedule in college.

“The heavy schedule and lack of sleep from living with a newborn may have affected my mood,” Hanna says. “My relationship with my boss at the auto shop was degrading quickly. This came to head later that summer when I answered one of his demands with an expletive-laden evaluation of his opinions, ethics and general existence. Rightly and swiftly, I was terminated.

“I visited the county workforce center the next day, on the hunt for a new job. A white notecard on the cork board in front of me read ‘Engine Machinist’s Assistant Wanted.’ I applied for the position that day. A week later, I was scraping gaskets, sweeping the floor and hauling the garbage at ASF Machine.

“Jason, the owner and founder of that shop, bought a second business approximately six months into my employment. I had to learn how to run [ASF] after only being on the job for six months or die trying.”

That was 15 years ago. Today, Joe is still running ASF Machine, which specializes in custom, competition engine builds with a focus on modern Japanese and German platforms.

“Those are our favorite because they pose a challenge and many other builders avoid them,” he says. “Being in Colorado, we organically found a niche in Subaru performance engine building. The EJ boxer four platform can be problematic, which guarantees workflow. It also fits into my MO of favoring strange engines.”

ASF Machine is split into a 2,400 sq.-ft. machine shop and a 2,400 sq.-ft. repair and fabrication shop next door. ASF Machine has three full-time employees with the capability to do all work in-house with the exception of crank grinding and line honing.

“We have Sunnen thermal cleaning equipment, Sunnen cylinder and rod hones, the largest collection of torque plates between Denver and Salt Lake, a Rottler mill, an SVM parts washer, a Sunnen balancer, a Kwik Way valve facer, a Serdi 60 valve and seat machine, a SuperFlow flow bench, a SuperFlow dynamometer and a Land & Sea AWD hub dynamometer, a Clausing mill & lathe, and a three-axis Haas VF2,” he says.

And speaking of organically developing a Subaru engine business, ASF Machine’s own shop car is a Subaru – a 1993 Impreza sedan – which got upgraded with a twin-turbo, flat six EG33 Subaru engine with the aim to make it a Pike’s Peak contender.

“This engine was originally intended for a former friend in 2012,” Hanna says. “It was a labor swap gone awry. The guy ran a ‘fab shop’ next to ASF and we worked a labor trade where I would sponsor machine work on the build if he bought the parts. He would sponsor fabrication to my build if I bought materials. I asked for some money after buying $5,000 worth of parts for his build and he said there’s no way he could cover it. The engine became the property of the shop at that point.”

The client and former friend of Joe’s couldn’t foot the bill for the parts. At one point, the former friend even tried to steal the engine while Joe was out of the shop on vacation.

“I was in Alaska and I got a call from my landlord,” Hanna says. “He indicated that my former friend had contacted him and asked to be let into my shop to grab a few things that belonged to him. Then another call came in from a mutual friend warning me that Mr. Fabricator had bragged to him about having a plan to steal the flat six from me while I was out of town. Thankfully, my landlord was shrewd and suspected foul intentions as well.

“A couples months later, Mr. Fabricator shuttered his shop. Some thugs had taken crowbars to his Land Rover in front of his shop and the IRS was searching for him. Not to mention, quite a few former customers were looking for him too as he had taken deposits from them towards future fab work.”

Needless to say, the build hit a number of road blocks, but fortunately, the EG33 engine stayed at ASF and over the course of five years, Joe was able to build the engine up.

“We started with a used SVX core engine that was purchased on ebay,” he says. “The heads were pulled and the short block was broken down to the case halves. The case was bored for Darton sleeves, parting lines dusted, step milled, line bored and torque plate honed to 97.5mm.

“The OEM crankshaft was micro-polished and dynamic balanced to less than .5 grams. The cylinder heads were ported and polished after testing on the SuperFlow SF110. We performed a three-angle valve job on the intake and a five-angle/radius on the exhaust.

“Additionally, the cam follower bucket bosses were clearanced in our mill for the considerably larger cam lobes. The decks also received a Rottler PCD finish mill to mate well with the MLS gaskets.”