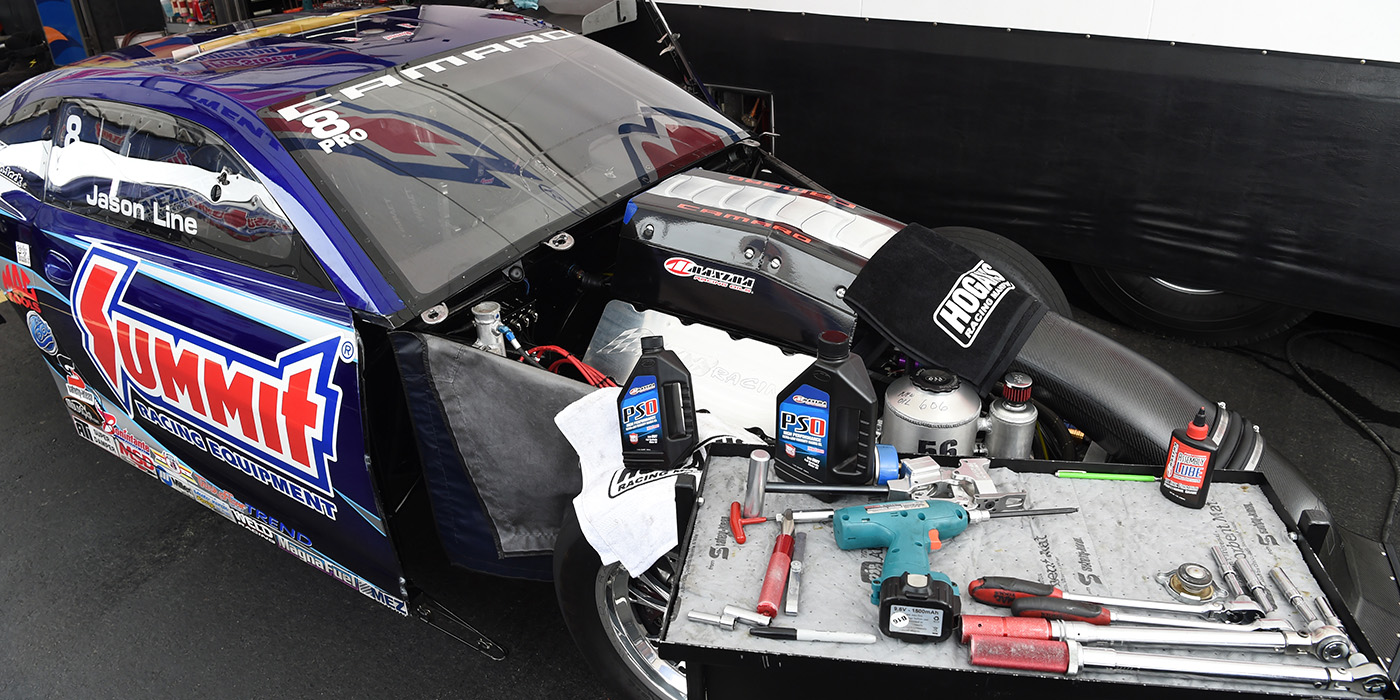 Long before the oil ever enters the equation, the process to facilitate use of power-enhancing, low-viscosity oils begins with the engine builder.

Is thicker better? Well, the short answer is that it depends. If you’re talking about piston crowns, Kevlar body armor or the T-bone steak you’re about to toss on the grill, then thicker is probably better. When you’re talking about engine oil, while thicker seems to intuitively make sense in order to provide maximum protection, a thicker fluid is not always the ideal choice for the application. Many applications will benefit from using the thinnest fluid possible.

Passenger car engine oils (PCMO) and even heavy-duty diesel engine oils (HDDO) have been trending to lighter and lighter viscosity grades for several years now. Where XW-40 and XW-50 were once commonplace recommendations for transportation and commercial vehicles, the standard viscosity grade recommendations for most new 4-wheel vehicles now include XW-30, XW-20 and even the newest official SAE grade XW-16. This trend has been driven primarily by regulatory pressure on OEMs to improve fleet fuel economy, who recognized that in addition to the efficiency gained through hardware improvements, further fuel economy benefit could be realized through the engine oil. The OEMs then worked with oil specification issuers API and ILSAC to implement the first fuel economy specification ILSAC GF-4 back in 2004, which has evolved into the current active category, ILSAC GF-6.

Given the regulatory pressure to improve efficiency, it makes sense that PCMO and HDDO viscosity grades have become thinner. That said, in the absence of regulatory or industry pressure, what would be the motivation for using thinner racing oils? To make more power of course!

The same approaches utilized to improve efficiency through an engine oil can also be utilized to help improve power output. The approach of reducing oil viscosity with the addition of friction modifiers (chemical types that reduce friction between engine surfaces, primarily at low engine speeds in the boundary friction regime) is the other major way to improve efficiency or power output through the oil.

Let’s consider the gains in efficiency to transportation vehicles delivered through the reduction of an oil’s viscosity. One way to visualize the gains is to imagine two test engines running under the exact same conditions (ambient temp and humidity, AFR, load, etc.), but the amount of fuel used is allowed to “float,” essentially letting it fall where it may. Engine “A” uses a 5W-30 oil and Engine “B” uses a 5W-20 oil. At the end of the designated test period, Engine B likely (and should have) consumed less fuel.

The same principle can be applied to visualize how reduced viscosity can be implemented to realize gains in power output. In this case, instead of allowing fuel to float, the throttle is held constant along with the other parameters to deliver an equivalent quantity of fuel to both Engine A and Engine B. Same as above, Engine A uses a 5W-30 oil and Engine B uses a 5W-20 oil. At the end of the designated test period Engine B likely (and should have) produced more power on average across the rpm range, but more specifically, at mid to high engine speeds where oil viscosity plays the largest role (the mixed and hydrodynamic lubrication regimes).

Now, both of the above scenarios have been played out time and time again under controlled testing conditions in engine labs and on dynos across the world, and are repeatable results. I use the term “likely” when referring to the probable outcome because no result is guaranteed due to both test variability and the law of a certain Mr. Murphy, but statistically these results are essentially a guarantee in the long run.

The reason the above results occur is because there is less internal friction occurring inside of the thinner oil itself. The more viscous an oil is, the more it will produce internal drag, which ultimately translates into more drag between the engine parts themselves, bringing down efficiency and/or power. Conversely, the thinner an oil is, the more it reduces this drag and allows for improved efficiency and/or power.

The thicker the oil film is between opposing surfaces in the engine, the thicker the metaphorical security blanket, so the next logical questions are then of course, “Can the same level of protection be achieved with a significantly thinner oil?” and “If yes, then how?” The answers to those questions are multi-part, but nonetheless, adequate levels of protection can absolutely be provided by less viscous oils that are simultaneously helping to increase power output.

Greg’s teammate at KB Racing, three-time NHRA Pro Stock Champion and engine builder Jason Line went as far as to state that oils absolutely need to be thin in order to produce as much power as possible. “Today’s modern drag race engines have evolved in almost every way, including the understanding of oiling systems and the oil requirements for each component. What we once thought was a necessary viscosity for engine longevity has changed for a variety of reasons. It’s no longer a requirement to run heavy weight oils. To make maximum power, lighter weight oils are a must!”

So, while a 0W-16 oil may be easier to accept for granny’s minivan, the above two statements came from two gentlemen who build and drive 2,500+ hp engines and use an oil in these engines that is less than half as viscous as granny’s 0W-16! Is this sorcery? Kind of, but it’s more chemistry than alchemy, and since we’ve now established that thin oils can indeed improve power while maintaining protection – even in monstrous Pro Stock motors – we can discuss the technical aspects of how this is achieved.

Long before the oil ever enters the equation, the process to facilitate use of power-enhancing, low-viscosity oils begins with the engine builder, who dictates which viscosity grade should be used based on the clearances within the engine. It goes without saying that if the engine clearances are appropriate for a 60wt, you probably shouldn’t use a 5W-20. The opposite is true in that if you have an engine designed for an XW-20, you shouldn’t run a 60wt. Aside from creating excess drag, the 60wt will likely be too thick to get where it needs to go, resulting in oil starvation and ultimately failure.

I like to think of the oil film thickness at typical operating temperatures and speeds as an integral part of the engine itself. Once break-in occurs (using an oil designed specifically for break-in and of the appropriate viscosity, of course) and the surface asperities have been worn down, the oil film has now become a part of the engine with an ideal thickness to keep opposing surfaces adequately separated. Deviating too far from this ideal film thickness can result in issues. In my experience, too far usually starts about two weight steps away from the break-in viscosity (e.g. XW-30 to XW-20 or XW-40 are probably ok; XW-30 to XW-10 or XW-50 is probably in the range of starting to not be ok).

I’ve seen engines broken in and initially dyno’d with a much more viscous break-in oil, such as Maxima’s Performance Break-In 15W-50, then dyno’d with a less viscous racing oil like Maxima RS 5W-30. The RS 5W-30 made less power than the break-in oil! My counterintuitive advice to the racer was to switch back to RS 15W-50, which he did, and which then made the expected power gains over the initial dyno run. I’ve seen this same scenario enough times now to know it’s not a one-off phenomenon.

So, what’s happening? I think it comes back to the oil being just like any other engine part where size is critical. Aside from power lost from possible blowby, I think the thinner fluid film allows very slight motion perpendicular to the intended direction of motion, creating an ever-so-slight binding effect that increases drag and results in lost power. Picture what a piston would do if the rings were sufficiently under-sized to allow the piston to move laterally in the cylinder. I think it’s just like that, but at a microscopic scale and enough that it results in lost power. I don’t have evidence that this happens outside of that we haven’t been able to find another culprit that explains this repeatable phenomenon. Regardless of the “why,” the takeaway is that viscosity selection is critical and starts with the engine builder.

Once the clearances are set to allow for a thin oil, the responsibility then lies in the hands of the oil marketer to create an oil that can keep the surfaces apart, which are now much closer together and more liable to come into contact than if the engine were designed for an XW-50. How does Maxima do that? I can’t tell you! Well, I can’t tell you too much – it’s a two-part approach.

The first part of the approach is utilization of a unique and proprietary combination of anti-wear and extreme pressure agents, which provide protection at initial launch when surfaces are most likely to come into contact. During the very beginning stages of launch, loads are the highest and engine speed is the lowest, called the boundary lubrication regime. Under boundary lubrication is when engine parts are the most susceptible to damage, but is actually where oil viscosity itself is least critical. Under these conditions, additive chemistry plays the biggest role in protection and friction reduction, so we of course have to formulate appropriately from that perspective, but just about any viscosity would work here as long as it was sufficiently thin to get where it needs to go.

The next part of the approach is to account for what happens when the engine starts to pick up speed and moves into the mixed and hydrodynamic lubrication regimes. At this point, the additives play less of a role, with the base oil and viscosity modifiers being the major determiners of film thickness, strength and ensuring ring seal. Maintaining the intended film thickness and required strength to prevent collapse and contact between the surfaces is achieved by both using ultra shear-stable polymers that resist mechanical thinning of the oil and utilizing appropriate ester base stocks. Whether it’s the Triple Ester system in the RS Series, or the specialized esters in our 3.1 cSt PS0 Pro Stock oil, these surface-active molecules act like additives at high engine speeds and are the main source of resistance to compressive forces between opposing surfaces.

Lots of companies talk about esters now, but esters really are one of the keys to our exceptional film strength, which ultimately allows the use of very thin oils in high-powered applications. Esters are a very broad category of chemicals, some of which may make fruit smell a certain way or even effect your cholesterol one way or another, so just randomly throwing esters in an oil may not offer much in the way of performance benefits. Nitroglycerin is an ester, for example, and I don’t think that’s something you want pumping around in your crankcase!

If you need evidence to the suitability of lightweight oils in high-powered drag applications or have concerns regarding the use of lightweight oils in these applications, just ask the engine builders and racers who use our products. Provided the proper steps are taken, additional power from the oil can indeed be realized while still maintaining adequate protection. EB

Hoops for High Horsepower
Connect with us