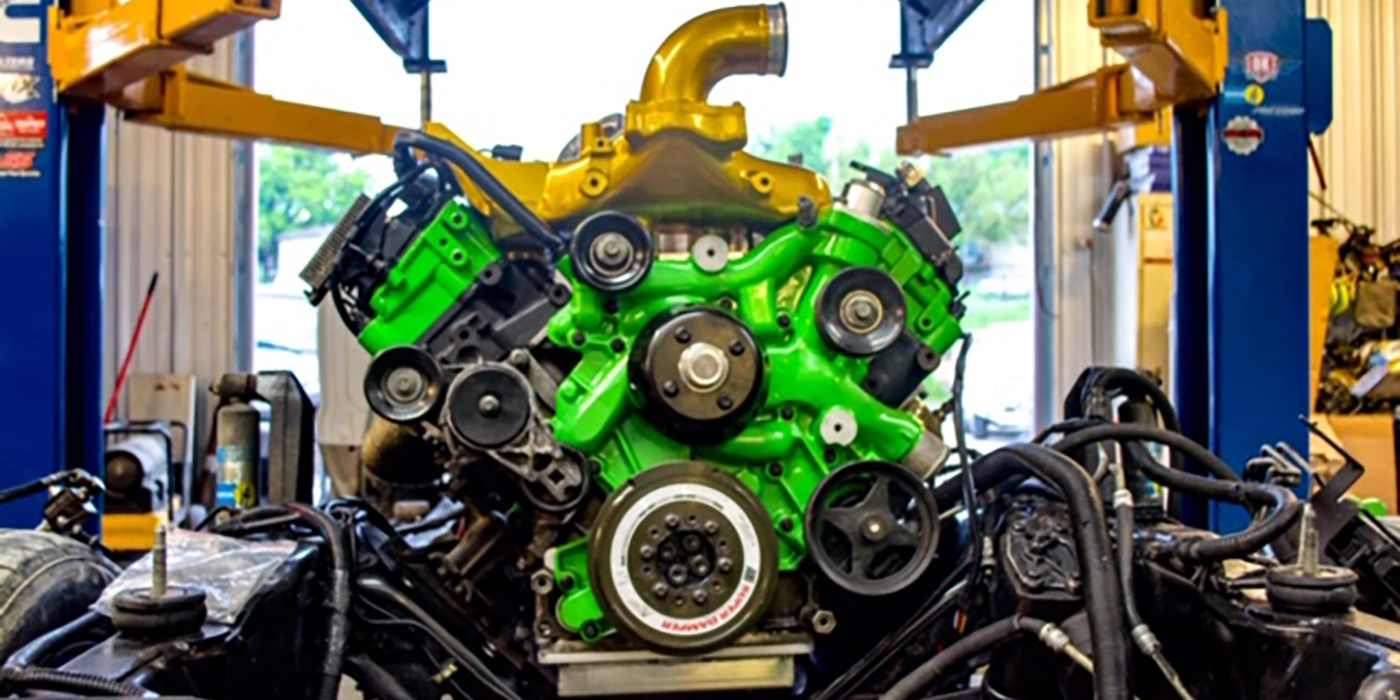 After his original 6.0L Powerstroke engine blew apart while horsing around on the highway, Lawrence Green had Summit Diesel rebuild the engine with the goal of 1,000 horsepower. Find out what went into the build!

If you’re driving around in a Mustang, Camaro or Corvette, Alex Null of Summit Diesel won’t hesitate to leave your ass in the dust behind the wheel of his truck. He’ll even make a little smoke while doing it.

Alex is the owner of Summit Diesel in Weatherford, TX and has been doing diesel repair and building diesel performance for a while now. His entrance into the diesel world happened when he was first helping out at a shop sweeping floors and doing odd and end tasks. One day, the diesel mechanic called in sick leaving no one to work on a 6.0L Powerstroke that needed to get back out the door.

The shop’s owner asked if Alex wanted to take a crack at the 6.0L and the rest is history. “I just got into it and got as deep as I could into diesel,” Null says. “Eventually, I started working out on a ranch in west Texas as a fleet mechanic and I just kept saving and saving and saving with the hope of one day opening my own business. The stars aligned and management pissed me off, so I said, ‘All right, I’m going to go do my own thing.’”

He opened Summit Diesel in June 2018. The shop does a 50/50 split between performance work and regular maintenance, and today Summit has three employees.

“I do work for big fleets, farmers and individual customers – if you’ve got a diesel truck, I’ll work on it,” Null says. “We do all three platforms ­– Cummins, Powerstroke and Duramax. We tend to see more Cummins than anything. I personally specialize in all four platforms of Powerstroke – 6.0L, 6.4L, 6.7L and 7.3L. We do Duramax as well, but we don’t see many here.”

As far as machine work goes, Summit Diesel uses two different machine shops in the area – Motorparts Plus in Kaufman, TX and Farris Racing Engines out of Springtown, TX. Summit Diesel has 2,400 sq.-ft. of space with a one-acre parking lot.

“We’re off the beaten path,” he says. “We don’t have a sign. We’re not on a main street. All of our business is through word of mouth. You’ve got to know somebody to know where we’re at. We just hit our two-year anniversary and we are going to make big power this year.”

The shop builds a lot of diesel performance engines for drag racing and street racing, and is particularly proud of its recent 6.0L builds.

“We have three 6.0L builds going on right now,” Null says. “One of them is expected to make 1,000 horsepower with big injectors, a big oil pump, big fuel pump, and big pistons.”

That particular 6.0L Powerstroke is being built for the shop’s office manager and social media guru, Lawrence Green. Lawrence owns a 2004 6.0L F250 King Ranch. The truck’s engine blew apart roughly a year ago on their way to Street Car Takeover in Fort Worth.

“We were on the highway getting after it and horsing around and I noticed his headlights started fading back behind me,” Null says. “I pulled over and he was like, ‘It’s not good.’ Lawrence’s original engine grenaded at 700 horsepower and flung itself apart. All that was really salvageable were the heads.”

When an engine blows apart, that’s a perfect time to rebuild, and Lawrence, Alex and the Summit Diesel team wanted to up the ante with this next 6.0L Powerstroke.

“We’ve got all the right parts to make 1,000 horsepower,” he says. “We’re running River City Diesel (RCD) rods, Kill Devil Diesel coated and fly cut pistons, an RCD Stage 3 billet cam, a big diesel-sized Adrenaline high-pressure oil pump with 250cc 150% over nozzle injectors. We got a transmission built by Red Diamond – it’s their Stage 2.5 competition trans kit. We have a Bulletproof Diesel oil cooler and external filter, and all the hardware in the engine is from ARP.

“VS Racing does turbos for GT-Rs and import stuff, but we went and met with them and they ensured us their gasoline dual bearing 78mm turbo would hold up to the diesel pressure, so we’re running it and so far so good,” Null says. “It’s a weekend warrior for sure.”