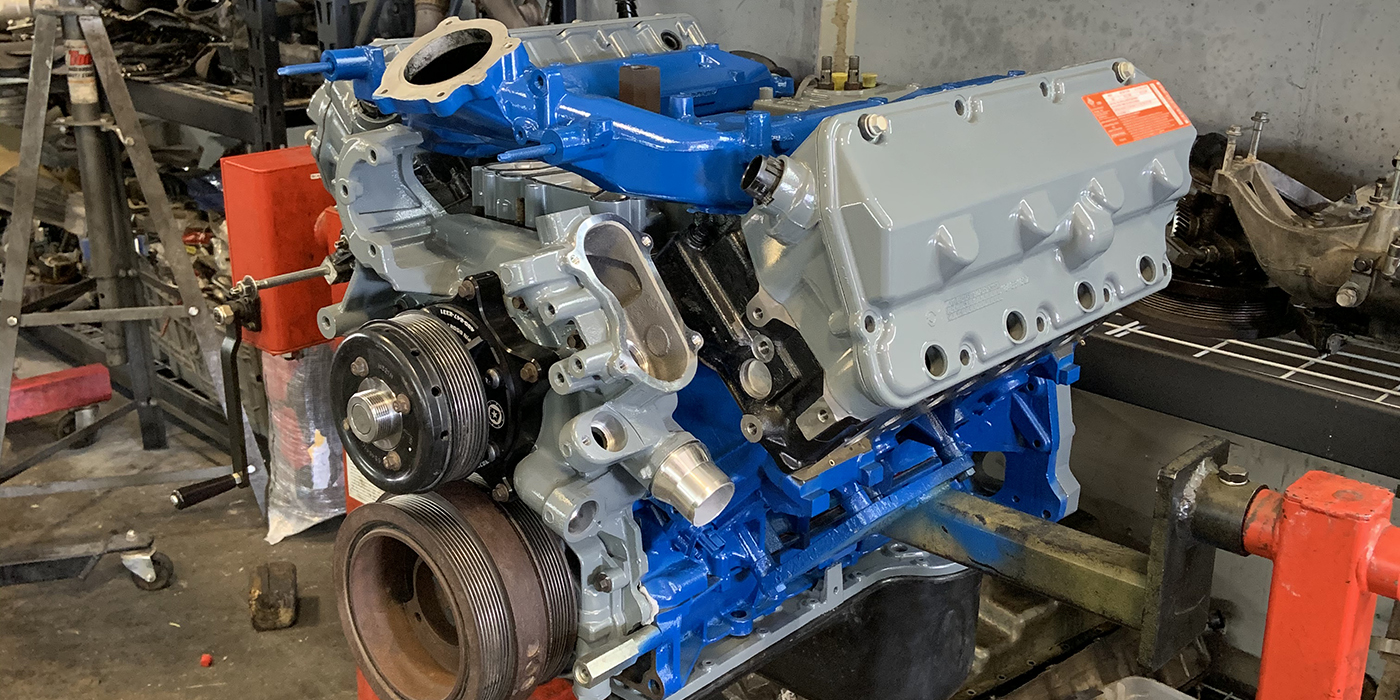 With a dead cylinder and damaged block, a recent Powerstroke Performance customer decided to go crazy on rebuilding his 6.4L Powerstroke, and those are always the best kind of customers. Find out what went into bringing this 6.4L back to life!

If you visit Powerstroke Performance in Las Vegas, as the name suggests, you’ll find a few Ford fanatics. Shop owner Adrian Perez and technician Trever Stokes, in particular, both grew up captivated by the Blue Oval most of their lives.

“I was always a Ford fan,” says Perez. “My family grew up owning Fords. I was known to tinker on my ‘79 Ford. In 2003, my girlfriend’s dad asked me what I was going to do when I got out of school. Of course, I really wasn’t too sure. He asked if I’d be interested in an apprenticeship program at Ford. I said, sure, why not?

“I started off doing gas drivability and all the basics. Back then, in 2003, that was when the 6.0 really started hitting the market, and the dealership went from maybe one diesel technician to being overwhelmed and needing more diesel technicians. I was at the right place at the right time and said I’d like to learn it.”

Adrian spent 10 years working for the Ford Motor Company at different dealerships around Las Vegas before it began to wear on him and he was looking for something new.

“I decided to open up my own thing since I was already kind of known around Vegas for working on Powerstrokes,” Perez says. “I had a little bit of a clientele and it was going to just be me working by appointment only and making a living off of that. It turned into something more than that. I got lucky enough to be able to find people who wanted to do the same thing.”

That’s how Trever Stokes came to Powerstroke Performance not too long ago. According to Adrian, Trever has been a go-getter from the start.

“I got lucky to get Trever,” he says. “He’s a young guy who’s pretty knowledgeable and really passionate. He came here to do a little bit more of the custom builds and not just the repair stuff. He’s a good kid. He knows what he’s doing.”

Of course, that passion comes easy when your favorite engine is a 6.0L Powerstroke. For Trever, it was the sound of hearing a diesel engine run that got him hooked.

“I’ve always been interested in being a mechanic… but what really got me into the diesel side of things was back in 2007-2008, my dad bought a brand new 2007 F350 with a 6.0L in it,” Stokes says. “When he pulled up in the driveway and I heard that crazy diesel sound, I had to know what was under that hood.

“I started out at a little full-service shop and got into the basics. Little by little I started doing more work and when a diesel would come in, nobody would want to work on it. I would step up and do it. I’ve been doing diesel now for two or three years.”

Powerstroke Performance first opened back in 2011, and today, the shop consists of four employees operating out of a 2,500 sq.-ft. shop focused on Powerstroke engine work and repair.

“We are primarily Powerstroke, but we do work on some gas motors like the F250 with the 5.4L in it or the V10,” Perez says. “We’ll do some limited work on those, but I’d say about 95% of the work that comes out of here is all Powerstroke.

“We’ve been consistent with the work that we get done here and thankfully people have been good to us. Vegas is a really small town, so word gets around.”

One of those folks who heard about Powerstroke Performance’s good work was a new customer to the shop who had been experiencing a misfire.

“A year ago, this guy came in with a pretty roughed up F250 with a 6.4L that had seen better days,” Stokes says. “It came in because of a misfire that ended up being a dead cylinder. We gave him the info on how the motor was doing and he said let’s pull it out and rebuild it. He wanted to go crazy with it. We sat down with him to go over parts and upgrades and he pulled the trigger, so we went for it.”

“We kept the factory crank too and just polished it up,” Stokes says. “We used the factory rods, because they’re good for the horsepower the customer was going to be right around. We put in Mahle Maxxforce 7 ceramic-coated pistons, which were de-lipped and fly cut. We did a Stage 2 camshaft and used factory lifters. We got some nice Stage 2 pushrods through Kill Devil Diesel. The big thing was the Kill Devil Diesel cylinder heads, which are an awesome piece. We’re also upgrading the injectors and adding a stroker pump. Lastly, we kept the factory style turbo, which is a Stage 2 aFe BladeRunner. They build pretty good power.”

“I put a lot of blood, sweat and tears into this build,” Stokes says. “I painted it using Ford colors. I used their matte gray and the traditional Ford blue and it ended up coming out pretty good.”

With what this customer now has inside the engine, the fuel system and the turbos, the shop is hoping for at least 800 horsepower with the right tune.