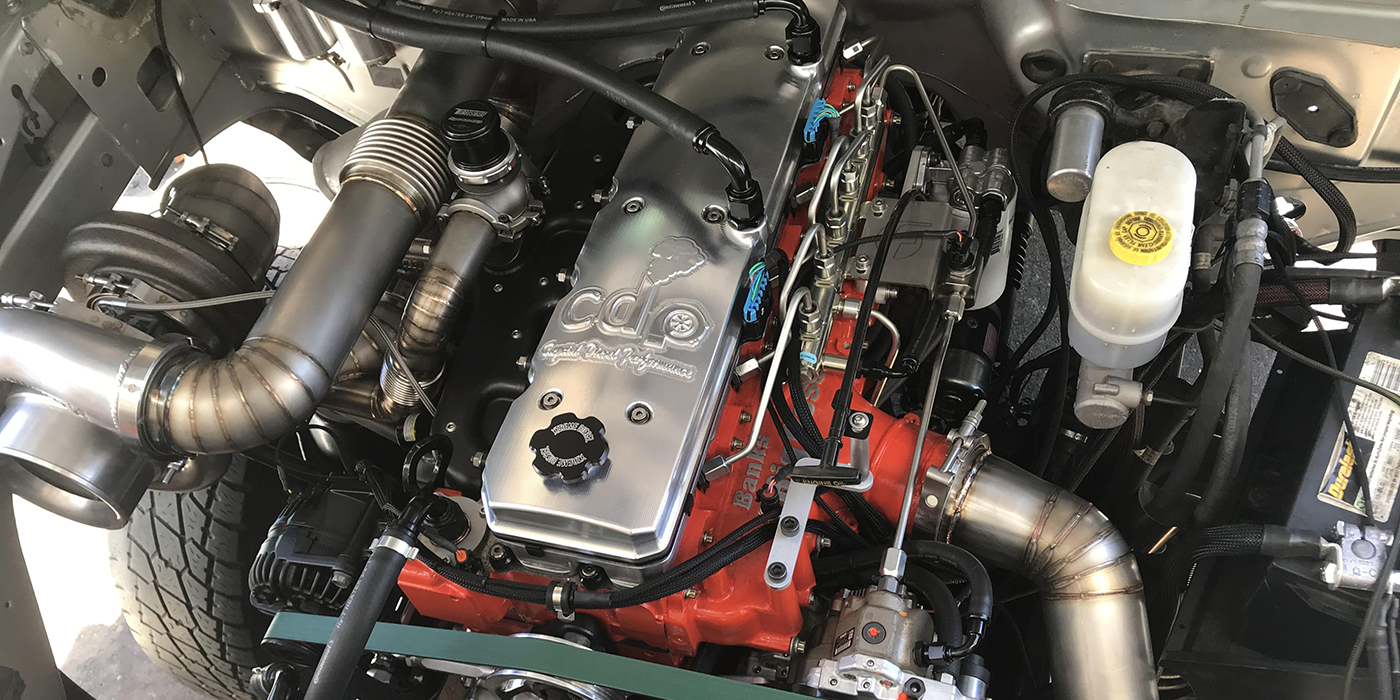 One of the biggest and baddest engine builds Capital Diesel Performance has ever done is a compound turbo 6.5L Cummins, which features a 6.7L block and a 5.9L crankshaft. Find out what went into the build!

When Ken Bruner got his first vehicle – his dad’s old work truck – he found an instant love for all things diesel related. It didn’t hurt that Ken’s dad, a fabricator and a Baja racer, also instilled the values of the automotive industry in Ken at a young age. From there, Ken would make diesel work his passion.

“It kind of spiraled out of control,” Ken Bruner says. “Of course, you start with the tuner and then the intake and exhaust and it just got crazier and crazier until one day I like tried to make my own twin-turbo kit. Once I made one, my buddies wanted some and so I started making more of them.”

“It’s mainly myself, my wife and my brother – it’s a family thing,” he says. “We have three to five employees depending on how busy we are. We’re looking to build a 3,000 sq.-ft. shop in the next year. Capital Diesel Performance is a specialty shop. It’s a performance shop, so I don’t do oil changes or repairs or anything like that. If someone wants a 1,000-horsepower build or something really nice and custom made and designed, those are the projects I take on.”

Capital Diesel Performance does work on Duramax, but Cummins is the real bread and butter of the shop. Capital Diesel also does a lot of its own machining in-house, but outsources its CNC work.

“When I got the 2006 truck, I ran a smaller set of compound turbos – a 363 over a 475, but set up 75% over injectors and ran low 11 seconds [in the quarter mile],” he says. “One season, I decided I was going to build the engine and I pulled the engine out and just started to go to town on it. The truck was down for maybe two or three years while I got piece by piece and part by part made. That truck is built top to bottom by me. I write the tunes. I built the transmission. I did all the drivetrain components. Every tab, bracket and tube has been notched, cut and designed by me. The engine was built in-house as well.”

“It comes out to a 6.5L,” Bruner says. “The rods are Carrillo rods. The pistons are Diamond pistons. They’re 15:1 compression with Total Seal gapless rings. The head was machined in-house and features Haisley Machine 14mm ARP L19 head studs and fire rings. The springs are Hamilton 110 springs. The valvetrain components are Manton. Manton made the trunnions, the rocker stud kit and the pushrods. It’s also got a Hamilton 207/220 camshaft.”

To give the 6.5L enough air, Capital Diesel Performance utilized a compound turbo setup, which included a BorgWarner S476/87/1.0 and a Borg Warner S591/111/1.15 with a Turbosmart 45mm Wastegate, Banks intercooler, Banks side draft intake manifold and a Steed Speed exhaust manifold.

For the transmission, Bruner used a DPC torque triple disk converter (2400 stall), a TCS aermet input shaft, a TCS intermediate and output shaft, a Sonnax servo, Red Alto clutches, and an HTS valve body, which is controlled by the ECM via a Greys Performance transmission harness.

In addition to the engine and transmission work, Capital Diesel Performance also tackled work involving the roll cage and tuning too.

“It’s a UCC-style truck, so the truck is meant to hit the dyno hard, go to the drag strip and run low-9 or 8-second quarter miles, and then do a full pull,” Bruner says. “We’re working on the sled pull hitch right now. We just did the four-link suspension for drag racing over the off season, so it’s supposed to do everything.

“It makes about 1,100 horsepower on fuel only with the wastegates at lower boost. We’re shooting for 1,500 horsepower – that should get us into the 8-second territory in the quarter mile. We just got a 600-horsepower nitrous kit ordered this last off season, so we’re hoping to have that in before Truck Mania in Sacramento, CA in October. That event has a dyno competition, sled pulling and drag racing.”

Now that the 6.5L Cummins is all set up in the Dodge Ram 2500, Bruner says the truck really rips! We have no doubt that it does and here’s to wishing Ken and Capital Diesel Performance good luck at Truck Mania this fall.