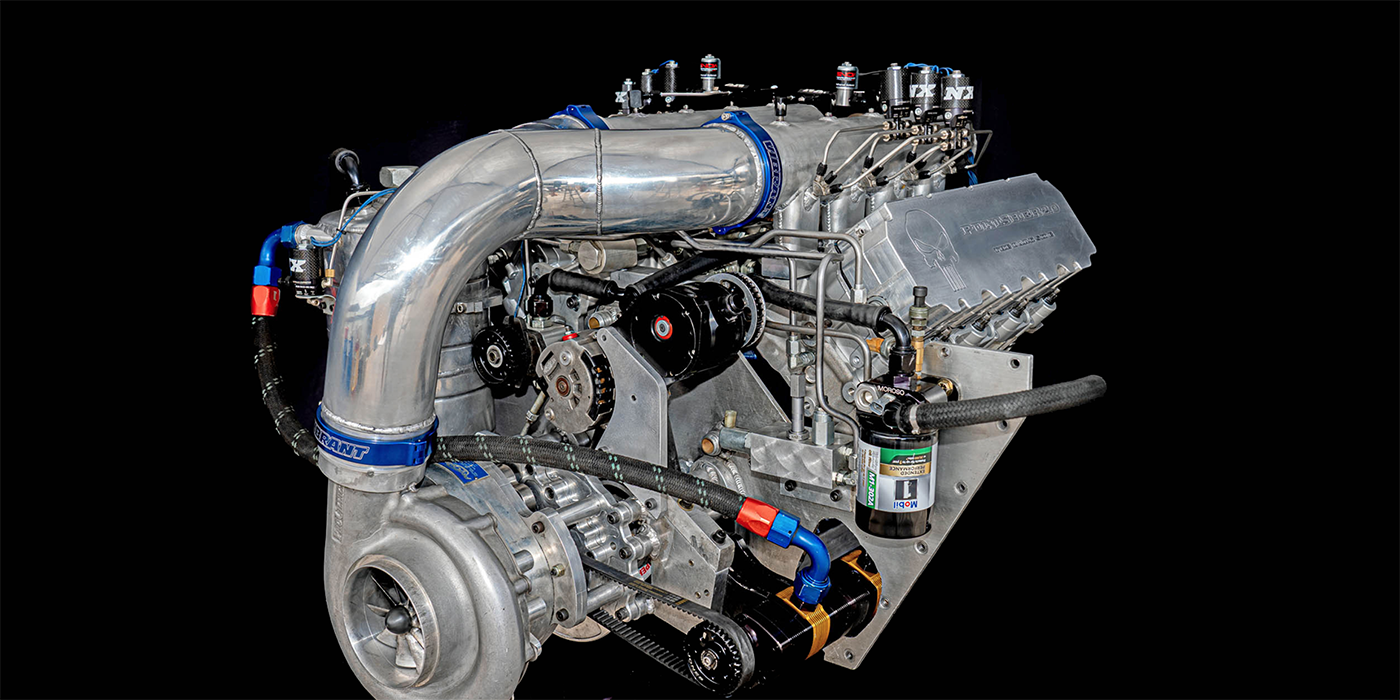 Cass Choate is not a person who can just sweep a problem under the rug. He’s a guy who needs to find a fix and a solution for that problem. Enter one of the diesel world’s biggest problems, the 6.4L Powerstroke. Choate Engineering Performance created a hybrid 6.0L/6.4L with a Procharger and nitrous. Find out what went into the build!

“I am a creature of necessity. They say the author of necessity is the author of invention, so I suppose that’s true in my case,” says Cass Choate, owner of Chaote Engineering Performance in Whiteville, TN. “Somebody asked me one time, how’d you get into this business? I just told them straight up, my truck broke.”

Cass grew up with a farming background and the mentality of when stuff breaks, you don’t call somebody, you figure out how to fix it.

“That’s how I grew up, so we wound up having a lot of experience with a lot of problems,” Choate says. “As I got older, I got more interested in diesel trucks and had my first diesel truck, which was a 2003 Duramax. Eventually, I bought a 6.0L and it broke – it seemed in line with the infamous stories that you hear about it – so I called a friend of mine who worked at Ford. He told me he could fix it for $1,500. I thought, man, I’ve read the horror stories on this thing. If I pay him $1,500 to fix my truck, I’ll be paying him for the rest of my life until I get rid of this thing.

I better figure out how to do it. That’s when I started working on diesels.”

Cass previously spent time buying and selling trucks and also worked as a diesel mechanic before he opened Choate Engineering Performance about seven years ago.

“A friend of mine called me right after I got my 6.0L back together and told me his dad’s Powerstroke broke down,” he says. “I agreed to fix it and that was one of the first ones that I started to do. I would have people bring me vehicles and I was never one to turn away a job, so if an engine came in that needed to be overhauled, I would take it to the machine shop.

“I quickly learned that machine shops are almost to the point of extinction, as far as what they were back in the ‘70s. There are basically only two types of machine shops that I see anymore. One is the high-performance guy doing the racing and hot rod builds. The second are the diesel guys. I tried to find a bunch of machine shops that would do the work for me and really had a lot of problems trying to find quality work, so I got into engine machining and we invested heavily. If you walk into our facility, you can tell where we spent the money. It’s Candyland for a machinist.”

“Once we got into that, we decided we’ve got all these machines, there’s something else that I can do with this,” he says. “What about reverse engineering? That’s the phase we’re at right now. We’ve got a 3D scanner and software that goes with it so we can reverse engineer parts. We generate a tool path so we can machine, replicate and then change. We have a lot of capabilities here.”

Today, Choate Engineering has 14 full-time employees in an 8,000 sq.-ft. facility where the shop will work on Powerstroke, Duramax and Cummins diesel engines and do everything in-house.

“Absolutely nothing is sent out,” Choate says. “Everything’s actually done in-house from crank grinding and balancing to the finished product and assembly.”

While the shop does a large variety of engine work as well as part development, it has been the shop’s Powerstroke work that has gained it the most notoriety, specifically the 6.4L platform.

“The 6.4L platform is just the most hated diesel engine that ever has been,” Choate says. “You would think it was the 6.0L, but the 6.4L has had a lot of failures.”

The shop’s Powerstroke experience led it to build a hybrid 6.4L Powerstroke engine that utilizes a 6.0L block bored over to 6.4L.

“It’s an interesting build,” he says. “There’s really nothing normal about that whole setup from it being in a 1964 F100 pickup to using a Procharger to having four stages of nitrous – it’s a very interesting deal.

“As far as the long block is concerned, it’s a fully sleeved block. We did some testing with C rings for that engine. Instead of it using an O ring set up, it actually uses a C ring set up for the cylinder heads because of some of the flange thicknesses and the materials that we’ve used for the sleeves.

“It uses a ductile iron sleeve that has a Rockwell hardness of 98.6 and it cuts way down into the water jacket. It’s about a 1/4˝ thick on the flange itself and the wall thickness of that sleeve is about an 1/8˝. It’s a very large sleeve. We had to start with something like that to be able to withstand some of the issues that we were having with some of the C ring set ups being just absolutely brutal on the flanges of the sleeves themselves.”

The thing that makes this build especially interesting is that it’s a 6.0L block bored over to a 6.4L. It uses a 6.4L diameter piston with a displacement of 3.830˝.

“It is running a 2816 billet piston from UEM,” Choate says. “We really couldn’t find anything that would work well for what we were doing with a 6.4L diameter piston in a 6.0L block. There was very little offered, so UEM stepped in to help us make some custom pistons. We coated the piston skirts as well.

“It is running Wagler rods and some aluminum CNC-ported heads that we dimple ported. COMP worked with us on a camshaft that would fit our needs for the application. It’s also running Jesel lifters and Harland Sharp rockers. We’re still running the stock 6.0L crank. We haven’t really seen too many limitations of the crank. We’re actually seeing more limitations of the block. The Powerstroke 6.0L cranks have been able to withstand some high horsepower.”

If you’re like us, you may be asking how the hybrid 6.4L Powerstroke idea came about. Cass says he was having issues with airflow that spurred this creation.

“One of the big issues we were having was airflow,” he says. “The factory head flowed about 160 CFM, so we tried to unshroud the valves and you can only port so much out of that head anyways. What we’re trying to do is unshroud the valves to increase a little bit more airflow. That was the intent for the larger displacement. It helps us get some of that air restriction off of that initial valve opening.”

The Procharged 6.4L Powerstroke is just waiting on some injector corrections before some final dyno runs will be done. According to Cass, he expects the engine to churn out 2,000 horsepower for its drag truck application, with the Procharger and nitrous helping the cause.

Advertisement
In this article:diesel, Diesel engines, Diesel of the Week, Ford, Powerstroke