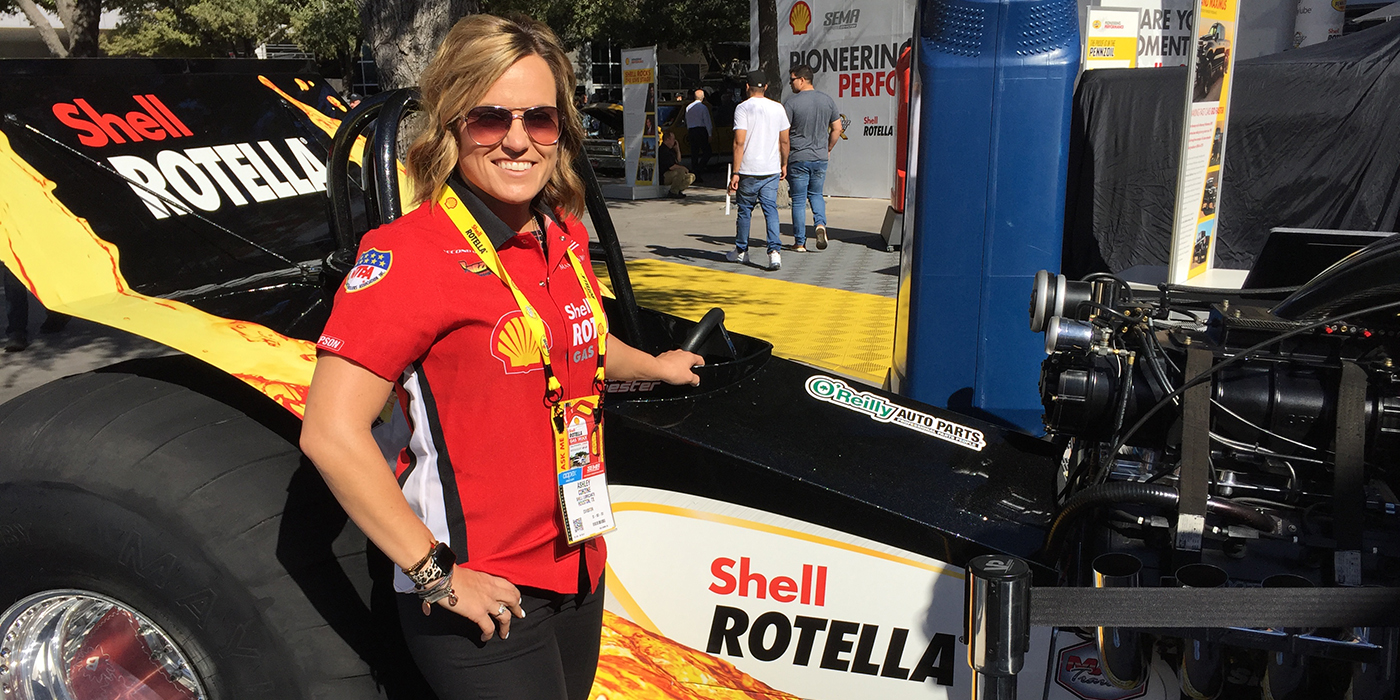 While Ashley wasn’t quite sure how the juggling act of competition and family would ultimately turn out, she admits she’s glad she is in the driver’s seat.

“I don’t remember a time in my life that we weren’t involved in tractor pulling,” says Ashley Corzine, the daughter of the late, great Larry Koester. “My dad has been in the sport of tractor pulling since my very early years of childhood.”

In fact, Ashley was just three years old when her dad lost both his legs in a tractor mowing accident, and the trajectory of the Koester family would forever change.

“In the process of healing, one of his friends wanted to get him into motorsports as a kind of pick me up,” Corzine says. “They rigged up the tractor so that it would work for his amputee situation with his legs. From then on, he and mom took us kids everywhere with them. I don’t remember a time in my life when I wasn’t pulling.

“Dad built a second tractor around the time Adam was in college, and he gave us the opportunity to work on it as well as drive a little bit. I drove just a handful of times and had a little bit of luck at the state-level pulling. I try not to rub it in Adam’s face, but I did get the actual first win on the tractor and that scratched the itch enough for me, honestly.”

From there, Ashley was more interested in the social side of tractor pulling. She became the commentator for their television show for eight years and remained very involved that way.

“I met my husband Craig at a tractor pull in Tomah, WI,” she says. “We have four daughters, so we kind of had our hands full, but both of us love tractor pulling. Since both of us have a love for it and our family, we decided it was time to do something as well.

“In 2012, [we started Corzine Motorsports] and we built a two-wheel-drive truck for Craig to drive. We had our last daughter in 2014, and 13 months later, Craig looked at me and said, we’re building a second truck and you’re going to drive it. I was like, ‘What? Excuse me? How are we going to do this with four children?’ But we did, and in 2015, I started driving my own truck and had some decent success.”

While Ashley wasn’t quite sure how the juggling act of competition and family would ultimately turn out, she admits she’s glad she is in the driver’s seat.

“Once I had my real life in order enough to be able to compete and be a driver, now I tell my husband all the time, he can’t get me out of the seat,” Corzine says. “It’s an adrenaline rush. The competition is so much fun. That 15-20 seconds on the truck is really only 1% of the weekend. We are so incredibly blessed to be able to bring our kids, raise our family in it. Some of our very best friends we’ve met because of tractor pulling and Shell has been phenomenal. They’ve given us a platform to tell our story on and backed us and not only given us a platform, they’ve given us phenomenal products to run as well.”

Ashley and Craig have also remained loyal customers to Ashley’s brother Adam Koester, who builds their engines through Miner Brothers Racing Engines and also competes in tractor pulling. Ashley admits that her first season was a little bit of a learning curve, but it didn’t take her long to adjust.

“The second season was fabulous,” she says. “We came out the gate and I won Bowling Green, which is our largest outdoor event. I won Louisville, the National Farm Machinery Show Championship and I won the Enderle Pull Off, which is the shootout at the end of the season. I was on the top of my game.

“The next year, we pulled again with three trucks. We ran a truck for the season for a friend and figured out that was just way too much to try to do. This past year, 2019, we switched gears all together, sold all three trucks and built what is called a light unlimited. It’s a modified tractor with the big tires on the back.

“The reason it’s called a light unlimited is because we are unlimited on setup. The only specifications are the measurements of the actual tractor itself. It has to have two automotive-style engines on it. It can be any type of supercharger, which we choose to run screw chargers for a little more power. Besides that, it just has to weigh 6,000 lbs., including the driver. It’s really similar to a large mini rod. It reacts the same way. It’s a little more volatile than the trucks. Again, I was on a huge learning curve trying to learn how to drive that tractor.”

For someone juggling four kids and winning tractor pulls, Ashley has never been afraid of the challenges she faces as a woman in motorsports.

“I know that I can go out there and compete with the guys,” Corzine says. “There’s no level of arrogance there, because the moment that you do try to be, you get knocked right back down just like any of the guys.

“The one thing I will give my dad, my brother and my husband credit for is they are definitely more hands-on with the engine. I do what I can and I’m successfully getting a little farther into the engine every time we take it apart and learning more.

“I would say probably the hardest part for me is learning how to manage motherhood with four daughters and being a driver because I have to turn that switch off when I go to the track so that I can concentrate and do my job on the track as well.”

The Koester family lost their patriarch Larry in 2019, but Ashley says it has brought the family together and pushed them to keep competing at the highest levels of tractor pulling.

“Last season was incredibly challenging for our family because we lost our patriarch,” she says. “But it’s also been a bit of a push as well. It gives us a reason to try to do what he did – to tell his story and carry on his legacy. I’m really proud of my brother for stepping up and taking care of all three Koester Racing vehicles and doing a good job with them.

“On the Corzine Motorsports side, I’m pretty excited to say that we’re not only going to compete in the light unlimited division, but my husband Craig will get back in the seat in 2020. We’re going to run the tractor with three engines on it as well as in the modified division. We’ll have to make a few changes in between classes, add an engine, change out superchargers – because different rules apply to that class – but we’re going to get to use the same vehicle more than once in a weekend. That’s really exciting for us.”